There are two theories of rate of reaction :

→ It is necessary to collide reactant molecules for completion of a chemical reaction. As a result of these collisions, the bonds present in molecules are broken and new bonds are formed. This theory can be explained with the help of kinetic molecular theory. According to this theory, when reactant molecules collide with each other then reaction takes place so the rate of reaction depends on the number of collisions of reactant molecules.

→ The number of effective collisions is very less as compared to number of total collisions. Its reason is that first molecules come in activated state and only those molecules, whose energy is equal to or more than activation energy, form products by taking part in reaction.

→ Following are the three main features of this theory:

→ As we know that all collisions can not be converted into products. The collisions, in which molecules have enough kinetic energy (threshold energy) and proper orientation due to which it is easy to break the bonds between reactant species and to form the products by formation of new bonds in products, are called effective collisions.” Example the formation of methanol from bromomethane depends on orientation of reactants. 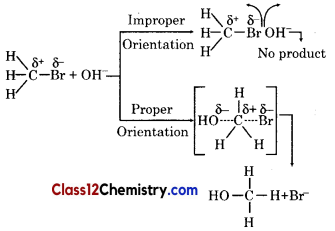 We used a factor P, which is called probability factor for the explanation of effective collisions. So,
Rate of reaction PZAB e-Ea/RT

→ According to this theory, when reactant molecules react with each other then these form activated complex before forming products. The energy of this complex is more than both reactants and products and these remain in transition state. Here, the rate of reaction depends on following two factors :

Step 1. Reactants react with each other and form an intermediate complex.

Step 2. Now intermediate complex breaks in products, Since its energy is high so its stability is also less.