→ Van’t hoff gave a factor to explain reason of abnormal colligative properties of solutions due to dissociation or association, which is called van’t Hoff factor. It is represented by ‘i’. 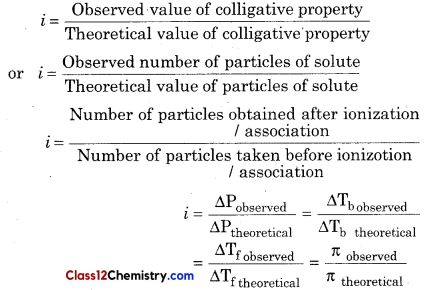 The equation of colligative properties is transformed by dissociaton or association of solute in solution as follows: 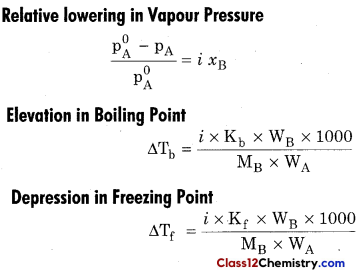 Relation Between van’t Hoff Factor (i) and Degree of Dissociation :

The degree of dissociation (α) can be calculated from this equation.

Relation between van’t Hoff Factor and Degree of Association (α) : 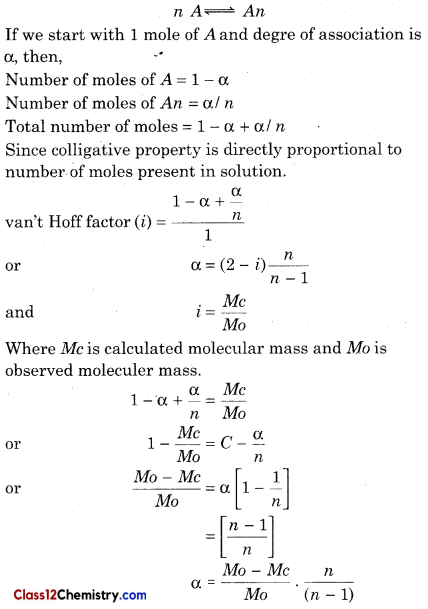 The degre of association can be calculated from this equation.

→ Homogeneous Solution : When composition of solute and solvent is same in each part of solution i.e. the distribution of each component is same in complete solution then it is called homogeneous solution.
Example : Solution of salt in water.

→ Heterogeneous Solution : When composition of solute and solvent is not same in each of solution then such type of solution is called heterogeneous solution.
Example : Solution of carbon and sulphur.

→ Saturated Solution : The solution which is in equilibrium with pure solid at constant temperature and no more solid can be dissolve in it, is called saturated solution.

→ Lasaturated Solution : The solution in which more amount of solute can be dissolved at same temperature, is called unsatrasted solution.

→ Supersaturated Solution: The solution in which more amount of solute is present than required amount for saturation is called super saturated solution.

→ Mass/Volume Percentage : The number of parts by mass dissolved in 100 parts of volume of solution is called mass/volume percentage.

→ Parts Per Million : When the amount of solute is very small then concentration is expressed in parts per million.

→ Molarity: The number of moles of solute dissolved in one litre solution is called molarity of solution.

→ Molality : Molality of a solution is the number of moles of solute present in 1 kg solvent.

→ Solubility : Solubility is defined as maximum dissolved amount (till the formation of saturated solution) in g of solid in 100 g solvent at constant temperature.

→ Hydration Energy : The energy released on hydration of ions present in one mole solid is called hydration energy.

→ Transition Temperature : The temperature at which the solubility curves of any two different crystalline forms meet with each other, is called transition temperature.

→ Absorption Coefficient : The volume of gas dissolved at NTP in unit volume of solvent at constant temperature and one atmospheric pressure is called absorption coefficient.

→ Anoxia : This is a disease found in people living at high altitudes i.e. mountains. In this disease, the people do not think clearly and become weak because pressure is low at mountains due to which the concentration of oxygen in blood and tissues is low.

→ Vapour Pressure : The pressure produced at the surface of liquid by molecules of vapour in equilibrium at constant temperature is called saturated vapour pressure or vapour pressure.

→ Ideal Solutions : Those solutions which obey Raoult ‘s law in all range of temperature and concentration are called ideal solutions.

→ Non-ideal Solutions : Those solutions which do not obey Raoult’s law, are called non-ideal solutions.

→ Boiling Point: The boiling point of a liquid is that temperature at which the vapour pressure of liquid is equal to atmospheric pressure.

→ Ebullioscopic Constant : Ebullioscopic constant of a solvent is equal to elevation in boiling point of that solvent, when a mole of solute is dissolved in 1000 g solvent. Its unit is K kg mol-1.

→ Freezing Point: The temperature at which the vapour pressure of liquid and solid state of a liquid is same, is called freezing point of that solvent.

→ Molal Depression Constant or Cryoscopic Constant : Molal depression constant of a solvent is equal to its depression in freezing point if one mole solute is dissolved in 1000 g solvent. Its unit is K kg mol-1.

→ Semi-permeable Membrane: A membrane which allows solvent molecules to pass through but not the solute particles is known as semi-permeable membrane. For example bladder of pig. parchment paper or synthetic like cellophane etc.

→ Osmotic Pressure : The external pressure applied on solution which is required to prevent the flow of molecules of solvent through semi-permeable membrane and to establish equilibrium at surface, is called osmotic pressure.

→ Reverse Osmosis : If more pressure is applied on solution than osmotic pressure, then the flow of solvent occurs from solution to pure solvent through semi-permeable membrane. This process is called reverse Osmosis.

→ Isotonic Solution : Those two solutions which prevent flow of solvent when separated from semipermeable membrane ie, their osmotic pressure are same are called isotonic solutions. Their molar concentrations are also same.

→ van’t Hoff Factor : van’t Hoff gave a factor to explain abnormal colligative properties of solutions due to dissociation or association, which is called van’t Hoff factor.