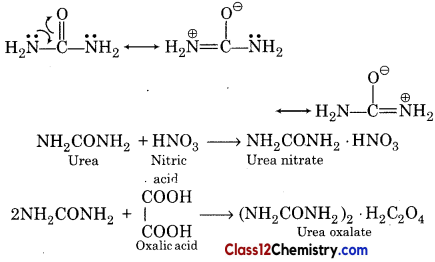 → Hydrolysis: Hydrolysis of urea take place with dilute acid, base and at high temperature.

→ Hydrolysis of urea takes place at normal temperature in the presence of enzyme urease.

→ From Nitrous acid : When urea treated with nitrous acid, it decomposes into nitrogen and carbondioxide gas.

→ From Sodium Hypobromite In the presence of alkaline sodium hypobromite (NaOBr) urea decomposes with release of nitrogen gas.

→ Carbon dioxide gets dissolve in basic medium. Hence, by measuring the volume of nitrogen gas released, amount and percentage of urea can be estimated.

→ From Dicarboxylic Acids : In the presence of phosphorous oxychioride, urea form a cyclic compound by reacting with dicarboxylic acids. 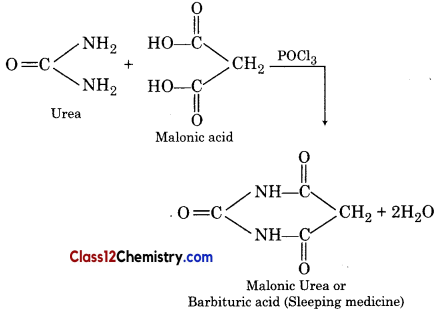 → Biuret Synthesis : When urea is heated slowly at 155°C, two molecules of urea react with release of ammonia and gives biuret, a white cystalline solid.

→ Above reaction is a test for urea because on adding alkaline solution of copper sulphate to white solid biuret, violet colour is obtained.

→ When urea is heated strongly at 17O°C cyanic acid is formed which then trimerises to form cyanuric acid. 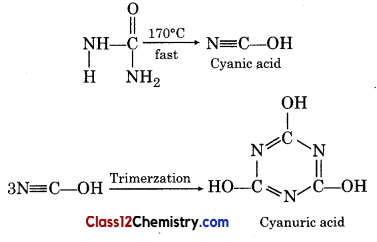 → From Formaldehyde : In the presence of acid or base one molecule of urea reacts with two molecules of formaldehyde and form dimethylol tarea.

Urea is a white crystalline solid. Its melting point is 132°C. it is easily soluble in water and insoluble in organic solvents.