→ It includes theres isomers which can be converted into one another at normal temperature. The essential energy for free roEation is 5-15 kcal/mol, which can be easily available at room temperature. Free rotation about carbon-carbon double bond is not possible.

→ Restricted rotation can be represented by nail model. Two card boards are coloured by some colour on one side and a nail is kept in between them as shown in figure. The card boards can be rotated freely with respect to the nail. This shows free rotation. But if two nails are placed parallel then free rotation is not possible to change the position of card boards, it is necessary to remove nails.

→ This is restricted rotation. Compounds having double bonds and cyclic compounds show same behaviour which is responsible for geometrical isomerism. 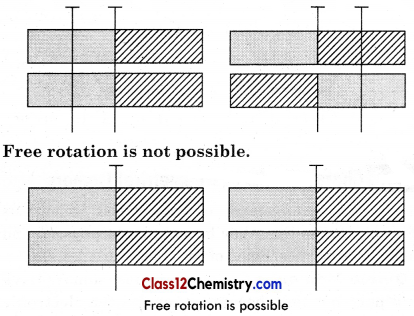 The compounds having geometrical isomerism should satisfy following two conditions:

→ Geometrical Isomerism In Alkenes : In Alkenes, due to presence of carbon-carbon double bond, free rotation is not possible. If two carbon atoms containing double bond are attached to different substituents, then two stable configurations are possible in space. 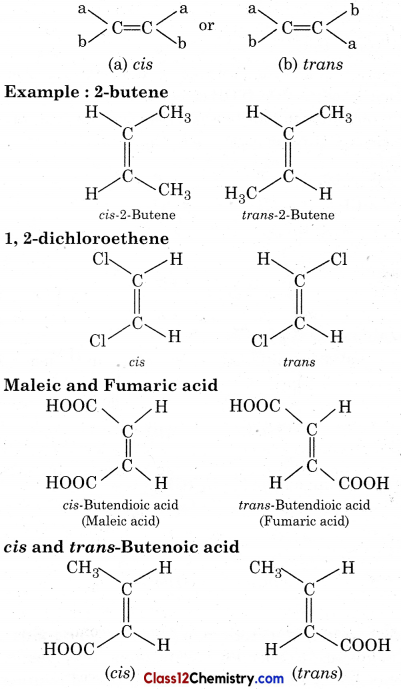 → It should be noted that if any two substituents on the carbon atoms containing double bonds are same, then geometrical isomerism is not possible in such compounds. For example:

→ Above compounds do not show geometrical isomerism because on changing the position of substituents. no new configuration is obtained.

→ Geometrical Isomerism in Oximes : The reaction of aldehydes and ketones with amines gives aldoximes and ketoximes as:

→ It is clear that in C = N, C and N are in sp<sup>2</sup> hybridisation. Due to presence of double bond, free rotation is not possible. If OH group on N atom is present on side of hydrogen attached to carbon or to small group, then cis and if on opposite side, then trans isomer is possible. For example : Acetaldoxime 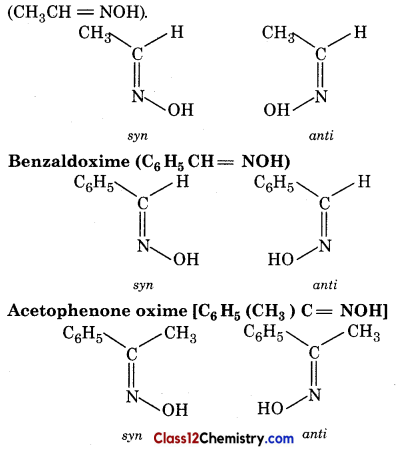 → Geometrical Isomerism ¡n Alicylic Compounds: Disubstituted cycloalkane derivatives like cyclopropane, cyclobutane, cyclopentane etc. have restricted rotation due to cyclic structure. These compounds also show cis and trans geometrical isomerism. If both the substituents are present on same side of plane, it is cis isomer and if they are present in opposite side, it is isomer. Some exampks of geometrical isomerism in alicyclic compounds are: 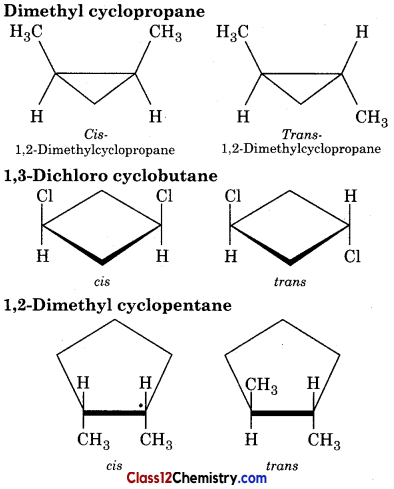 The spatial arrangement of geometrical isomers is different. Due to this, they have different physical and chemical properties. Some of the characteristics are: 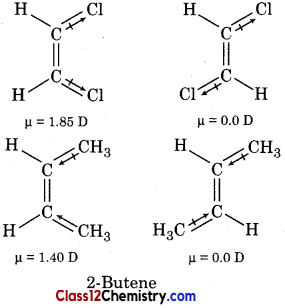 → If the isomers are such that substituents present on both the carbon atoms have opposite electronic effects then dipole moment of-1.is isomer will be relatively low. For example: 1-chioropropene 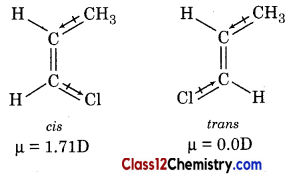 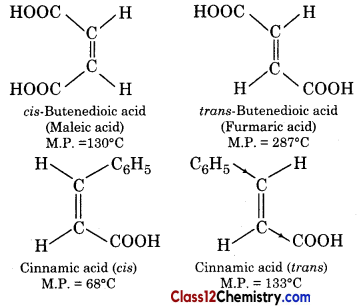 → It should be noted here that if such substituents are present which have opposite effects, then melting point of cis isomer will be high.

→ Chemical Properties : The functional groups in cis isomers are on one side which can easily undergo cyclisation but it is not possible in trans isomer. For example, maleic acid undergoes dehydration to give maleic anhydride on heating at 140°C but its trans isomer, Fumaric acid, does not show such reaction under the same reaction conditions.

→ This is because the later has two —COOH groups farther away and hence it undergoes dehydration to give maleic anhydride on heating at 270°C be cause it. is first converted into maleic acid and then it is dehydrated. 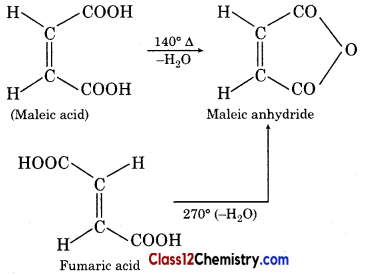 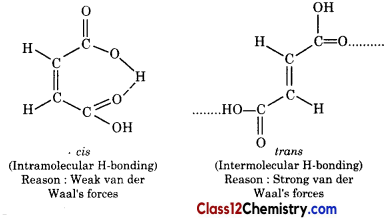