On the basis of dispersed phase and dispersion medium, colloidal solutions are classified in various types which are given in table 5.4:

Colloids are classified as follows:

→ On the basis of affinity of dispersed phase for dispersion medium : According to this classification, colloidal solutions are of two types:

→ In lyophobic colloids, the dispersed phase and dispersion medium have very little affinity for each other. So these sols are not stable. They are readily precipitated or coagulated on addition of small amounts of electrolytes by heating or by shaking. If such colloidal sols are once precipitated they do not give back the colloidal sol by simple addition of the dispersion medium. Hence these sols are also known as irreversible sols. These sols require some stabilizing agents for their preservation.

→ The main points of differences between lyophilic and lyobhobic colloids are give in table 5.5

Differences between lyophobic and lyophilic colloids. 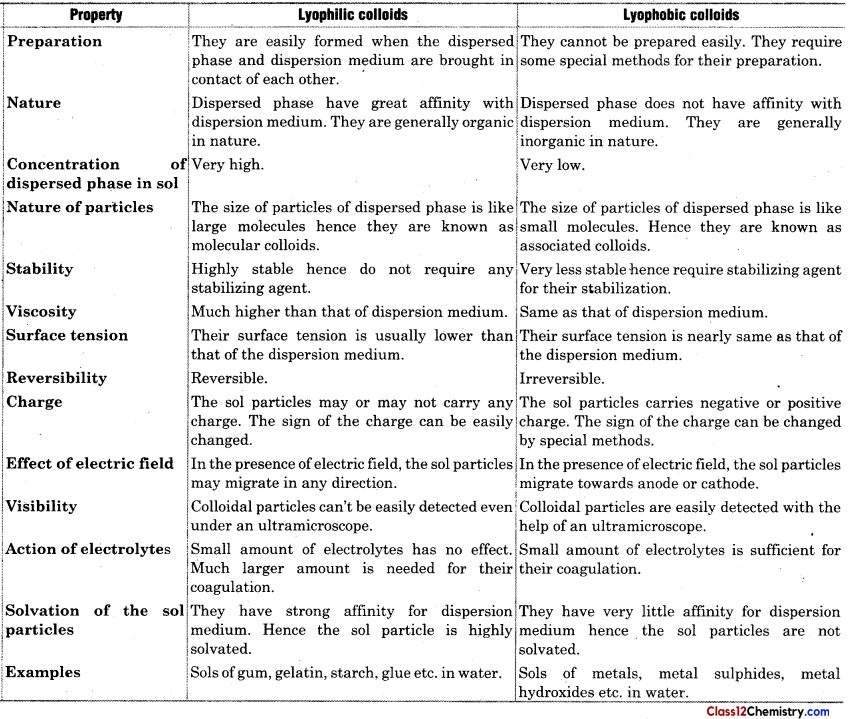 On the Basis of Particles of Dispersed Phase : On the basis of structure of colloidal particles, the colloids are classified into following types:

→ Micro-molecular or multi-molecular colloids : When a colloidal particle is made up of aggregates of atoms or molecules with molecular size less than 1 nm, then it is called multi-molecular colloid. For example, a gold sol may contain particles of various sizes having many atoms. Sulphur sol consists of particles containing a thousand or more of S, sulphur molecules. Moreover silver sol, albumin sol, silicone’s sol etc, are the examples of such class.

→ Associated colloids or micelles or micelle colloids : There are some substances which behave as strong electrolyte at low concentration but at higher concentration they show colloidal behaviour due to the formation of aggregates. These aggregate particles are called as micelles and they are also known as associated colloids. These particles are associated due to the presence of cohesive forces or van der Waal’s forces. Examples: soaps and detergents.

→ Example : CMC of soap is 10-4 to 10-3 mol L-1. It should be remembered that at CMC, several properties of solutions of surface active agents such as molar conductance, surface tension and osmotic pressure undergo a dramatic change.

Anion (C17H35COO–) obtained from ionisation can be written as: 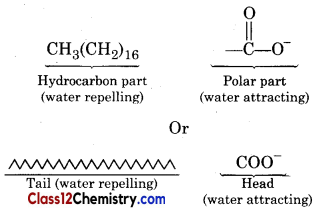 → At critical micelle concentration, the anions (C17 H35COO–) are pulled into the bulk of the solution and aggregate to form a spherical shape. In this spherical shape the long hydrcarbon chain (tail) which is insoluble in water is directed towards the centre while the soluble polar head is on the surface in contact with water. This aggregate with spherical shape is known as ‘ionic micelle’. These micelles may contain as many as 100 such ions (C17H35COO–).

→ Similarly in CH3(CH2)11 SO4– Na+ the polar group is -SO42- along with the long hydrocarbon chain. The mechanism of micelle formation of detergent molecules is same as that of soaps.

→ Cleansing action of Soaps : As we have discussed earlier that a micelle consists of a hydrophobic hydrocarbon like central core. During cleaning, soap molecules form micelle around the oil droplet in such a way that hydrophobic part of the stearate ions is in the oil droplet and hydrophilic part projects out of the grease droplet like the bristles.. 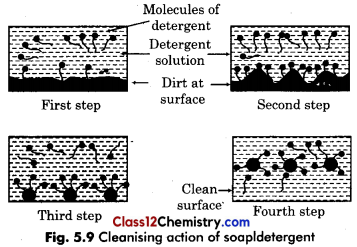 → The polar part of stearate ion can interact with water so the oil droplet surrounded by stearate ions is now pulled in water and gets detached from the dirty surface of fabric. In this way soap helps in emuslification and washing away of oils and fats. The negatively charged sheath around the globules prevents them from coming together and forming aggregates.