→ The upper or top layer of any substance is known as its surface. Various properties of the substances mainly of solids and liquids are related to their surface. For example, the behaviour of the molecules of liquid present on the surface is quite different to those molecules of liquid which are present in the interior. We can understand it as the molecule present within the liquid is attracted equally in all directions by the surrounding molecules.

In this unit, we will study some important surface phenomena like adsorption, catalysis, colloids, emulsion and micelles etc.

Adsorbate : The substance which gets adsorbed at any surface is called adsorbate.

Chemical Adsorption: When the forces of attraction existing between adsorbate and adsorbent are strong chemical bonds, then the adsorption is called chemical adsorption.

Critical Temperature : The minimum temperature, above which a gas cannot be liquified even at a very high pressure, is called critical temperature.

Adsorption Isotherm : The relationship between amount of adsorption and pressure of gas at constant temperature is called adsorption isotherm.

Homogeneous Catalysis: If the reactants, products and catalyst are in same phase then this type of catalysis is known as homogeneous catalysis.

Heterogeneous Catalysis: If the catalyst present is not in same phase as reactants and products in a chemical reaction then this type of catalysis is called heterogeneous catalysis.

Positive Catalyst : The catalyst which can increase the rate of a chemical reaction is called positive catalyst.

Negative Catalyst : The catalyst which can decrease the rate of a chemical reaction is known as negative catalyst.

Auto Catalysis : During a chemical reaction, when one of the products formed behaves as a catalyst and increases the rate of reaction then such catalyst is known as auto catalyst.
Example:

Catalytic Poison or Inhibitor : The substance which destroys the activity of a catalyst is called catalytic poison.

Catalytic Promotor : The substances which can increase the efficiency of catalyst but themselves are not catalysts are known as catalytic promoters.

→ Colloidal Solution : It is an intermediate state between their solution and suspension. The size of their particles is in between 1 nm to 1000 nm.

It has two phases :

→ Positive Colloids : The colloidal solutions in which the particles of dispersed phase have positive charge then they are called positive colloids. Examples:
Metal hydroxides Al(OH)3 Fe(OH)3 etc

→ Negative Colloids : The colloidal solutions in which the particles of dispersed phase have negative charge then they are called negative colloids. Examples:
Metals like Au, Ag. Cu, Pt, Fe, Cd, Soil etc.

→ Lyophilic Colloids : The colloidal solutions which are directly formed by mixing substances like gum, gelatin, starch, rubber etc., with a suitable dispersion medium are called lyophilic colloids. Here the dispersed phase and dispersion medium have high affinity for each other. 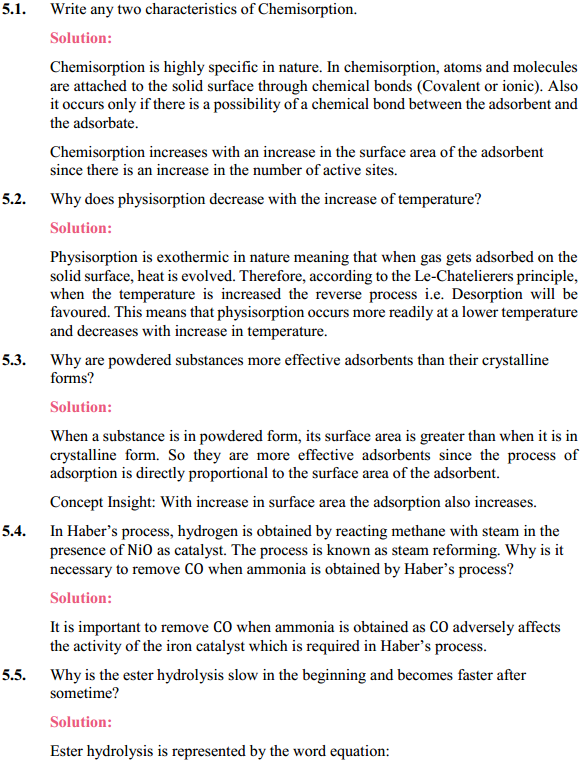 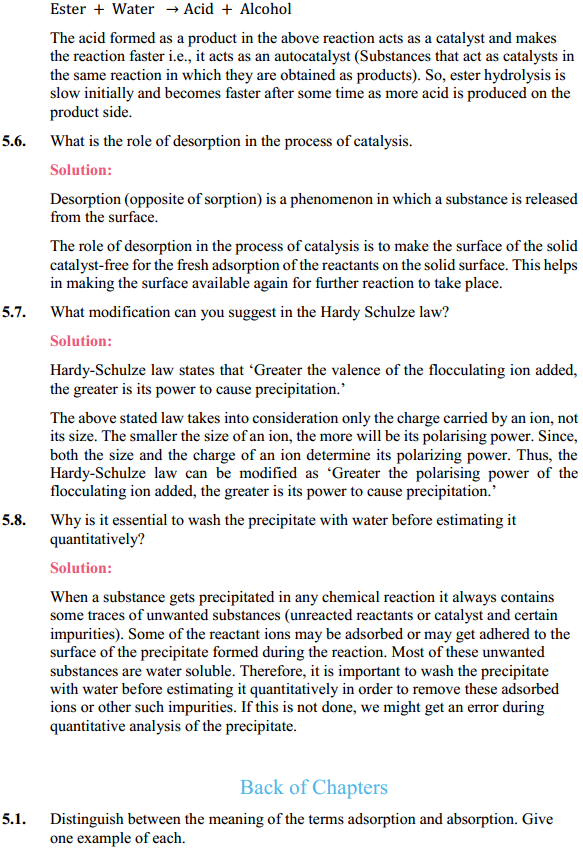 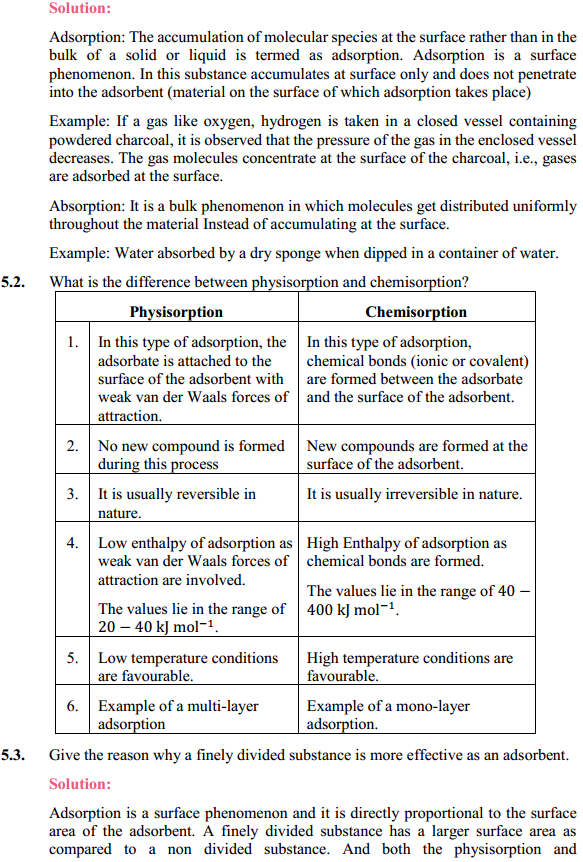 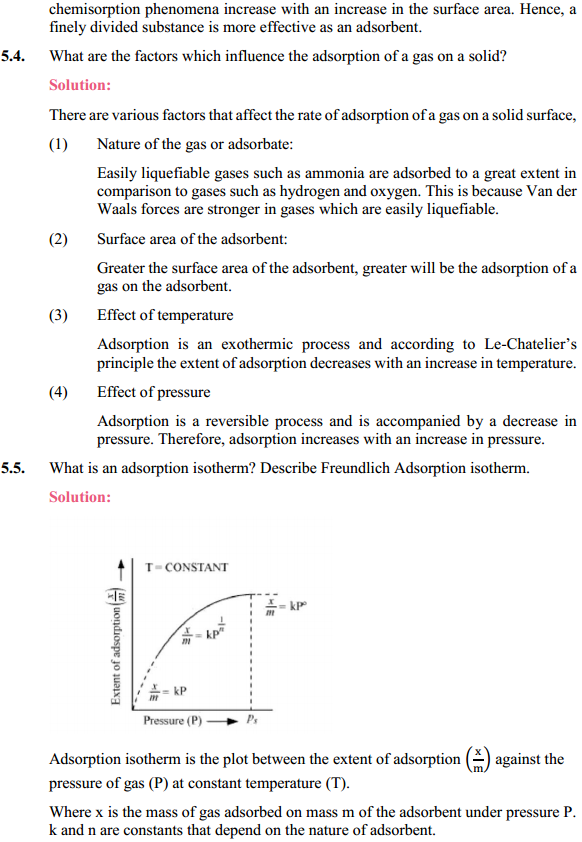 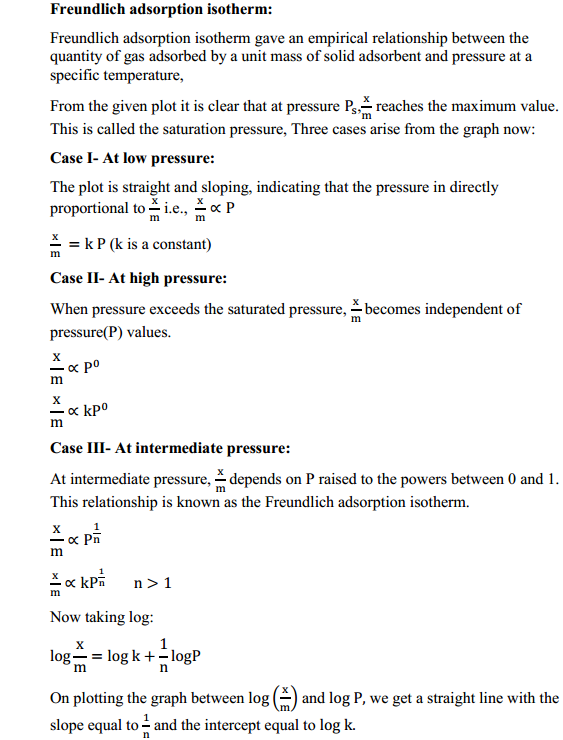 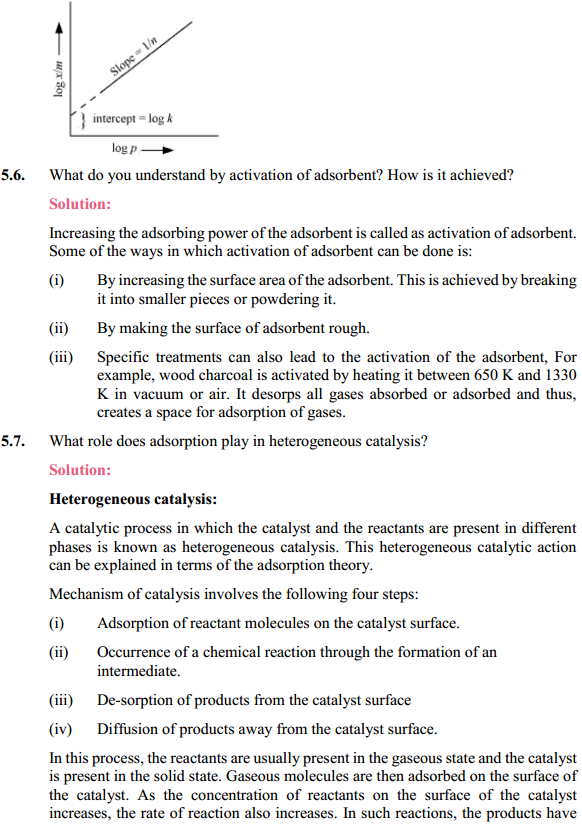 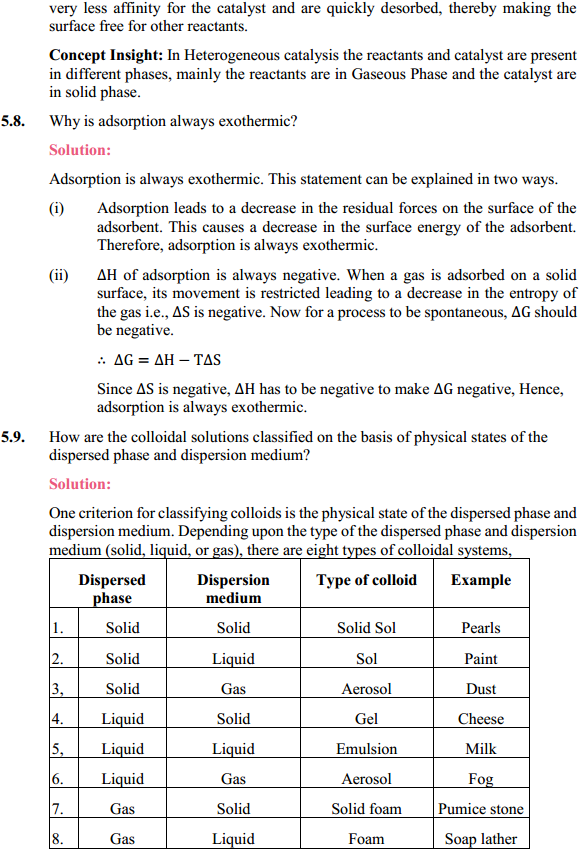 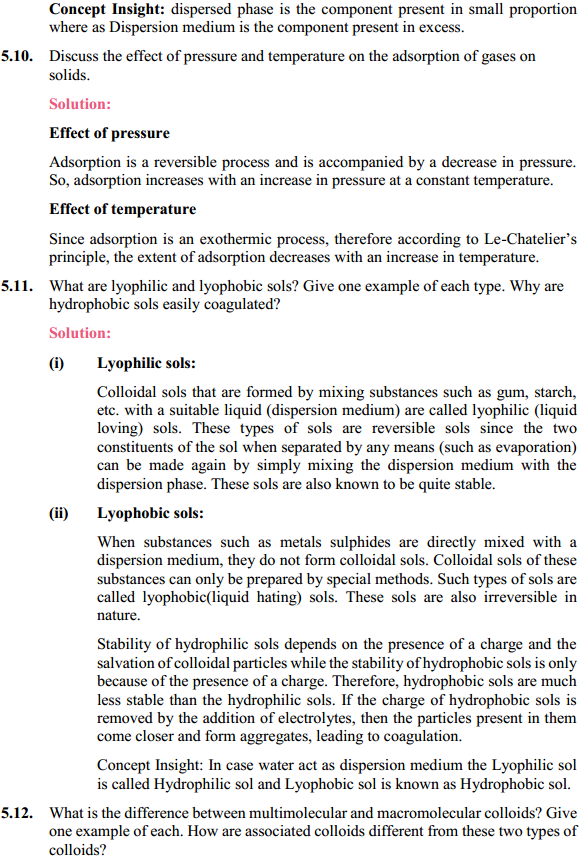 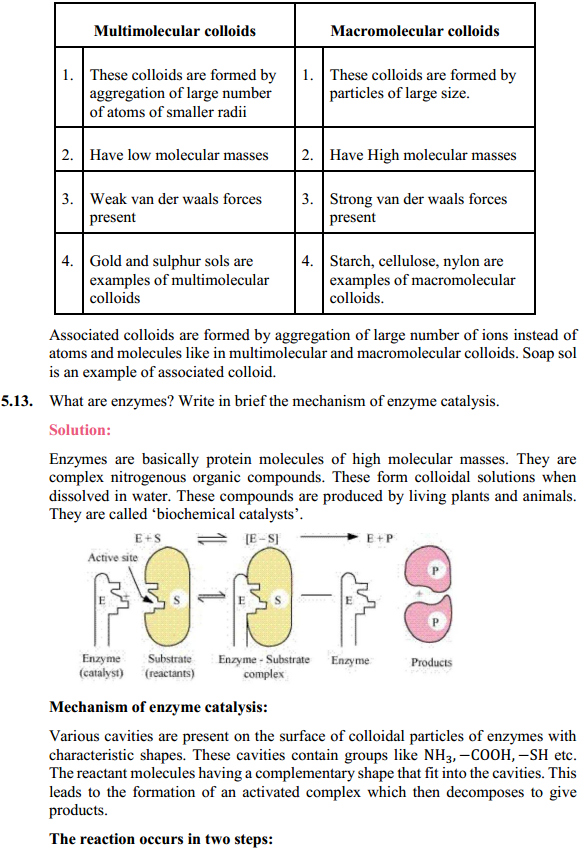 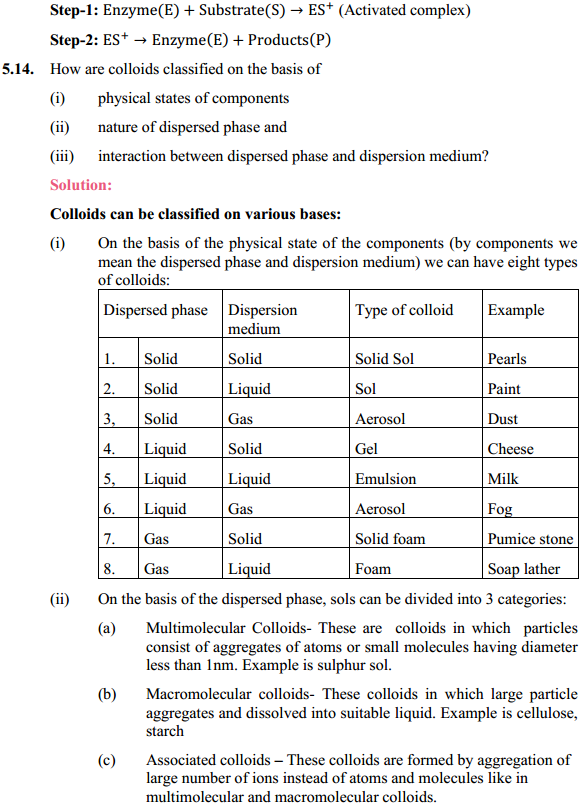 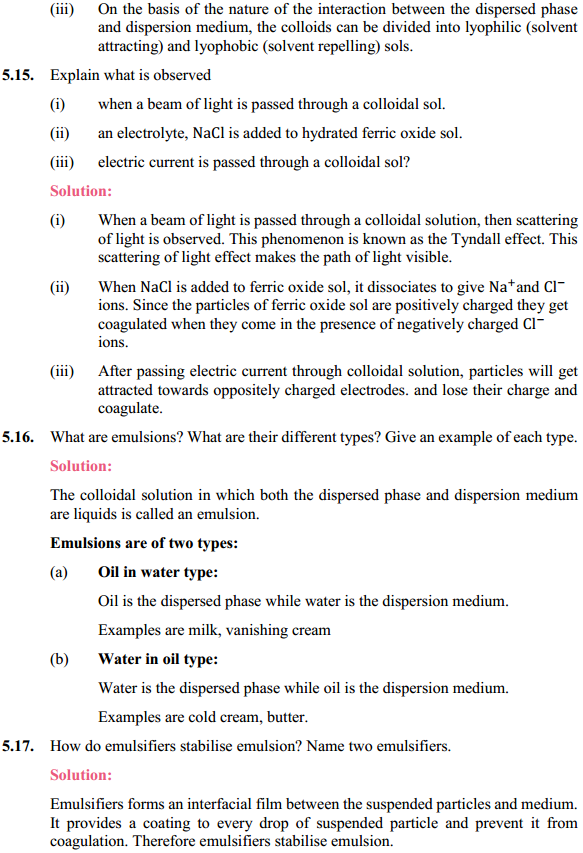 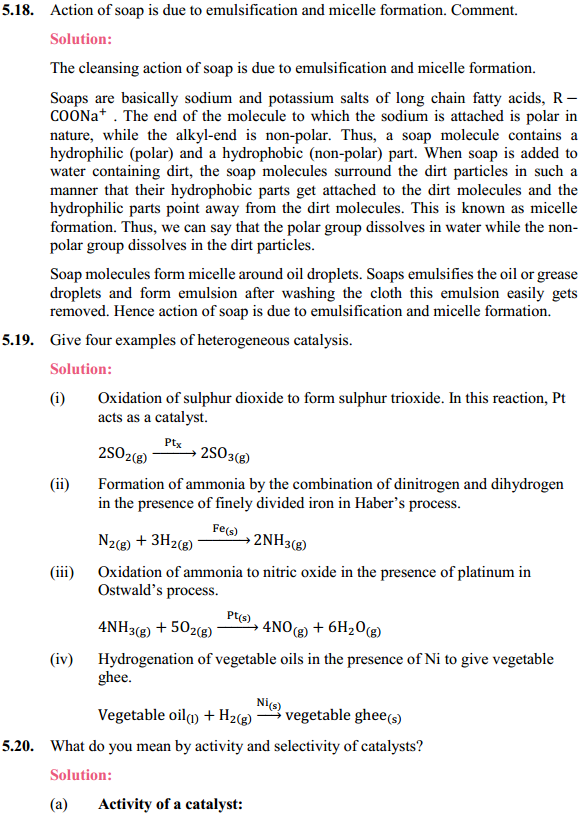 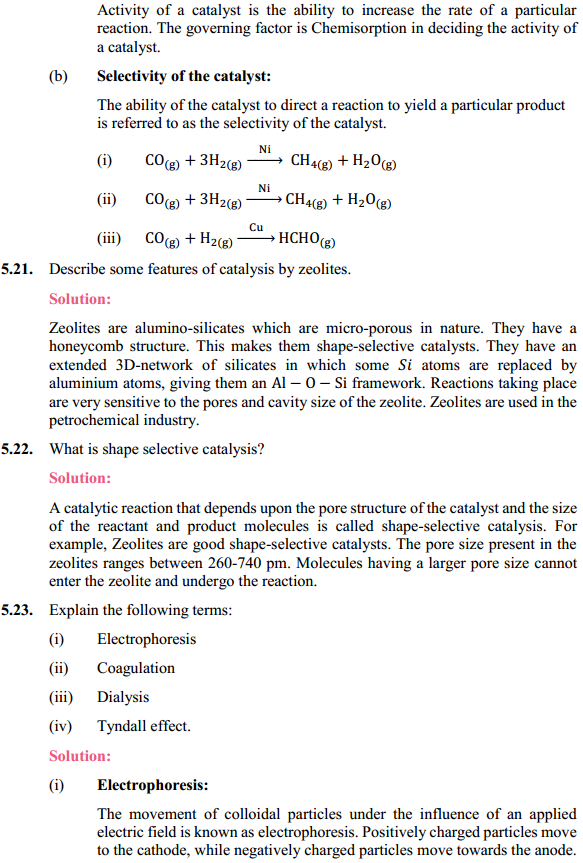 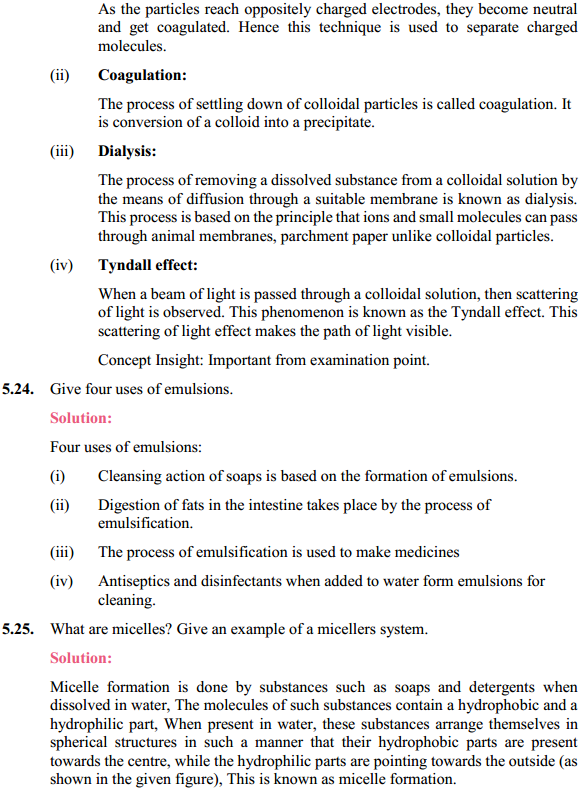 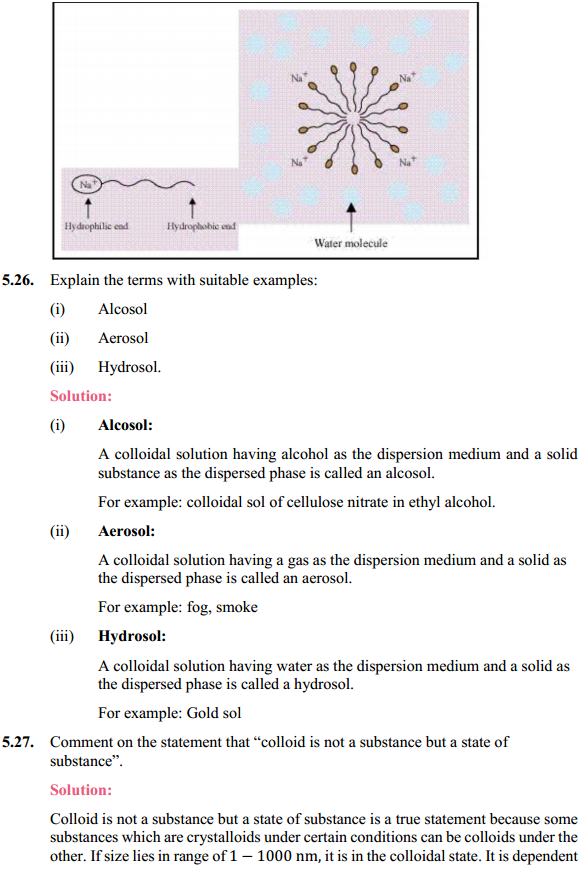