→ Cations and anions are closely packed in an ionic crystal. Each ion in a crystal, whether it is anion or cation, is surrounded by oppositely charged ions. Since electrostatic forces of attraction is present between anion and cation, for stability of the crystal, it is necessary that cation should be in contact with more anions and anion should be in contact with more cations.

→ In figure (A), cation is so small that it does not contact with an anion but anions are in contact of each other. So, the attraction between cation and anions is less but repulsion is high between anions. Due to this reason, figure (A) will have unatable arrangement.

→ Here, attraction force is more then repulsion force but vacancy is present between anions. So, the arrangement of figure (C) is not suitable In this position, trigonal planar arrangement will be converted in to tetrahedral structure according to following figure 1.43. 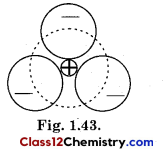 → In this type of arrangement, a cation contacts to four anions and four anions are touching with each other. So, this arrangement is stable. It can be proved from above example that the geometry of crystal also changes by changing radius ratio.