→ Method of Polymerisation : This polymer is first of all prepared in England in 1933. It is a polymer of Ethene. Polythene is formed by addition polymerisation of Ethene monomer units. It is mainly of two types

→ The low density polythene (LDP) obtained through the free radical addition and H-atom abstraction has highly branched structure. Whereas high density polythene is formed by addition polymerisation of Ethene in the presence of a catalyst such as Triethylaluminium and Titanium tetrachiori de (Ziegler- Natta catalyst).

→ Low density polythene is chemically inert and tough but flexible and a poor conductor of electricity. Hence, it is used in the insulation of electricity carrying wires and manufacture of squeeze bottles, toys and flexible pipe.

→ LDPE has melting point of i loo to 125°C. It is not soluble in any solvent at room temperature. But at high temperature, it is soluble in carbon tetrachioride, toluene, xylene etc.

→ The melting point of HDPE is 144° to 150°C. As compared to LDPE. it is more crystalline. The tensile strength, rigidity and resistance to solvents of HDPE is higher than LDPE.

→ Process of Polymerisation : The monomer units are vinyl chloride molecules. PVC is prepared by heating vinyl chloride in an inert solvent in the presence of dibenzoyl peroxide.

→ PVC is dissolved in suitable solvents like chorobenzene and chlorination is done. It is known as chlorinated PVC. Chlorinated PVC is used in making adhesives and fibres.

→ It is used as plasticiser in ester and makes ester soft. It is also used as vinyl leather. This vinyl leather is used in manufacturing of rain-coat, floor polishing, handbags. curtain clothes etc.

→ Above 200°C, PVC degrades and releases HCl. To prevent this, suitable stabilisers are used. 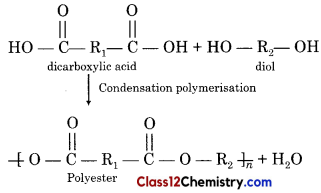 → Condensation Polymerisation of diester and diol. 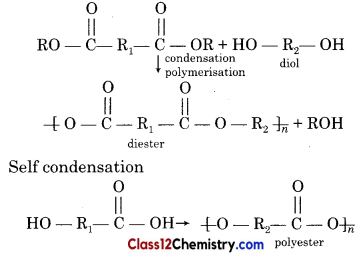 → Uses : The polyester textile fibres made from the polymer are marketed under the trade name Terelene or dacron. It is resistant to the action of most of the common chemicals and biological substances and also to abrasion. It has a low moisture absorbing power.

→ As such it is widely used in making wash and wear fabrics. It is also blended with cotton and wool in clothing. It is also used in seat belts and sails. The polymer is also used in the preparation of films, magnetic recording tapes and for packing food. Dacron (and Teflon) tubes are good substitutes for human blood vessels in heart by pass operation.

→ Terylene or PET (Polyethylene Terphthalate) It is an unsaturJed polyester. It is also known as dacron.

→ Process of Polymerisation : It is a polymer obtained by the condensation reaction between ethylene glycol and terephthalic acid. 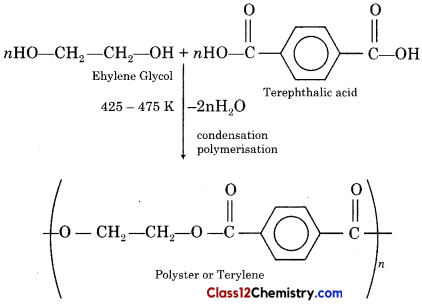 → Uses : These polymers are mainly used in textile industry. This polymer is also used in the preparation of films, magnetic recording tapes and for packing food.

→ It is a polymide. Its polymer chain contains amide group
(—NH—C = O).

→ Process of Polymerisation : Caprolactum has a ring structure. Nylon-6 is formed by anionic addition reactions by caprolactum. Here, monomer contains 6 Carbon atons therefore it is known as Nylon-6. 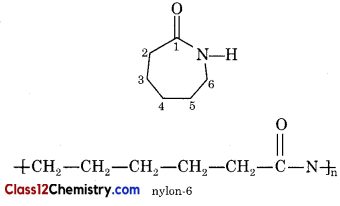 → Uses : Nylon-6 is a synthetic fibres having high tensile strength. It is generally white in colour and is resistant to acids and bases. Mainly, it is used in gears of vehicles. Apart from this, it is also used in toothbrushes, bristles, musical instruments wires such as violin, sitar etc. Also used in making threads, ropes, filaments, nets etc.

It is also polyamide. 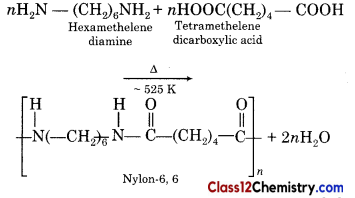 → Uses : Nylon-6, 6 is a polymer of high tensile strength. They are tough and resistant to abrasion. They are also somewhat elastic in nature. These are used both in fibres and plastic form. Nylon finds use in making bristles and brushes, carpets and fabrics in textile industry, elastic hosiery in the form of crinkled nylon.

→ It is a thermosetting resin made of phenol and formaldehyde.

→ Monomers : The reaction of phenol with formaldehyde is done in the presence of either an acid or a base. The reaction starts with the initial formation of o-andlor p-hydroxymethylphenol derivatives, which further react as monomers to form bakelite.

→ Process of Polymerisation : phenol and formaldehyde react in two ways:

→ The condeisation reaction of phenol with formaldehyde in the presence of either an acid or a base catalyst initial product which is a linear product – novolac used in paints. The ratio of phenol and formaldehyde is less than one during the formation of novolac.

→ The ratio of phenol and formaldehyde is taken more than 1 and the product Resol is obtained. 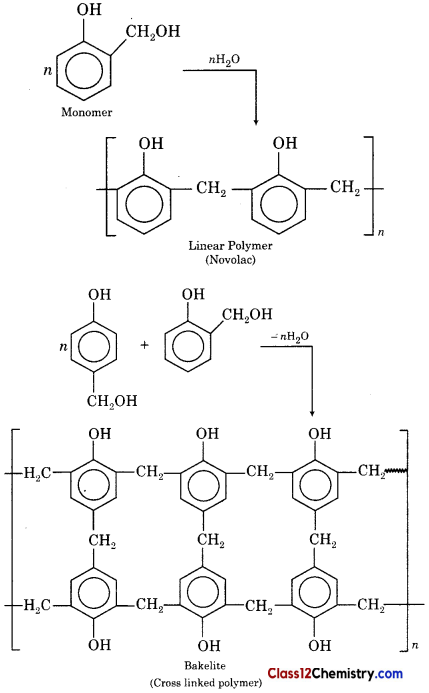 → Uses : It is a linear crystalline polymer. It is not soluble in strong acids and is stable at high temperatures. Also do not react with organic solvents and corrosive alkalies. Therefore, it is used in electric resistance, non-stick cookware s.

→ Uses : it is linear and crystalline polymer. It is insoluble in strong acid (for example HNO3) and thermally stable at very high temperature. it does not react with corrosive alkalies and organic solvents so it is used in making insulators and non-stick cookware and as a lubricant.