Primary, Secondary and Tertiary Alcohols can be distinguished by the following methods :

→ Primary, secondary and tertiary alcohol react with Lucas reagent with different rates and form respective chloride. Since the alkyl halides are insoluble in water, their formation is indicated by the appearance of white turbidity in the reaction mixture.

→ Secondary alcohol does not react immediately with Lucas reagent. It produces turbidity within five minutes.

→ Primary alcohol does not react at room temeperature and does not produces turbidity.

→ The given alcohol is treated with red phosphorus and iodine resulting in the formation of corresponding alkyl iodide. 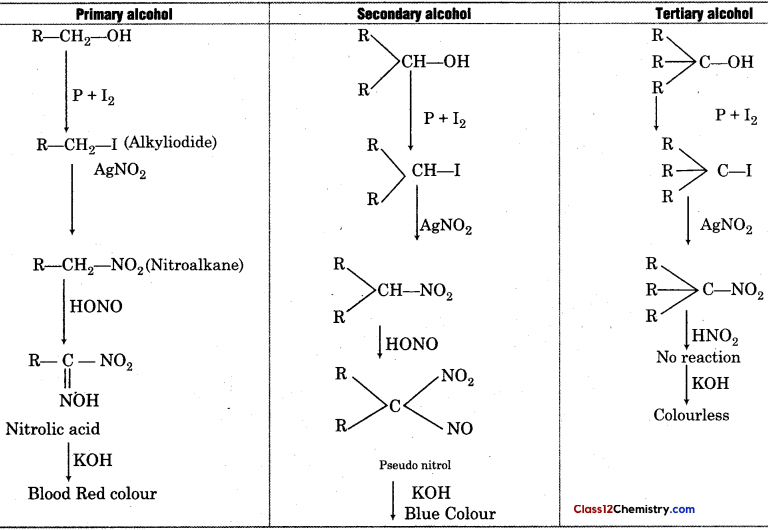 → Esteritlcation : Esterification reaction is used to distinguish between primary, secondary and tertiary alcohols.

→ In this reaction alcohol reacts with carboxylic acid in the presence of acid catalyst to form ester.

Order of ease of various alcohols towards esterification is as follows:

→ Oxidation Method : Primary, secondary and tertiary alcohol react with oxidising agents and form different products. hence, this method is used to ditinguish between them. Description of this method is given in chemical properties of alkanl.

→ Dehydrogenation : When vapours of alcohols are passed on red hot copper at 573 K primary and secondary alcohol get dehydrogenated to form aldehyde and ketone respectively whereas tertiary alcohol form alkene in these conditions. Description of chemical equation of the reaction is given in chemical properties of alkanol.