→ The elements of group – 15 form two types of halide i.e, EX3 and EX3 But nitrogen cannot form penta halides due to the absence of vacant d-orbitals in its outer most shell.

→ Trihalides : In trihalides, element directly combines with halogen. Except NCl3 NBr3 and NI3, all other trihalides are stable. These three halides are not stable due to large difference in atomic size of nitrogen and halogens (CI, Br, I). 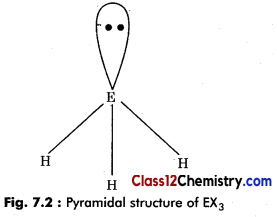 → Some other important points related to trihalides are as follows

→ All the tribalides of nitrogen except NF3 (which is inert and stable) are unstable and decomposed with explosion. The unstablity of NCl3, NBr3, NI3 is due to the low polarity of N-X bond and large difference in atomic size of nitrogen and halogen.

→ Basic character of trihalides decreases down the group due to increase in size of central atom and decrease in availability of lone pair of electrons.
NE3 > PF3 > AsF3 > SbF3 > BiF3
(Lewis basic strength)

→ Pentahalides have trigonal bipyramidal structure in gaseous as well as in liquid state. In pentahalides the central atom is sp3 d-hybridised. 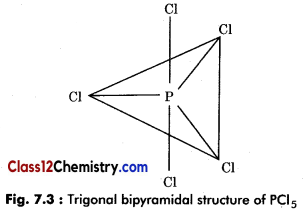 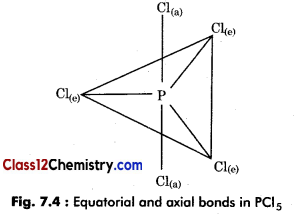 → X-ray studies reveals that the solid PCl5 is an ionic compound. It exist as [PCl 4]+ [PCl6]–, PBr5 and PI5 also exist in ionic form in crystalline form.

→ Penta halides behaves as Lewis acids because of vacant d-orbitals.