→ All the elements of this group form trihydrides having formula MH3 where, M = N, P, As, Sb, Bi
These hydrides are as follows

All the important properties of hydrides of group -15 are summarised in table 7.4. 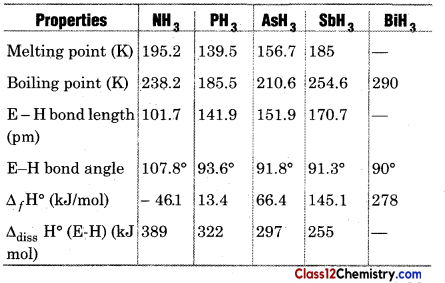 → From the table it is clear that hydrides show variable change in their properties. The discussion of the properties of hydrides of group 15 is as follow:

→ Basic Character : Hydrides of nitrogen family are Lewis base due to the presence of lone pair of electron on the central atom. The basic strength of these hydrides decreases down the group

→ Hydrogen Bond: Nitrogen due to small size and high electronegativity forms hydrogen bonds. But the other elements of this group cannot form hydrogen bonds.

→ Bond Angle : Hydrides of group – 15 elements have pyramidal structure and sp hybridisation on the central atom. But due to presence of lone pair of electron the bond angle decreases. It has been found to be less then 109°28’.

On moving down the group, the bond angle further decreases as

→ As we know that in hydrides the central atom is sp -hybridised and it is surrounded by four electron pairs i.e, three hond pair and one lone pair. Due to bond pair-lone pair repulsion, bond angle decreases. Further on, moving down the group the size of atom increases and electronegativity decreases.