→ When equal amounts of dextro rotatory and laevo rotatory isomers are present, the resulting mixture becomes optically inactîve because the optical activities of each isomer cancel each other. Such a mixture is called a racemic or dl mixture or racemic modification.

→ Racemic mixtures can be symbolized by a — or (±) prefix in front of the substance’s name. Since eriantiomers have equal and opposite specific rotations, a racemic mixture exhibits no optical activity. 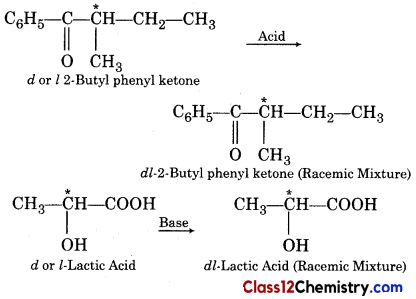 → The process by which a racemic mixture is formed from chiral materials is called racemisation. Thus, above reactions are racemisation reactions.

→ Such reactions which occur by unimolecular nucleophilic substitution always form racemic mixture. In these reactions, a highly reactive carbocation is formed on which nucleophile can attack by both sides in the next fast step. Thus, mixture of 50% d and 50% ¡ isomer is formed. Example, 2-Chloropropanoic acid on alkaline hydrolysis gives dl racemic mixture. The reaction can be represented as follows:

Racemisation can be affected by following reasons: