Purification or Refining of the Metal :

→ The metals obtained from reduction is not pure so theseare known as crude metals. In order to get pure metal, we have to purify or refine them because there are various impurities, which are present in crude metal. These impurities are of:

The detailed study of these processes are as follow :

→ Distillation. This method is used to purify those metals which are easily volatile i.e., have low boiling point. During this process, the impure metal is heated in a retort or furnace then the metal having low boiling points are vaporised and condensed in a receiver while the non volatile impurities are left behind in the retort. This method is used to refine zinc (Zn), cadmium (Cd), mercury (Hg) etc.

→ Liquification : This process is applicable on those metals which have low melting point such as tin (Sn). lead (Pb), mercury (Hg), bismuth (Bi) etc. In this method crude or inpure metal is placed on the sloping hearth of a furnace where it is heated gently in an inert atmosphere of CO2. On heating metal melts and flows down leaving behind the non fusible impurities. These non-fusible impurities are known as dross. The pure metal is collected at the bottom of the hearth in a receiver. 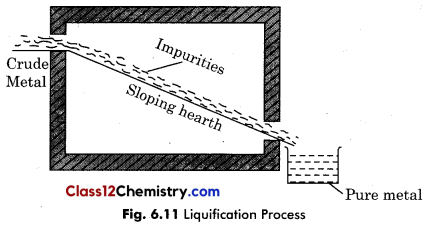 → Poling: When the impurities present in the crude metals like oxides then this method is used. In this method, the molten impure metal is strongly stirred with the help of green poles of wood. This green poles of wood release hydrocarbon gases which can reduce the impurities of oxides easity. Sometimes impurities present in molten crude metal vaporised in the form of oxides or reacted with silica and form slag which can be skimmed later on. The metal obtained from this method is 99% pure. It is used to purify copper.

→ Electrolystic refining or electrorefining : This method is based on electrolysis. This method is used to refine copper (Cu), silver (Ag), gold (Au), lead (Pb), aluminium (Al), platinum (Pt). In this method, crude metal is made anode whereas the thin sheet of pure metal is made cathode. Both cathode and anode are placed in a suitable electrolyte which is the solution of soluble salt of the same metal.

→ On passing electricity the metal from anode goes into the solutions as ions because at anode oxidation occurs while pure metal gets deposited at the cathode because at cathod ereduction of metal ion occurs. The less electropositive impurities fall down below the anode in the form of anode mud. The reactions involved during electrolytic refining are as follow :

→ The impurities present with copper metal is settle down below anode in the form of anode mud. The anode mud has the impurities of antimony, selenium, tellurium, silver, gold, platinum etc. The metal obtained by this method is 99.98% pure.

→ Zone Refining : Elements like silicon (Si). Germanium (Ge), Gallium (Ga) etc. which are used as semiconductors can be refined by this method. It is used when the metals are required in high degree of purity. This method is based on the principle that the impurities are more soluble in the molten form than in solid state of the metal. In this method, an impure metal rod is taken as a circular movable heater of high frequency is fitted at one end of a rod. The heater is slowly moved across the rod.

→ The metal melts at melting point during heating. As the heater moves on from one end to other end of rod the pure metal crystallises while the impurities goes on in the adjacent molten zone. The process is repeated several times. The end of the rod where the impurities have collected, is cut off. 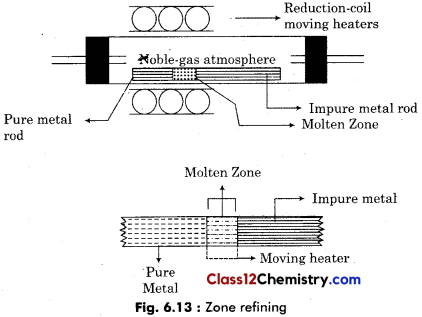 → Vapour phase refining : This method is based on the principle that the metal can be converted into their volatile compounds by reacting with suitable reagent while the impurities remain uneffected during the reaction. Now this volatile compound can be decomposed easily on heating into metal. Thus for this type of refining, following two requirements should be fullfilled by the metal :

Metal can form a volatile compound with appropriate reagent.

→ The volatile compound should be easily decompose so that pure metal can be recovered. The following examples illustrate this method.

The carbon monoxide can be used again.

→ Van-Arkel Method : This method is applied for getting very pure metal. In this method, first of all metal is converted into a volatile compound, while impurities remain uneffected. The compound thus obtained is decomposed to get the pure metal. For the decomposition of gaseous compound, a white hot tungsten filament is used. This method is used to refine metals like. Titanium and Zirconium. The reactions involved are as follow : 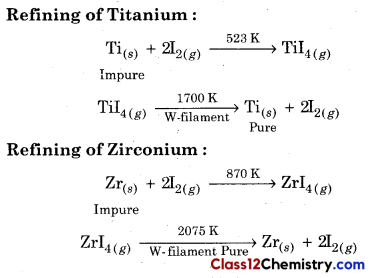 → Chromatography : Those elements or substances which are found in very less quantity in nature, chromatographic method is used in the identification, purification and separation of components (element or compound) from their mixture. It is a adsorption technique and it is based on distribution of mixture between two phases. In this method there is a mobile phase and a stationary phase.

→ Description of Method : In this method, cylindrical column of glass (Burette can also be taken) is taken. At the bottom of column, there is a tap. Paste of adsorbent with suitable liquid is made and then column is filled with it. Adsorbent should be completely insoluble in liquid and it should not react with the components of the sample mixture. Generally alumina, silica gel, calcium carbonate, starch, cellulose etc. are used in the form of adsorbent. Mixture whose components are to separated is dissolved in a suitable solvent and poured slowly into the column. Different components on the basis of their different adsorption power are adsorbed at different levels of the column. 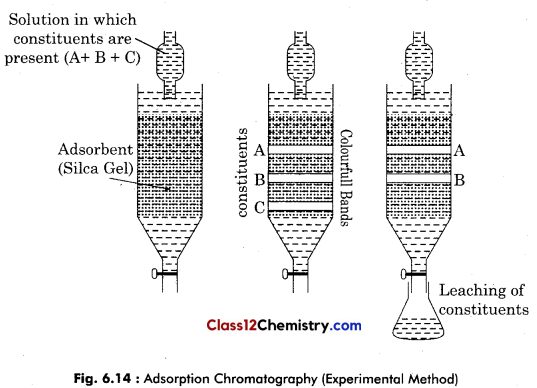 → These bands are identified by different colours or ultraviolet light. These bands are taken out of the column and are separated by cutting. Band representing such component is dissolved in a suitable solvent and then extraction is done. On concentrating and crystallising of the solution, pure substance (component) is obtained.