The important properties of colloidal solutions are given below:

Physical Properties : These are of following types:

→ Stability : Colloidal solutions are quite stable because their particles do not settle down under the influence of gravitational force as they are very minute and show constant motion. However, they can be settled down by centrifiguration. Lyophilic colloids are more stable than lyophobic colloids.

→ Shape and Colour: The colour of colloidal solution depends on the size, shape of colloidal particle as well as on the wavelength of light falling on the particles of colloids.

→ Sedimentation: The particles of sol are centrifuged by rotating them rapidly in centrifuge machine. This process is called sedimentation. The molecular masses of macromolecules are determined by this method.

→ Hence, the values of colligative properties (i.e., lowering in vapour pressure, elevation in boiling point, depression in freezing point, osmotic pressure) are of small order as compared to values shown by true solutions at same concentrations.

→ Tyndall Effect: This effect was first observed by Faraday and later detail study was done by Tyndall When a beam of light enters a dark room it lights up the dust particles floating in the air. Similarly when a beam of light is passed through a colloidal solution, the path of the beam is illuminated and becomes visible as a blue bright streak when seen in a direction perpendicular to the incident beam. 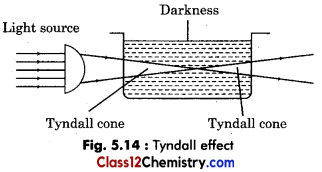 The important conditions for the tyndall effect are as follow :

→ There should be large difference in the refractive indices of dispersed phase and dispersion medium. The greater thes difference, the brightness of the blue colour of Tyndall cone will be high. 2. The diameter of the sol particles should not be smaller than the wavelength of the light used to see the colloidal solution. The strength of Tyndall effect depends upon the extent of scattering of light. The scattering of light depends upon the following factors:

→ Diameter of particles and wavelength : The diameter of the particles of dispersed phase should not very less than the wave length of light used. Tyndall effect is used to distinguish collodial solution and true solution. Zsigmondy used tyndall effect to prepare ultramicroscope. Other examples of Tyndall effect are blue colour of sky. blue colour of the ocean, the redness of the sun at sunset, the visibility for the head light of a vehicle in the presence of smoke of ahead going vehicles etc.

→ Brownian Movement: When colloidal solution is observed with the help of ultramicroscope then colloidal particles are seen as bright spots of light in dark back ground in a state of rapid, random, zig-zag motion. This motion was first observed by Robert Brown. Hence, it is known as Brownian movement. This Brownian movement is responsible for the stability of colloidal solution because the movement has a string effect which does not permit the particles to settle. 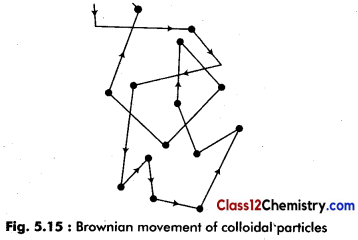 Causes of Origin of Charges : The cause of charge on colloidal particle is due to the following reasons:

→ Fe3+ ions are present in colloidal solution of Fe(OH)3 formed by hydrolysis of FeCl3. So, colloidal particles of ferric hydroxide are positively charged by adsorbing Fe3+ ions.

→ The colloid of Agl is formed by adding aqueous KI solution in excess of silver nitrate, which forms positive colloid by adsorbing Ag+ ions from dispersion medium. But if the excess of KI adds in AgNO3 solution then AgI colloid is negatively charged, because AgI adsorbs I– ion of KI electrolyte.

Arsenic sulphide colloid is obtained by passing H2S gas in solution of arsenic oxide which is negatively charged by adsorbing S2- ions.

Al(OH)3 colloid is positively charged because this electrolyte adsorbs Al3+ ions of AlCl3:

Hence the nature of charge on colloidal particles depend upon the nature of adsorbed common ions. In above given examples, we can understand it easily. 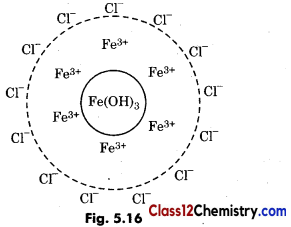 Distribution of Charge in Colloidal State : Electrical Double Layer Theory: Helmholtz initiated this theory which was later modified by Guoy and stern.

According to this theory :

There is a electrical double layered structure in every colloidal state. 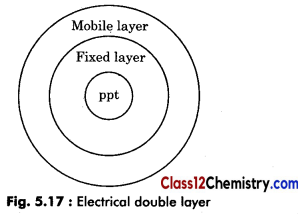 Here one layer is due to the adsorption of positive or negative ions on the colloidal particles. This layer is known as fixed layer.

→ Since separation of charge creates potential, the charges of opposite signs on the fixed and diffused parts of the double layer results in potential difference between the fixed layer and the diffused layer of opposite charges is called the electrokinetic potential or zeta potential.

→ Electrophoresis : As we know that collodial particles are electrically charged and carry same type of charge either positive or negative. The dispersion medium has an equal but opposite charge to make the system neutral.

→ Due to similar nature of charge on the collodial particles then they repel each other and do not allow to combine to form bigger particles so the collodial solution is stable. The existence of the electric charge can be proved by the phenomenon of electrophoresis.

→ “When electric field is applied on colloidal solution then colloidal particles show movement either towards cathode or anode. This movement of particles towards oppositvely charged electrode is known as electrophoresis.” 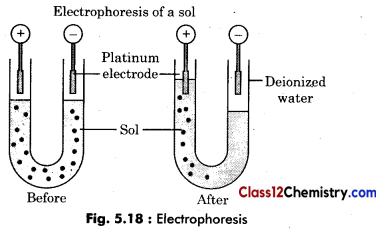 → “The transformation of colloidal solution into a suspension with the help of an electrolyte is called coagulation or flocculation or precipitation.”

The coagulation can be done by following methods:

For example : In the colloidal solution of As2S3, if BaCl2 is added then negatively charged sol particles are neutralized by Ba2+ ions

Coagulation values of few electrolytes are given below in table 5.7: 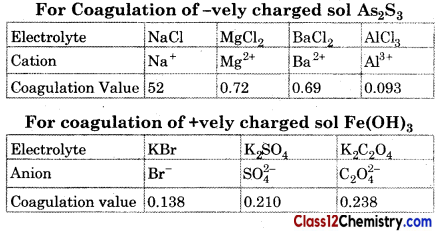 → So, the layer of the dispersion medium is first removed by adding any suitable dehydrating agent in the hydrophilic sols and then electrolyte is added which can neutralize the charge on colloidal particles. In this way lyophilic sols are coagulated.

→ For example : In a hydrophilic sol, first alcohol or acetone is added which causes dehydration of dispersion medium. Now small quantity of electrolyte is added for complete coagulation.

→ Protection of Colloids : Lyophilic sols are more stable than lyophobic sols. It is due to the fact that lyophilic colloids are highly solvated i.e., colloidal particles are covered by a layer of the liquid in which they are dispersed Lyophilie colloids have a unique property to protect lyophobic colloida.

→ “The number of milligrams of a hydrophilic colloid which just prevent the precipitation of 10 mL of gold sol on the addition of 1 mL of ten percent sodium chloride solution is known as Gold number.”

→ The gold number values of few protective colloids are given in table 5.8.

Some protective colloids and their gold number

→ Electro-Osmosis : When colloidal solution is placed under the influence of electric field and anyhow the movement of colloidal particles is stopped by using a membrane. Then particles of dispersion medium move towards oppsitely charged electrode.