Polymers of Rubber Preparation and Properties

It is of two types : Natural rubber and Synthetic rubber.

→ Natural Rubber: Ruboer is a natural polymer and possesses elastic properties. It is also termed as elastomer and has a variety of used. It is manufactured from rubber latex which is a colloidal dispersion of rubber in water. This latex is obtained from the bark of rubber tree (Hevea brasiliensis), Gatla Percha and is found in India, Srilanka, Indonesia, Malaysia and South America.

→ Method to Obtain Natural Rubber : To obtain natural rubber, first of all latex of rubber plant is obtained. The latex contains about 25.40% of rubber hydrocarbons dispersed in water along with stabilizer proteins and some fatty acids. Then acetic acid is mixed due to which rubber coagulates and precipitates out. It is separated by filtration.

This rubber is known as Crepe rubber. It is not so useful because of following reasons :

Structure and Composition : Natural Rubber may be considered as a linear polymer of isoprene 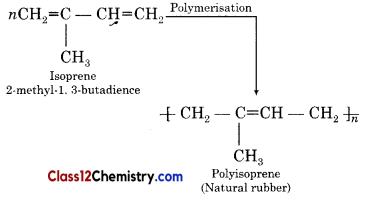 → Two isomers cisand trans are obtained by combination of 1, 4 isoprenc units. Natural rubber is cis isomer. In these, monomer units are joined by weak van der Wall’s forces and form spring like structure. Due to this structure, rubber shows the property of elasticity. They can be stretched like springs.

→ The natural obtained from rubber tree, Gutta Percha is found in trans form.

→ Vulcanisation of Rubber : The wide applications of rubber are due to its property called elasticity and that is why rubber is said to be an elastoplastic or elastomer. Accidentally, in 1893. Charles Goodyears discovered that addition of Sulphur to hot rubber cause changes that improve its physical properties in a spectacular manner. This process is called Vulcanisation. At the time, Thomas Hancock, performed vulcanisation and in 1843 takes patent of it.

→ Although natural rubber is thermoplastic substance in which there is no crosslink between the polymer chain and it on vulcanization, set into a given shape which is retained. 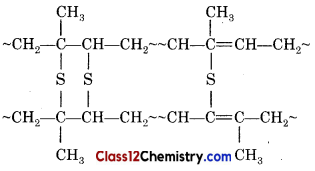 → The vulcanization process performed originally was slow. Now a days, same additives such as zinc oxide etc. are used to accelerate the rate of vulcanization. During vulcanization sulphuï crosslinks are formed the double bonds in the rubber molecule acts as reactive sites. The allylic —CH2, alpha to double bond is also very reactive.

→ During vulcanization, sulphur forms crosslinks at these reactive sites. As a result rpbber gets stiffened and inter molecular movement of fubber springs is prevented resulting in physical character of rubber. The extent of stiffness of vulcanization rubber depends upon the amount of sulphur is used for making batter case rubber.

→ In a polymer. the chains are normally tanged up with each other. When the rubber is stretched, the chains straighten out to some extent. The chains can not slip past each other because of the polysuiphide bridges.

→ Thus, rubber can be stretched only to a limited extent. When the tension is removed, the chains try to coil up again and the rubber resumes its original shape. 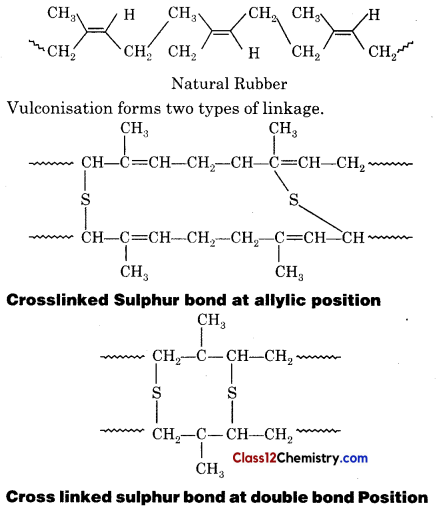 → It also contain carbon-carbon double bonds. Synthetic rubber are vulcanisable rubber like polymer, which is capable of getting stretched to twice its length. However, it returns to its original sha1e and size as soon as the external stretching force is released.

→ Styrene Butadiene Rubber or SBR or Buna-S : It is obtained by polymerisation of 1,3-butadiene and styrene in presence of Sodium metal

→ In Buna-S, Bu stands for butadiene, Na for sodium and S stands for styrene. It is also called S.B.R. (Styrene Butadiene Rubber). It has slightly less tensile strength than natural rubber. Buna-S is used for making automobile tyres and rubber soles, belts and hoses etc.

Polyisobutylene or PIB : It is obtained by polymerisation of isobutylene.

→ Uses : It is the only polymer which can be kept in air for long time i.e., it is impermeable to air. Therefore, these are used in making inner line for tyres and basketball.

→ Apart from this, it is also used as adhesive.

Note : Balloons made of simple rubber (polyisoprene) contracts after sometime because they are permeable to air.

→ Polybutadiene : It is obtained by polymerisation of butadiene monomer units.

→ Uses : It is a synthetic rubber and shows similarity with natural rubber. When rubber is required to use at low temperatures, this rubber is used. It is used in preparing gaskets and other parts of vehicaler.

→ Polychioroprene or Neoprene Rubber : Neoprene or Polychloroprene is formed by the free radical polymerisation of chioroprene.

→ It has superior resistance to vegetable and mineral oils. It is used for manufacturing conveyor belts, gaskets and hoses.

→ Buna-N or Nitrile Rubber: Buna-N is obtained by the copolymerisation of 1, 3-butadiene and acrylonitrile in the presence of a peroxide catalyst.

→ It is resistant to the action of petrol, lubricating oil and organic solvents. It is used in making oil seals, tank lining etc.