→ PhysIcal State and Odour : Aliphatic amines are gases which smell like fish. Primary amines with three or more carbon atoms are liquid amines and all higher members are solids. Aniline and other arylamines are usually colourless but get coloured on storage due to atmospheric oxidation. These are easily absorbed by skin and aryl amine are toxic.

→ Solubility : Lower aliphatic amines are soluble in water because they can form hydrogen bonds with water molecules. However, solubility decreases with increase in molar mass of amines due to increase in size of the hydrophobic alkyl part.

→ Tertiary amines do not have intermolecular association because of the absence of hydrogen atom for hydrogen bond formation. Therefore, the order of boiling points of isomeric amine is as follows:

The intermolecular hydrogen bonding in primary amine is shown as follows: 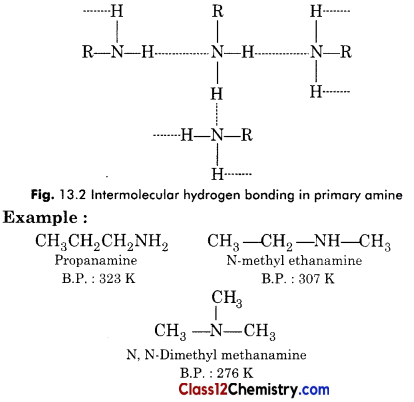