Physical Properties of Aldehydes and ketones Preparation and Properties

Tabl 12.3 Boiling Points of Some Compounds

→ In carbonyl compounds the boiling point of ketone is higher as compare to aldehyde this is because of the presence of two alkyl group. It increases dipole moment therefore boiling point also increases.

→ Solubility : The lower members of aldehydes and ketones such as methanal, ethanal and propanone are miscible with water in all proportions, because they form hydrogen bonds with water molecules. However, the solubility decreases with increase in length of alkyl chain, due to hydrophobic nature of alkyl group 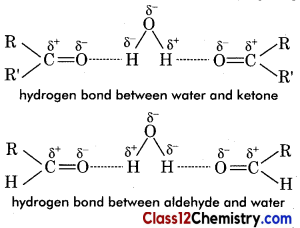 → All aldehyde and ketones are also soluble in organic solvents like benzene, ether, methanol, chloroform etc.

→ Smell : Lower aldehyde have strong unpleasent smell. As the size of the molecules increases, the odour becomes less pungent and more fragrant. ¡n fact many naturally occuring aldehydes and ketones have been used in blending of perfumes and flavouring agents.

These are used in various eatable product and medicines for pleasent smell.