Main physical properties of group -15 are listed in taMe 7.1

Table 7.1 : Some atomic and physical properties of group-15 elements 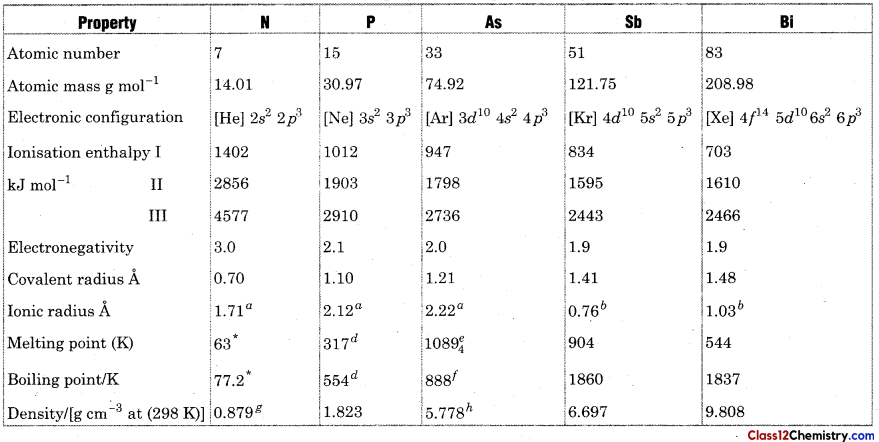 The electronic confturation of the elements of this family is given in table 7.2

→ Physical State : In this family, nitrogen, the first member is a gas at room temperature. Phosphorus, the nextelement is a waxy solid whih the rest elements are solid and have metallic lustre.

→ AtomIc and Ionic redii: On moving down the group, the atomic radii increases with increase in atomic number, It is because of addition of a new shell in each succeeding element.
N < P < As < Sb < Bi (Atomic radii)

→ Ionisation Energy : On moving down the group, the first ionisation enthsilpy decnases regularly. It is because of increase in the sire of atoms and screening effect of the intervening electrons.
N > P > As > Sb > Bi (Ionisation Enthiilpy)

→ It is because of highly stable half filled electronic configuration (np3) of p-orbitais of the elements of group-15. Due to stable half filled configuration, the value electrons of groups elements are strongly attracted by the nucleus and hence they have very valence electrons of group 15 elements are strongly attracted by the pucleus and hence they have very less tendency to lose electrons. As a result, the ionisation energy of the elements of nitrogen family increases.

→ Metallic Character: Metallic nature increases down the group. In group N and P are purely non-metal, As and Sb are metalloids or semimetals and Bi is a metal.

→ On moving down the group metallic character increases because atomic size increases and ionisation energy decrease due to which the electrons can be removed easily. Hence, electropositive character also increases.

→ Melting and Boiling Points : The melting points of the elements of group -15 first increases from Nitrogen (N) to Arsenic (As) and then decreases from Antimony (Sb) to Bismuth (Bi).

However the boiling points increase regularly from N to Bi.

→ However, the regular increase in boiling points of elements of group-15 from N to Bi is because of their atomic size. N < P < As < Sb < Bi (Boiling points)

Density : It increases gradually on going down the group

Allotropy All the elements except bismuth show allotropy. For example: 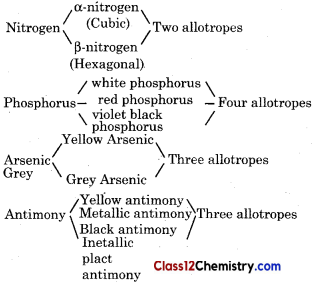 → Negative Oxidation States All the elements of group – 15 have 5 electrons in its valence shell with configuration of ns2np3. Therefore, these elements require three more electrons to acquire the nearest noble gas configuration. Although gain of three electrons form M3- ions require large amount of energy yet it takes place only with Nitrogen (N). It is because of its smallest size and highest electronegativity among the group. Thus, nitrogen form N3-ion (nitride ion) and show-3 oxidation state.

→ But the tendency of these elements to show – 3oxidation state decreases as we move down the group from N to Bi. It is due to decrease in their electronegativity and ionisation energy

→ Positive Oxidation States In addition to – 3 oxidation state, the elements of this group also exhibit + 3 and + 5 oxidation states. However, they cannot form Motions due to the requirement of tremendous amount of energy On moving down the group, the stability of +5 oxidation state decreases while that of +3 oxidation state increases due to inert pair effect.

Due to inert pair effect, + 5 oxidation state of Bismuth (Bi) is less stable than + 3 state. Nitrogen cannot form compounds having + 5 oxidation state such as NF5 NCl5 etc. Because it does not have vacant d-orbitals in its valence shell so it can not extend its octet.

However, Nitrogen can exist in various oxidation states from-3 to +5 in its hydrides, oxides etc. It has been shown below

Table 7.3: Compounds of nitrogen and their oxidation states

→ Disproportionation : It is a type of redox reaction in which the same compound is simultaneously reduced and oxidised. It is observed that the compounds of nitrogen and phosphorus in + 1 to + 4 oxidation states tends to disproportionate in acid solution.

But + 3 oxidation state in compounds of As, Sb and Bi is quite stable. They do not disproportionate.:

→ Maximum Covalency The maximum covalency of nitrogen is four because it does not have vacant d-orbitals in its outermost shell. Due to the absence of empty d-orbitals nitrogen cannot form penta halides like NF5, NCl5 etc.