Sulphur dioxide can be prepared by the following methods

→ From sulphur: When sulphur is burned in presence of air or oxygen then wulphur dioxide is formed. With SO2 small amount approximate 6 to 8% of SO3 is also formed.

Laboratory Method : In laboratory, SO2 can be prepared when sodium sulphite reacts with dil HCl.

Industrial Preparation : Industrially SO2 can be prepared by roasting of sulphide ores such as iron pyrites organe blende.

→ By the reaction of HCl with sodium sulphite or sodium hydrosulphide : On reacton between HCl and Na2 SO3 or NaHSO3 SO2 is formed.

→ By heating gypsum with carbon: When gypsum is heated with carbon at about 1000°C then sulphur dioxide is formed.

→ Acidic Nature : It forms sulphurous acid when dow in water

Thermal decomposition : On beating strongly at 1473 K temeperature it decomposed into SO3 and S.

On electric disintegeration it decomposes into SO3 and S.

On electric disintegration it decompone into SO and O2

Reaction with oxygen : SO2 eacts with oxygen when it is heated in presence of V2O5 or platinum asbestos catalysis, then So is formed.

Renction with Chlorine : SO2 reacts with chlorine in presence of charcoal forming sulphuryl chloride SO2Cl2) 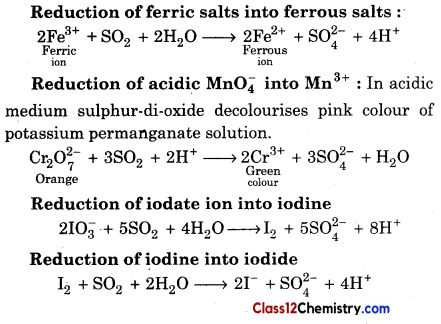 → Reduction of halogen: It can reduce halogens into halogen acids or halide ions. As it can destroy the properties of chlorine so sulphur di-oxide is also known as anti-chlor

Oxidising Properties : It behaves as mild oxidising agent. Some oxidising properties are given below:

It oxidises iron into iron oxide and iron suiphide.

It can oxidises H2S into S.

It can oxidises carbon mono oxide into carbon-di-oxide.

It can oxidise stannous and mercurous salts into stannic and mercuric salts in presence of HCl.

→ Bleaching action Moist sulphur dioxide acts as mild bleaching agent. It bleaches naturally coloured subtances like flowers, vegntables, leaves etc. But its bleaching action is temporary as it is due to the reduction of substances. When bleached articles or substances are exposed to air, they remains its colour due to oxidation.

Reaction with hydrogen: SO2 oxidine hydrogen into water at 1000°C temperature.

in SO2 sulphur atom is sp2 hybridised. In it S-O-S bond ingle is 109,5°. Its shape is planar triangular. It has consting structures which are shown below

SO2 can be detected by the following tests :

→ From sulphur dioxide : SO2 is oxidised inpresence of V2O5 or finely divided platinum at 2 atm pressure and 700 K temperature into SO3.

Uses of Sulphur Tri Oxide (SO3)