→ In other words, hydroxyl derivatives of hydrocarbons (aliphatic or aromatic) are known as alcohols and phenols.

→ Ethers are also organic compounds of oxygen containing functional group. These are also known as functional isomers of monohýdric alcohols.

→ The substitution of hydrogen atom in a hydrocarbon by an alkoxy (RO) or aryloxy group (ArO) gives ethers.

Hydroxy derivatives of alkanes are known as alcohols. These compounds are obtained by replacing one or more hydrogen atoms from alkane molecule by hydroxyl group (—OH).

Phenols are hydroxyl derivatives of aroffiatic hydrocarbons in which hydroxyl group is directly attached to benzene ring. They are also known as carbolic acids. It was first isolated in the early nineteenth century from coaltar.

→ Those organic compounds in which both the valency of bivalent oxygen atom are satisfied by alkyl groups are called ethers or alkoxy alkane. Aryl groups can also be present in place of alkyl groups. 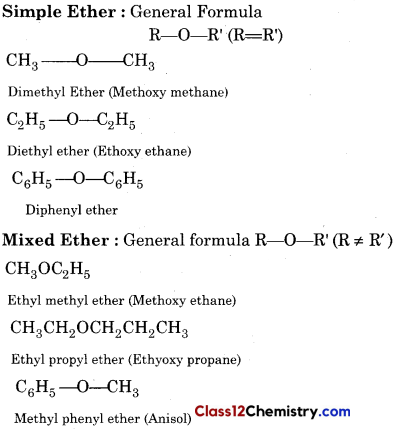 → Ether can be considered as derivative of water if in place of two hydrogen atoms alkyl groups are placed. Ethers are also called anhydrides of alcohol. On elmination of one molecule of water from two molecules of alcohol, ether is obtained.

→ Their general formula is CnH2n+2O.

→ Where value of n is always greater than one.

Akohols can be prepared by the following methods:

Chemical reactions ofalcohols can be divided into four parts:

→ Aromatic hydroxy compounds in which hydroxy group is directly attached to benzene ring are known as phenols.

→ Phenol is colourless liquid with characteristic smell. When it come in contact with air it geta oxidised and form para.benzoquinone due to which it changes to pink colour, it is sparingly soluble in water.

Chemical reactions of phenol are divided into three classes :

→ Ether are colourless liquids with pleasant smell. They are less soluble in water.

→ Estrification : Thc’ reaction of alcohol and carboxylic acid in the presence of conc. H2SO4 to form esters.