→ The kinetic energy of all molecules of reactant species is not same. It is difficult to imagniate purity of behaviour of a molecule. So, Ludwig Boltzmann and James Clark Maxwell used statistics for explaining behaviour of larger number of molecules. 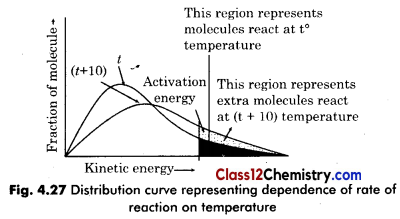 → When temperature increases then the peak of curve displaces towards higher energy and curve expands towards right because the ratio of molecules having higher energy increases. The area corresponds to curve is same because the value of probability should be same at all time. 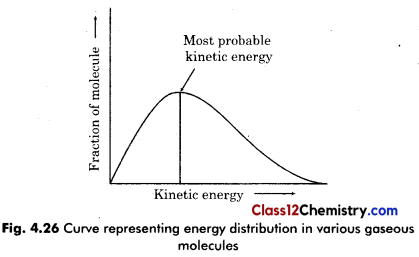 → The number of colliding molecules having energy more than activation energy increases with increase in temperature of a substance. As figure (4.27) shows that the area showing molecules having activation energy or more than this energy at (t + 10) temperature in curve becomes twice. So, the rate of reaction also becomes twice.