→ By ammonolysis (Hoffmann’s Method) : When conc. ammonia and alkyl halide is heated at 373 K in a sealed tube, then a mixture of primary, secondary, tertiary amines and quaternary ammonium salt are obtained.

→ Carbon-halogen bond in alkyl and benzyl halides easily break by nucleophiles. Therefore this reaction is an example of nucleophilic substitution reaction (SN) which ammonia or amine molecule acts as a nucleophile due to the presence of lone pair on the nitrogen atom.

The order of reactivity of halides with amines is as follows :

→ Ammonolysis has the disadvantages of yielding a mixture of primary, secondary, tertiary amines and quaternary ammonium salt. It is not convenient to separate the mixture in the laboratory.

→ However, primary amine is obtained as a major product by taking large quantity of ammonia and less quantity of alkyl halide.

By reduction of Cyanide and Isocyanide :

→ Primary amine can be prepared from reduction of alkyl or aryl cyanide in the presence of reducing agent like H2 (Raney Ni), LiAlH4 or Na/C2H5OH

→ The reaction when takes place in the presence of alcohol and sodium, then the reaction is called Mendius reduction.

→ If reaction is done with isocyanide, secondary amine is formed.

→ By reduction : Amides are reduced to the corresponding amines containing same number of carbon atoms by LiAlH4 or Na/C2H5OH. 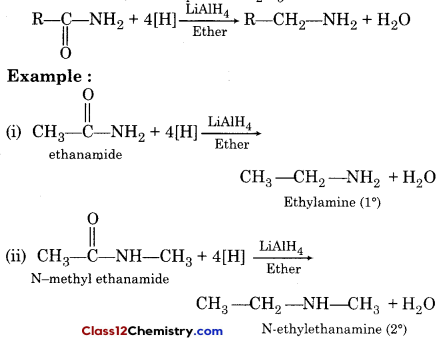 → By Hottmann’s Bromamide Reaction : Hoffmann developed a method for preparation of primary amines in which amides are treated with Bi and aqueous or ethanolic solution of NaOH. This reaction involves the migration of alkyl or aryl group from carbonyl carbon ofamide to the carbonyl atom of amine. The amine formed in such reaction contains one carbon atom less than the amide. 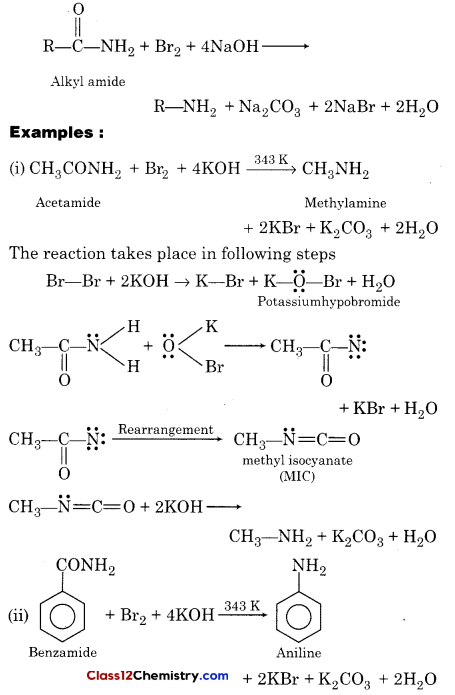 By Reductive Ammination of Carbonyl Compounds :

→ Reaction between carbonyl compounds and ammonia results in the formation of irnines which are hydrogenated in the presence of Ni to give primary amine.

→ The reaction of grignard reagent with chioramine gives primary amines

→ By this method, primary amines are formed by acid chlorides

→ The reaction in which nitrogen is released from acetyl azide and hydrolysis of formed ijitermediate in acidic or basic medium form primary amine which contain one carbon less is called Curtius reaction.

→ It is a modification of Curtius reaction. In this process carboxylic acid i heated with hydrazoic acid and cone. sulphuric acid to give primary amine.

→ Nitro compounds are reduced to amines by passing hydrogen gas in the presence of finely divided nickel, palladium or platinum at normal temperature.

→ Oximes obtained from aldehvdes and ketones by reaction with hydroxylamine can be reduced to primary amines with either Na/C2H5OH or LiAlH4. 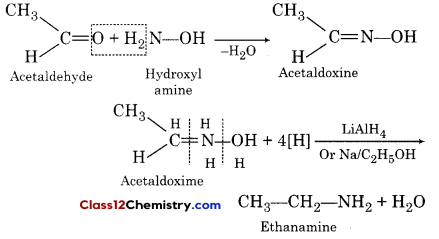 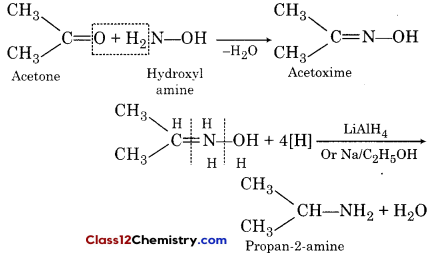