→ Poggendorff complementary principle is used for measurement of cell potential i.e., e.m.f. of cell. According to this, if a potential is applied by any other cell (standard westen cell) in opposite direction, which is equal to cell potential of a cell then current flow will stop in circuit. In such condition, potential difference between two electrodes is electromotive force of that cell. Potentiometer is used in this measurement. Circuit is established according to following figure : 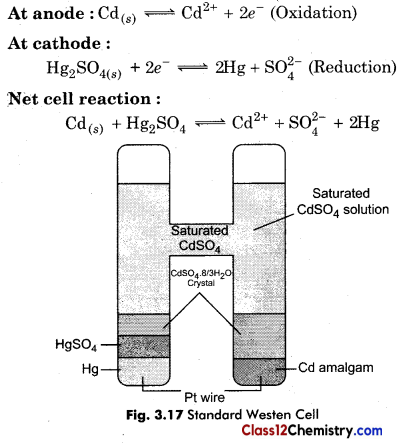 → AB is a wire of Pt-Ir alloy having one metere length of same horizontal cross-section which is stretched on meter scale. The Pt-Ir alloy is used in it due to following properties :

→ C is a lead storage battery of fixed electromotive force whose electromotive force is higher then e.m.f. of the cell. X is that unknown cell whose e.m.f. is determined by which any one cell can be taken in circuit. The e.m.f. of Cis distributed uniformly on which ABwire on establishing circuit.

→ So, the value of potnetial drop is constant on moving from A to B when unknown cell X is taken in circuit which opposes e.m.f. of C because both these are working in opposite direction to each other. On moving sliding contact on AB wire, D is obtained in galvanometer (G) at zero deflection. 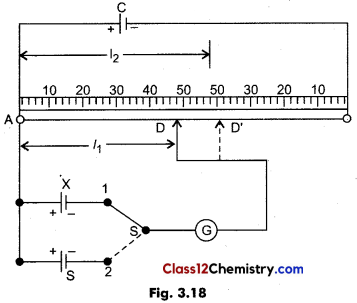 The e.m.f. of standard westen cell is certain. So, the cell potential or e.m.f. of unknown cell X can be measured easily.