→ Michael Faraday (1833-34) has done many experiments on electrolytic processes and obtained two important conclusions. The two main laws are given as below:

→ Faraday’s First Law of Electrolysis – “The amount of substance liberated at electrode is directly proportional to quantity of electric current passed in electrolytic solution.”

→ So, electrochemical equivalent of a substance is the mass of substance liberated, when one ampere current is passed in 1 second i.e. 1 coulomb quantity of electricity is passed.

→ Faraday’s Second Law of Electrolysis According to this law, “When same quantity of electricity is passed throgh various electrolytic solutions arranged in series, then the weights of substances produced at electrodes are directly proportional to their chemical equivalent weights.” For exampleWhen same electric current is passed in two electrolytic solutions arranged in series i.e., copper sulphate (CuSO4) and silver nitrate (AgNO3), then the weight of copper and silver liberated will be as follows:

→ When the same quantity of charge is passed through different electrolytes arranged in series then the quantities of substances deposited at electrodes of each electrolyte can be calculated easily. Consider the figure 3.3 in which electrolytic solutions of H2SO4, CuSO4 and AgNO3 are situated in equivalent amounts. 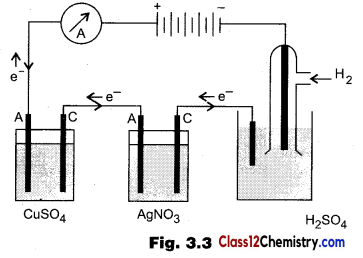 → It is known to calculate the weight of H., Cu and Ag liberated at cathodes of three electrolytes, there weights are always obtained in the ratio of equivalent weights 1:13.78: 10.788
From Faraday’s second law

→ If quantities of substances liberated from two electrolytic cells are m, and m, respectively, whose equivalent weights are E and E, respectively, then

→ from Faraday’s first law, m1 = Z1 It and m2= Z2 It in which w1 and w2 are chemical equivalents of both substances liberated.

→ So, electro-chemical equivalent of a substance is directly proportional to its equivalent weight. It is seen experimentally that if 1 ampere electric current is passed in 1 second i.e., on passing 1 coulomb electric charge, 0.0011180 g Ag, 0.0003296 g Cu and 0.00001036 × H2 are liberated. These quantities are called their electro-chemical equivalents respectively. So, that quantity (Q) of electricity which is necessary for liberation of one gram equivalent of Ag. 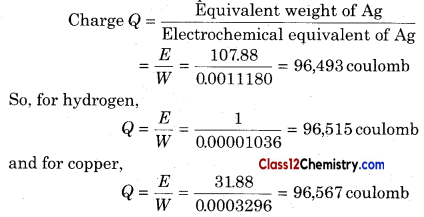 → Both laws of Faraday are called laws of electrolysis. These laws are used in electroplating techniques. These laws are very helpful to understand behaviour of various electrolytes. 1 Faraday charge is equivalent to charge of one mole electrons.