When coordination sphere is either cation or a neutral molecule, the usual name of central metal is used.

→ Naming of Ligands : The different types of differently in a complex compound .

→ Some Exceptions : Neutral ligands are given the same names as the neutral molecules.

However, some exceptions to this rule are :

→ When more than one type of ligands are present, they are named in alphabetical order without separation by hyphen.

→ If the number of a particular ligand is more than one in the complex ion, the number is indicated by using Greek numbers such as di, tri, tetra, etc. However, when the ligand includes these numbers. Example: ethylenediamine, dipyridyl etc., then bis, tris, tetrakis etc., are used in place of di, tri, tetra etc.

→ The point of attachment in case of ambidentate ligands, with more than one coordinating atoms is either indicated by using different names for the ligands or by placing the symbol of the donor atom attached.

→ In naming of such complexes, bridged ligands are separated from the rest of the complex by the using prefix ‘µ’ before their names. If there are two or more bridging groups of the same kind, this is indicated by di, µ, tri – µ etc.

Nomenclature formula to write the names of various types of complexes:

The following examples will make the rules more clear: 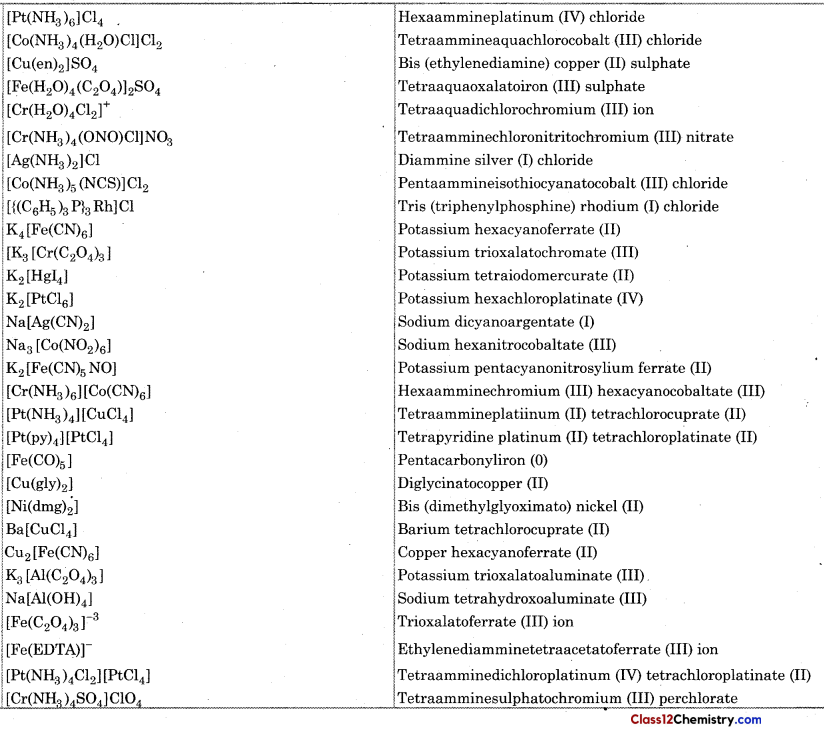 → Sidqwick suggested that after the ligands have donated electron pair to theeentrai metal ion through coordinate bonding, the total number of electrons on central atom is called effective atomic number of the central metal ion.

EAN is calculated by the following relations:

→ EAN = [Atomic no. of metal – Ox. state of metal] + No. of electron gained from the donor atoms of the ligands. 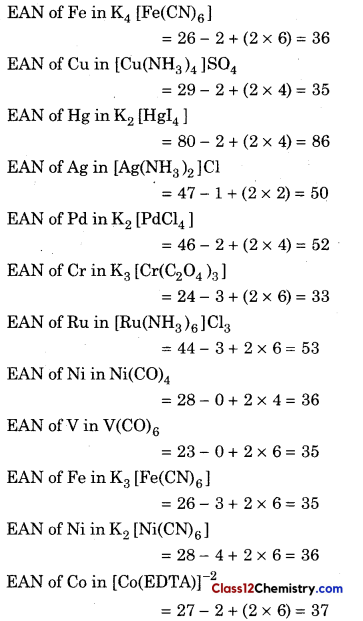 In many cases, EAN is equal to the atomic number of the inert gas of same period.