→ Those chemical substances which are used to kill and move away insects are called insect repeallants. Mostly, insect repellents mixes in air and affect respiratory system of insects.

→ A chemical substance produced and released into the environment by air animal, especially a mammal or an insect, affecting the behaviour or physiology of others of its species is called pheromone. Pheromones have a specific odour which is helpful in identification. 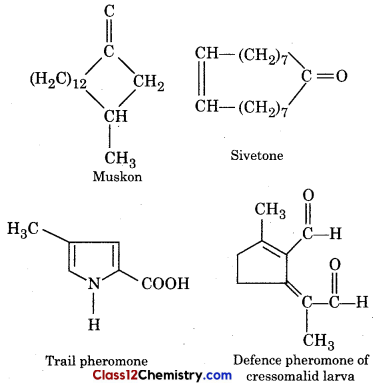 → Sex attracting pheromones are used for harmful insects control. The smell of pheromone is very intense. Its small quantity is detected by animals. If small amount of sex pheromone is kept at a place then opposite sex is attracted and come to that place and can be killed or sterilised. Thus, their reproduction rate is reduced and pests can be controlled. As it is not harmful for other species and is not sprayed, it does not cause any pollution.