Haloalkanes are one of the most organic compounds. These can preparation of a large variety compounds. Some of the reactions given below:

→ Nucleophilic Substitution Reactions : In haloalkanes. the carbon is bonded to a halogen atom (X = F, Cl, Br, I) which is more electronegative than carbon.

→ Because of high electronegativity of the halogen atom, the carbon halogen (C—X) bond is highly polarised covalent bond.

There are two types of nucleophiles which participate in substitution reaction of alkyl halides. These are :

Neutral species with at least one lone pair

These reactions proceed in two steps:

→ In first step, heterolytic cleavage of C—X bond, form a carbocation (carbonium ion) (R⊕) in the form of intermediate and a halide ion X–. Step I is the slowest step therefore it is rate determining step.

In the first step. only alkyl halide is used, therefore rate of reaction depends only upon the concentration of alkyl halide.

In second step, the carbocation is attacked by nucleophile to form product.

Order of reactivity in towards SN1 mechanism of halogen atom is same: 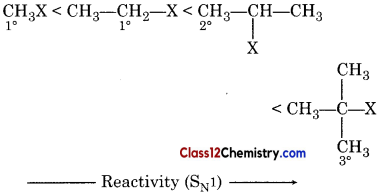 → The intermediate carbocation is planar, therefore attack of the nucleophile may be accomplished from either side resulting in a mixture of products. Therefore, if reactant is optical isomer then product is a racemic mixture.

→ Mechanism of SN1 reaction between tertiary butyl chloride and aqueus KOH can be explained in following way: 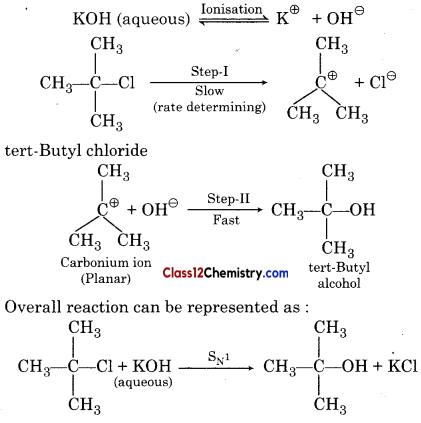 → The rate of reaction depends upon the concentration of both the alkyl halide and the nucleophile. Therefore these reactions are known as bimolecular nucleophilic substitution reactions.

→ In these reactions, the presence of bulky alkyl group on the carbon atom of C—X bond, produces steric hindrance for the attack of nucleophile. Therefore with the increase in the number of alkyl groups on carbon, the reactivity of R—X decreases. If halogen atom is same, then order of reactivity of alkyl halides towards \(\mathrm{S}_{\mathrm{N}^{2}}\) mechanism is as follows: 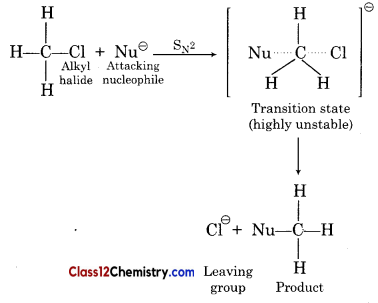 → Synthesis of Alkyl Cyanide : Alkyl halides react with alcoholic solution of KCN to give alkyl cyanides.

→ It may be noted that the reaction of haloalkane with alcoholic KCN is very important because the product formed has one more carbon atom than the alkyl halide.

→ Therefore, the reaction is a good method for increasing the length of the carbon chain by one carbon atom. Alkyl cyanides thus obtained, on complete hydrolysis gives acids, on partial hydrolysis gives amides and on reaction form primary amine. 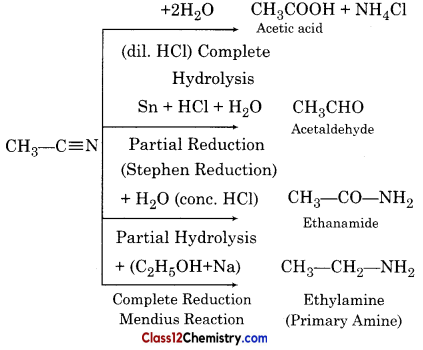 → Formation of Alkyl Isocyanides : When alkyl halide is treated with AgCN, alkyl isocyanides are obtained.

→ Alkyl isocyanides on hydrolysis form primary amine and on reduction give secondary amines. 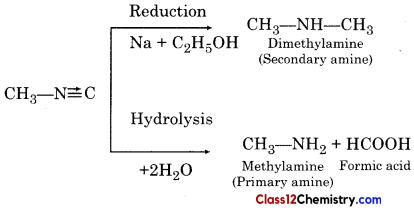 → KCN is predominantly ionic in nature, therefore, CNΘ (cyanide) ion is inihe form of nucleophile and the attack mainly occurs through the carbon end of the cyanide ion forming alkylcyanides.

→ On the other hand, AgCN is predominantly covalent and due to the presence of lone pair on nitrogen attack, occurs through N-atom of cyanide group forming alkyl isocyanides.

→ Synthesis of Alkyl Nitrite : When an alkyl halide is treated with sodium or potassium nitrite, alkvl nitrites are formed.

→ Alkali metal nitrite (KNO2) is ionic compound and the bond between K—O is ionic and therefore, the negative charge on oxygen is attacking site.

Formation of Nitro Alkanes : When alkyl halide is treated with silver nitrite (AgNO9). nitro-alkanes are formed.

→ Silver nitrite (AgNO2) is a covalent compound and the bond between Ag—O is covalent. So it does not have negative charge on oxygen. Hence, attack occurs through lone pair of nitrogen atom.

→ Forniation of Ethers : When alkyl halide is treated with dry silver oxide, ether is formed

→ If alkyl halide is treated with sodium alkoxide, then ether is formed and this reaction is called Williamson’s synthesis.

→ This reaction is quite useful for preparing ethers.

→ Formation of Thioethers : When alkyl halide is treated with sodium suiphide (Na2S) and sodium mercaptide (NaSR), thio ethers are obtained.

Reaction of Methyl chloride with ammonia occurs as follow: 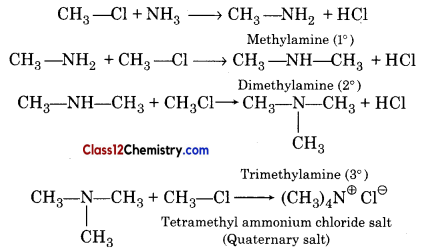 → Friedal Craft Reaction : When alkyl halide is treated with henzene in the presence of anhydrous AlCl3, alkyl benzene is obtained, in this reaction, akylation of benzene occurs. 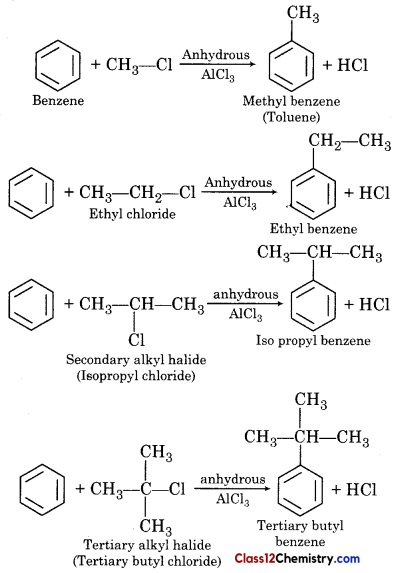 → In this reaction, carbocation is formed as intermediate with the help of AlCl3 which acts as electrophile in secondary and tertiary alkyl halides.

→ Whereas in primary alkyl halides, formation of 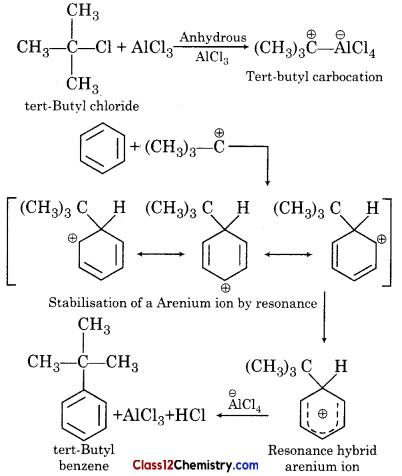 → The elimination reaction occurs by abstraction of proton from a carbon atom next to the carbon bearing halogen atom (called 13-hydrogen) and halide ion is also lost resulting a new it-bond as: 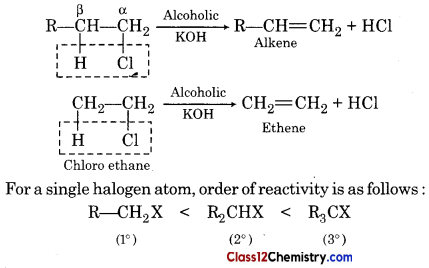 If alkyl group is fixed then.

→ If there is possibility of formation of more than one alkene in elmination reaction, then that alkene will be preferred which contains largest number of alkyl groups. This rule is called Saytzeff’s rule. The order of reactivity of alkyl groups towards elimination is : 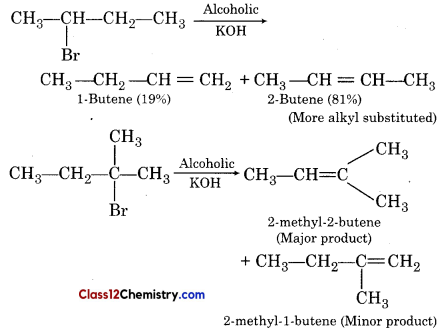 Summary of Substitution vs Elimination :

→ When the substrate is 1° halide. SN2 reaction predominates except when a hindered strong base like Me3CO is used.

→ When the substrate is a 3° halide, SN1 reaction is favoured at low temperature and in solvolysis (when no strong base/nucleophile is present and the solvent acts as a nucleophile/base); when a strong base (e.g., RO–) is used E2 reaction predominates.

→ Wurtz Reaction : When two molecules of alkyl halides react with metallic sodium in the presence of dry ether then alkane is formed containing double the number of carbon atoms present in the alkyl halides.

If two different alkyl halides are used then mixture of 3 possible alkanes are obtained.

→ Reaction with Lithium : Alkyl halides react with lithium in the presence of dry ether to form alkyl lithium.

→ ReactIon with Magnesium : When alkyl halide reacts with Mg metal in the presence of dry ether, then Grignard reagent is obtaind.

Among alkyl halides, the order of reactivity is :

→ I > Br > Cl > F; since bromides are readily available and quite reactive, these are most oftenly used.

→ The reactivity of a metal with an alkyl halide depends on its reduction potential; the more easily a metal is reduced, the more reactive it is e.g., Mg > Zn.

→ The solvent used must be anhydrous because even a trace of water or alcohols react with metals to form insoluble hydroxide or alkoxide salts that coat the surface of the metal and thus prevent it from reacting with the alkyl halide. Moreover, organo metallic compounds are strong bases and react rapidly with ever weak proton sources to form hydrocarbons. 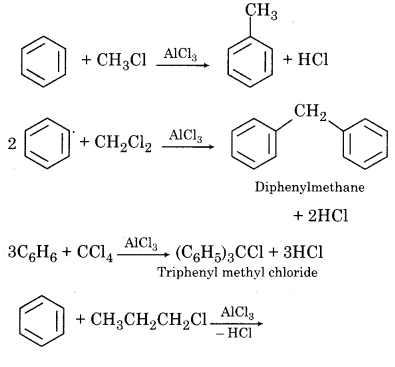 → Formation of cumene is due to more stability of the 2° carbocation as compared to 1°.

→ Reduction : Most alkyl halides may be reduced either via the Grignard reagent or directly with metal (usually zinc) and acid or with LiAlH4 to produce an alkane.

→ In these reactions, zinc atoms transfer electrons to the carbon atom of the alkyl halide. Zinc is a good reducing agent because it has two electrons in an orbital far from the nucleus, which are readily donated to an electron acceptor.