→ In these compounds, the halogen atom is directly attached to the aromatic ring. They are represented as Ar -X. For example :

→ According to IUPAC nomenclature, Haloarenes are named by adding the prefix of halogens and assuming these compounds as derivatives of benzene and names are written For example:

→ In Aryl halide C6H5Cl, the chlorine atom is attached to benzene ring from sp2 hybridised carbon atom. Due to resonance effect (+R) of halogen atom, there is partial double bond character in carbon-halogen bond, therefore this bond does not easily breaks. The C—Cl bond length in chiorobenzene is 1.60 A whereas C—Cl single bond length is 1.77 A.

Resonating structures of chiorobenzene can be shown as:

→ Due to this double bond character, vinylic halide shows lesser reactivity like haloarenes.

Methods of Preparation of Haloarenes By Halogenation 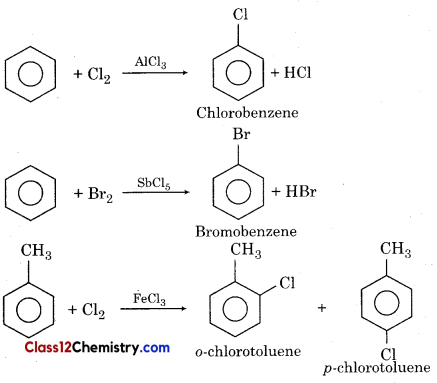 → Reaction of benzene with iodine is reversible. Therefore the reaction is carried out in the presence of an oxidising agent (HNO3 which oxidises HI formed in the reactions).

→ Mechanism : Mechanism for chlorination of benzene can be shown as below. This is an electrophilic substitution reaction. 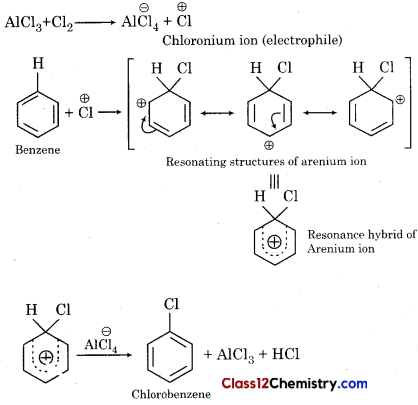 → Halogenatlon ¡n Side Chain : If reaction of alkyl benzene with chlorine is carried out in the presence of sunlight and in the absence of halogen carrier, then benzyl chloride is obtained.

→ If chlorine is passed in excess then benzotrichioride is formed. 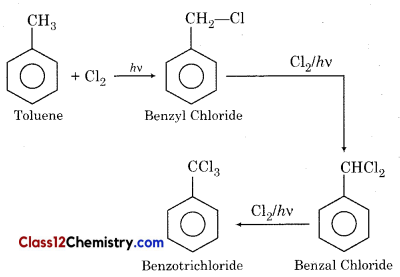 → Benzene is converted into diazonium salt through anihne and this is known as “diazotisation”. 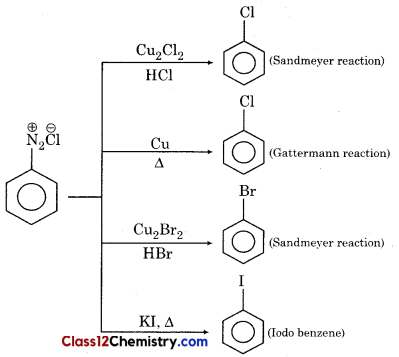 → Rasching Process : It is an industrial method for the preparation of chiorobenzene. When mixture of vapoure of benzene, air and hydrogen chloride is passed through copper chloride catalyst, chiorobenzene is obtained.

→ From Hunsdiecker Reaction : Action of bromine on silver salt of monocarboxylic aromatic acids in the presence of CCl4, bromobenzene is obtained.

→ These are generally colourless, oily liquid or crystalline solids. These are insoluble in water but soluble in organic solvents. Their density is more than water and they have a characteristic smell. Decreasing order of melting point and boiling point is as follows:

→ Chlorine atom present on benzene ring has +R (resonance) effect and direct the incoming electrophile at ortho and para positions. Therefore due to +R effect, Chlorine atom is ortho-para directing. It can be understood by the following resonating structures: 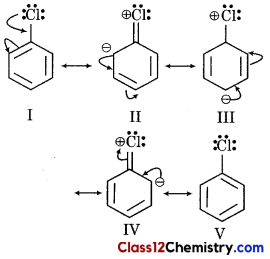 → In haloarenes, due to – I effect of halogen atom, electron density decreases and attack of electrophile occurs slowly. Due to this reason only haloarene is less reactive towards electrophilic substitution reactions in comparison to benzene. Some electrophilic reactions are as follows : 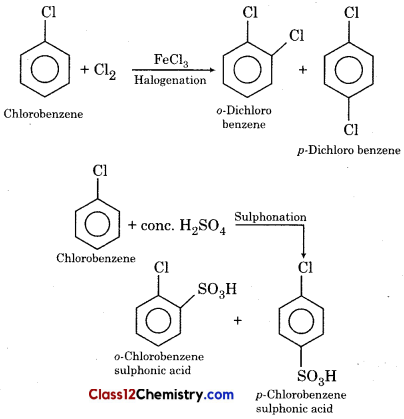 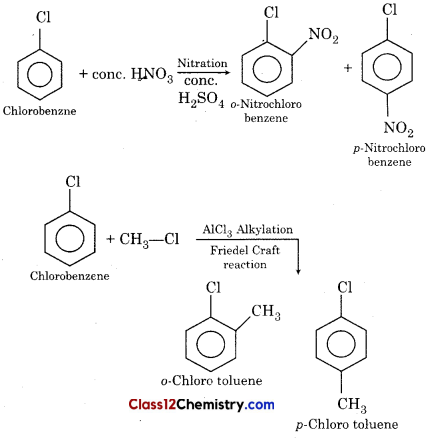 → Reaction with Sodium : Aryl halides react with sodium like alkyl halides. In this reaction two benzene rings are attached through σ (sigmabond and form diphenyl. This is known as ‘Fitting Reaction”. 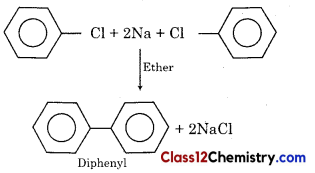 → If aryl halide is heated with alkyl halide, then alkyl benzene forms and this reactions is known as “Wurtz Fitting Reaction”. 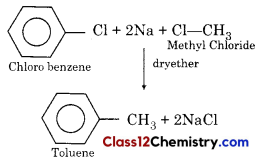 → Reaction with Copper Metal : lodobenzene when heated with copper powder, it gives diphenyl. This reaction is called “Ullmann reaction”.

→ For the formation of chiorobenzene from Grignard reagent tetrahydro furon (THF, is taken in place of ether.

→ Reduction Reactions : Chorobenzene undergoes reduction with Ni-Al alloy in the presence of an alkali to benzene.

→ Nucleophilic Substitution Reaction : Due to resonance, there is a partial double bond character in C—X bond of aryl halide, as a result, the bond cleavage becomes difficult. 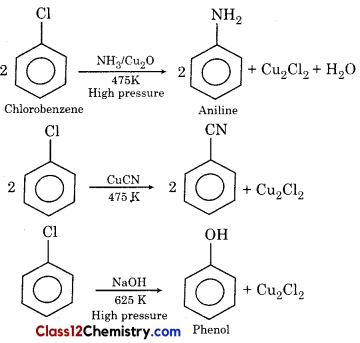 → If an electron withdrawing group like NO2,— SO3H,—CN, —COOH etc., is present at ortho or para position or both to halogen atom in halobenzene then these groups present on benzene ring attract electron density towards themselves and activate the benzene ring for nucleophilic substitution, then reaction proceeds in normal conditions. For example, effect of NO2 group is as follows : 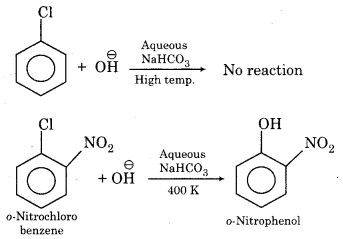 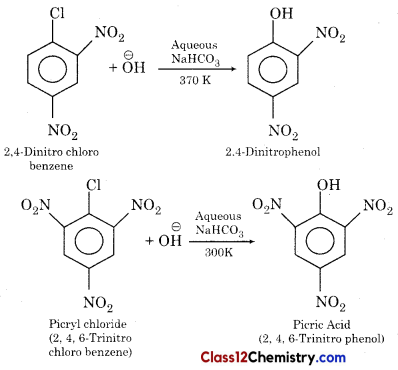 → Benzyl halides give SN type of nucleophilic substitution reactions because in this reaction the benzvl carbonium ion formed is stabilised b resonance. That is why only they are most reactive. 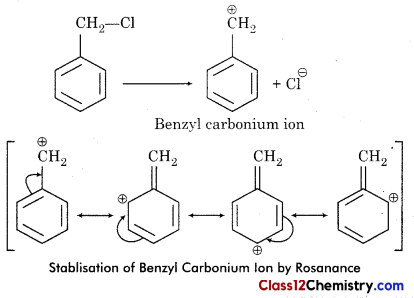