→ Among all the halogens fluorine is the most reactive element so it is known as super halogen. The last element Astatine of this group-17 is radioactive in nature hence it occurs only in traces. The name halogen was given by Schweigger in 1811.

→ All the balogens are very reactive so they are not found in free state or native state in nature. They occur in combined state (except Astatine, as it is radioactive in nature). Halogens our na halide (X–) salt Flourine and chlorine are fairly abundant in the earth’s crust while bromine and lodine are lesser abundant, Fluorine is present mainly as insoluble fuorides. Por example Cryolite (Na3AlF6), Fluorspar (CAF2).

→ Pluorine is thirteenth most abundant element of the earth’s crust Chlorine cours as chlorides to the extent of about 0.14% in earth’s crust. The main source of chlorines water (2.8% by ma x epte water it also present in salt well and salt beds.

The relative abundance of halogens are given in table 7.15.

The physical properties of group 17 elements are given in table 7.16

→ Physical State : All the halogen elements occur in the form of non polar, covalent dintomic molecules. Their physical states are as follows –

→ The difference in physical state is due to difference in the extent of van der Waals forces of attraction which depend upon the atomic wine and atomie weight. Since the size and atomie weights of urine and chlorine are less bence they exist in the form of gas. Because of larger size and larger weight, bromine occurs as liquid and iodine as solid (An sine increase, van der Waal’s forces of attraction also increase).

→ Atomic and lonie radil. In their respective periods halogens have the smallest atomie rudis. Because on moving left to right in period nuclear charge increases hence atomic radius decreases On moving down the coup atomic size increases because number of shells increases The size of halide ion is always greater than the size of halogena because with the addition of one electron the effective nuclear chance decreann hence the size increases.

→ Electron gain enthalpy or Electron affinity: On moving down the group the electron guin enthalpy first increases from fluorine to chlorine then decreases

→ The low value of electron gain enthalpy of fluorine is due to its small size i.e., having high electron density which makes the addition of electron somewhat difficult. But halogens have maximum electron gain enthalpy in their respective periods. It is due to its electronic configuration ng up which is one electron less than the stable noble gas configuration (n ap). Due to this reason halogens have the maximum tendency to accept electron.

Iodine has maximum tendency in group-17 to make eation

→ They show colour due to the fact that their molecules absorb light in the visible region. Due to the absorption of light they get excited and jump to higher energy level while the remaining light is transmitted This transmitted light is men in the form of colour.

→ Actually the halogens show the complementary colour. As we have seen that the colour becomes deeper and deeper as the atomic number increes from fluorine to iodine. This change in colour is called as blue shift or bathochromie shift.

→ Cl – Cl and even smaller than that of Br – Br. It is due to this reason that fluorine has very small size and have greater electron-electron repulsion between lope pair of electron.

→ Thus, the order of bond dissociation energy of group-17 is as follow –

The value of bond energies of halogens are as follows:

→ Fluorine is the first member of group-17. It differs from other members of this group. This differences are due to the following reasons:

→ The main points of differences between fluorine and other halogens are as follows:

→ Due to the presence of tendency to form hydrogen band, HF extat in Ancinted form while other halogen acids exist as monomers.

Due to the absence of Vacant d-orbitals it cannot form polvfluoride ions while other members can form.

Fluorine can react with water and form a mixture of oxygen and osone. But other members do not form oxygen and ozone.

For example: AIF3, SnF4 are ionic while SnCl4 is covalent.

HF used for etching of glass it can react with glass while other halogen acids do not show this reactions.

Due to above special properties of fluorine it is called as super halogen.

→ Halogens are higly reactive elements due to their high electronegativity, high negative electron gain entalphy values and low bond discelation energies. Fluorine is the most reactive element among group-17. The important chemical properties of group-17 are given below

→ Since fluorine is the highest electronegative element among the periodie table hence it always shows only – oxidation state. Other halogers can also show higher positive oxidation states like +3, +5, +7 due to presence of empty L-orbitals.

→ As fluorine do not have empty d orbitals so it does not show higher oxidation tates. The higher cucidation state shown by chlorine, bromine sod iodine is due to the presence of empty orbitals where outer por pelectrons can easily be promoted as shown below: 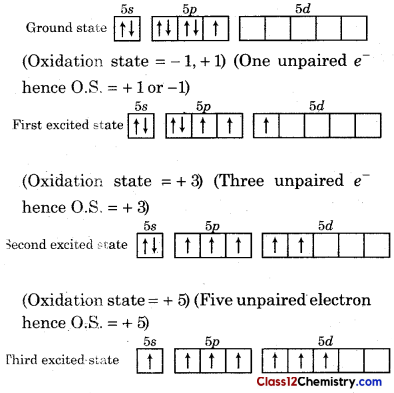 → Solubility : Halogen molecules are non polar in nature hence they are insoluble in polar solwenta like water, alcohols etc. Eut fluronie reacts with cold water in dark and form the mixture of oxygen and one as given below.

→ Cl2, Br2 and I2 are highly soluble in organic solvents like CHCl3, CCl4, CS2 and hydrocarbon etc. They dissolves in CCI, and CHCl, and give yellow, brown and purple colour respectively.

→ Chlorine and bromine dissolves in water in presence of sunlight and decomposes water. The reactivity of Br2 is lesser than chlorine.

→ Oxidising Power : All the halogens have a strong tendency to accept an electron due to high elecgronegativity and high negative value of electron gain enthalpy, hence they act as strong oxidising agent. The oxidising power of halogens decreases from F2 to I2 is the strongest oxidising agent in group-17. F, On oxidise all the other halide ions into halagens. The involved reactions are as follow:

Hence, the oxidising power is as follows:

The relative oxidising power can further be explained with the help of the following reactions.

→ The hydration energy ∆hyd H– of F– ion(- 460 kJ mol is higher than Clion (-343 kJ mol-) which is due to small size and high charge density of fluoride (F–) ion. On calculating the net energy released, we can calculate the value of standard reduction potential.

→ The reactivity of halogen towards hydrogen decreases down the group. For example: fluorine reacts with hydrogen violently even in the dark and cold atmosphere. 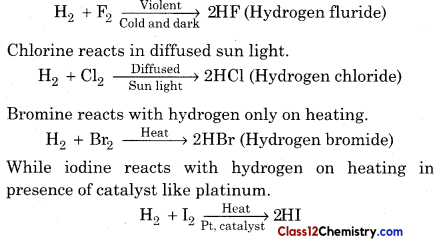 Hence, the order of activity of halogens with hydrogen is

→ On moving down the group the boiling point increases regularly from HCI to HI because as molecular weight increases the extent of van der Waal’s forces of attraction increase hence, boiling point also increased.

→ Volatility : The volatility of halide decreases down the group from HCI to HI because the extent of van der Waals interaction increases. But the HF is least volatile due to the presence of hydrogen bonding

→ Acidic behaviour : In gaseous state hydrogen halides do not behave as acid because they are covalent in nature but in aqueous state they can ionise and behave se acid by donatine H ion. The acidic strength of these hydrogen halide incorases down the group because sine incron ,bondenergy decree, hence the tendency to donate proton (H+) increases.

Hence HF in the wenkeat acid while He is the strongest acid.

→ Reducing character : On moving down the group the reducing behaviour incerns because the bond dissociation energy decreases.

→ Do you know: Only HF has tendency to react with glass. This tendency of HF is used in etching of glass.

All the properties of hydrogen halides are summearised in tahle given below:

→ Reactivity towards oxygen : Oxygen and halogen react with each other directly or indirectly to form a lot of compounds. Some of them are as follows:

→ Oxides of fuorine: Fluorine forms two compounds with oxygen. They are OF2 and O2F2. As the electronegativity of fluorine is higher than oyren bence they are called as fluorides not oxides.

Only OF2 stable at 296 K temperature. These oxygen fluorides can be prepared as follows:

→ Both the compounds ie. OF2 and O2F2 are strong fluorinating agents. O2F2 can oxidise PuF6 and the reaction is used in removing plutonium as Puf from spent nuclear fuel.

→ From the above table, it is clear that all halogens react with oxygen and form various oxides in which their oxidation states range from +1 to +7. Chlorine forms a large number of oxides while iodine form least number of carides.

→ These oxides are binary in nature. They form covalent bonds due to small difference in their electronegativities i.e., in between oxygen and halogen It is quite interesting that the stability of oxides of iodine is greater than those of chlorine while bromine oxides are least stable lodine-oxygen bond is stable due to greater polarity of the bond.

→ Oxides of chlorine i.e., Cl2O, ClO2, Cl2 O6, and Cl2O7 are highly reactive and behave as oxidising agents. They have tendency to explode. ClO2 is used as a bleaching agent for paper pulp, textiles and in water treatment.

→ The oxidea of bromine le, Br2O, BrO2 and BrO3 are least stable halogen and t hey exist only at low temperature. They are powerful oxidising agents.

→ The oxides of iodine are I2O4, I2O5 and I2O7. Out of these only I2O5 is the most stable. These oxides decompose on heating. They behave as good oxidising agent and are used in estimating the carbon mono oxide Because it oxidises Co to CO2 quantitatively liberating iodine which can be titrated against sodium thiosulphate.

→ Reactivity towards Metals All the halogens reacts with almost all metals and non-metals except He, Ne, Ar to form binary eompounds. These compounds are known as halides. These halides may either be simple or complex molecules which differ from each other only in their structures and stoichiometries.

→ Halogens reacts with highly electropositive metals like NA, K, Ca, ete, to form ionle halides. These sonic halides have high melting and boiling points. The ionic character of these haldes decreased down the group because electronegativity decreases.

→ Halogens reacts with three metals which have very high ionisation energy like Sn, Pb, Sb, ete, to form covalent halides. If we compare the covalent character of these halidea for similar metal having different oxidation atates then the holides of metala with high oxidation state are more covalent than the halides of metals with lower oxidation state. For example:

→ Halogen reacts with non-metals and form various covalent halides like PFs, PCB, PBrs. Asig.8, Cloete. For a single halogen the covalent character increases with increase in oxidation number of metal. For example

NaCl < MgCl2 < AlCl3 < ThCl2 (Covalent character) The above order is according to Fajan’s Rule.