The main characteristic features of the diagram are given below:

→ The curve for the formation of metal oxide from its metal by the reaction of oxygen always slope upwards because the value of ∆G° increases with increase in temperature.

→ For some metals like Ag, Hg, the value of ∆G° exceeds zero i.e, it becomes positive at a very high temperature. It means that both mercuric oxide (HgO) and silver oxide (Ag2O) show self decomposition at high temperature i.e. they do not require any reducing agent for their reduction. 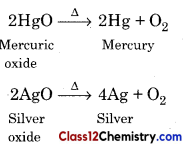 → If we consider Ellingham diagram carefully then we will observe that the curve for the formation of carbon monooxide (CO) shows a downward trend. It means during the reaction, the value of ∆S° increases therefore the value of ∆G° becomes more negative with increase in temperature.

→ Note : The element involved in the formation of oxide placed lower in the Ellingham diagram can reduce the oxide of the element placed higher in the diagram:

→ Similar diagram for sulphides and halides are also constructed and it becomes clear why reduction of sulphides is difficult. Therefore, the ∆G°of sulphides is not compensated.

→ Each curve in plot is a straight line except with some change in phase (solid → liquid or liquid → gas) takes place. The temperature at which such change occurs, is indicated by an increase in the slope on positive side.

Description of Ellingham Diagram of Probability of Thermal Reduction of an ore :

→ It is helpful in the selection of suitable reducing agent for the reduction of metal oxides into metal.
During phase transformation (solid → liquid → gas). there is increase in entropy hence ∆G° will be positive.
During phase transformation (gas → liquid → solid) due to decrease in randomness of molecules, entropy decreases hence ∆G° will the negative.

→ Value of ∆G° will be zero on intersection point of curves. Below this ∆G° is negative and above this AGR is positive. Hence the metal oxides situated above the point are easily reduced by this metal at temperatures below the intersection point.

→ The possibility of any chemical change thermodynamically, sign of ∆G° should be negative hence there will be decrease in free energy. Reaction will not occur if sign of ∆G° is positive.

→ There is sudden change in the slopes of curves at melting point and boiling point of metal oxides. At this temperature, for phase transformation (gas → liquid → solid) ∆S° becomes highly negative (decrease in entropy) as a result of which ∆G° becomes positive.
AG° = AH -T(-∆S°)]
AG° = AH + T∆S
∆G° = Positive at high temperature)

→ As the metal is in liquid phase at reduction temperature, reduction of metal oxide (solid) occurs easily because on solid to liquid phase transformation ∆S° is positive (entropy increases) as a result of which ∆G° becomes negative.
∆GR – AH-T (U∆S) ∆GR – ∆H-T∆S
∆GR = Negative.