→ Polychioro fluoro akanes are known as freons when chlorine and fluorine are attached with carbon atom, the compounds formed are known as chiorofluoro carbon (CFCs). which are also known b’ the name of froons.

→ Chioro fluoro derivatives of methane and ethane can be prepared by the reaction of HF with carbon tetrachioride (CCl4) or hexachioro ethane in the presence of SbCl5. This reaction is known as Swarts reaction. For example: 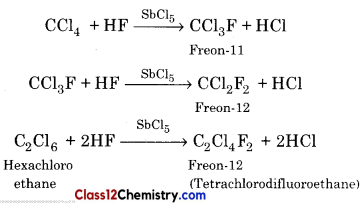 → The number of carbon, hydrogen and fluorine atom present in molecular formula of freon are used in the following way for the nomenclature of freon. For e.g.,

Freons are colourless, odourless and volatile liquids. They are highly inert and highly stable even at high temperature and pressure.

→ Freons mainly depletes the ozone layer. If ozone gas is present on surface of earth then it is poisonous but 90% part of ozone layer is situated in stratosphere, there it acts as life saving gas for us.

→ Ozone layer absorbs about 95% of the harmful UV radiations of sunlight and protects the atmosphere of earth. Excess of UV radiations creates following harmful effects:

→ Due to extreme chemical stability of freons (Chiorofluoro carbons) they presist in the troposphere and enter the stratosphere. rrhese CFCs are subjected to photochemical dissociation by intense UV radiation.

→ Now, chlorine atoms destroy the molecules of ozone by many destructive cycles. In one of the cycles, in simplest example one chlorine atom reacts with one ozone molecule and form ClO (Chlorine monoxide) by taking one oxygen atom and releasing one oxygen molecule.

→ Chlorine monoxide (ClO) reacts with another molecule of ozone and form one chlorine atom (free radical) and two oxygen molecules.

→ This chain reaction continuously goes on and one single chlorine atom destroys 100000 (lakh) 03 molecules. In this way, due to Freons, quantity of ozone has decreased and ozone layer is depleting which is imparting a negative effect on environment of earth.

→ Production of gases which depletes the ozone layer has to be minimized or stopped to further cease the depletion of ozone layer. Formation and use of CFCs is decreasing worldwid. To increase awareness among for ozone conservation. Every year on 16th September, Ozone Conservation Day is celebrated.