→ These elements are also known as inner-transition elements because the antipenultimate energy shell (next to penultimate) i.e. (n – 2) f-orbitals, lie comparatively deep within the kernel. In these element f-subshell is incompletely filled both in atomic as well as in ionic state. f-block has two series :

→ There is quite similarities in the properties of Lanthanum (57La) and fourteen elements of Lanthanides, hence lanthanum is also included with the studies of lanthanides. The general symbol for these elements is Ln.

→ Similarly, the properties of actinium and actinides are so similar that the fifteen element from Ac to Lr can be considered as equivalent to one element. These element are assigned at different positions in order of their increasing atomic numbers, the symmetry of the whole arrangement would be disrupted.

→ Due to this reason, the two series i.e. 4f series and 5f-series are placed at the bottom of the periodic table. These two series 4f-series (Lanthanides) and 5f-series (Actinides) constitute one block of the element i.e. f-block. The general electronic configuration of block elements is

Table 8.1: The position of transition elements in periodic table 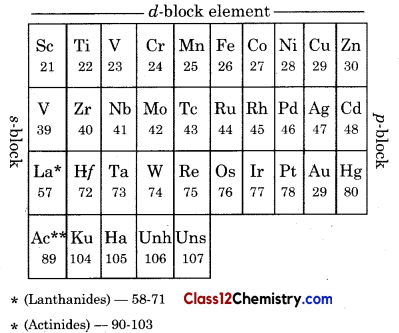 → In other words we can say that transition element is the one which has incompletely filled d-orbitals in its ground state or in any its oxidation states. The general electronic configuration of these elements is (n – 1)d1-10 ns0, 1 or 2

There are four transition series in the d-block. These are as follow :

→ 3d-series : In this series the last electron enters in 3d-subshell and its electronic configuration is 3d1-10 4s1-2. It includes the elements from atomic number 21 to 30. There are 10 elements in the series, which starts from Scandium (21Sc) and ends at Zinc (30Zn). It is also known a first transition series.

→ 4d-series : In this series the last electron enters in 4d-subshell and its electronic congfiguration is 4d1-105s1-2. It includes the elements having atomic number 39 to 48. There are 10 elements in this series, which starts from Yattrium (39Y) and ends at Cadmium (48Cd). It is also know as second transition series.

→ 6d-series : In this series the last electron enters in 6d-subshell and its electronic congfiguration is 6d1-10 7s1-2. It includes the elements having atomic number 89 and 104 to 112.

→ Thus there are 10 elements in this series which has Actinium (89Ac), Rutherfordium (104Rf) to Ununbium (112Uub). It is also known as fourth transition series. The elements with atomic number 104 to 112 are synthesised recently. These elements are knwon as trans actinoid sereis.