The method by which crude metal is obtained in free state from concentrated ore is known as extraction. This process completes in the following two steps:

Conversion of Concentrated Ore into Metal Oxide : Two methods are used for the conversion of ore into oxides. These are as follows:

→ Calcination It is a process of heating the ore in absence of air below its melting point. This method is commonly used to convert hydrated oxides or hydroxides and carbonates into oxides. This process is performed in a reverberatory furnace. During calcination, following changes may occur : 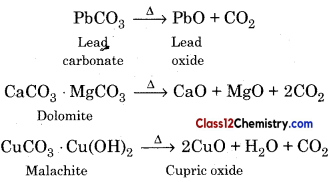 Roasting : It is a process of heating the ore in the excess supply of air below its melting point. This method is used to convert sulphide ores into respective oxides. This process is also performed in reverberatory furnace or a small blast furnace. During roasting, following changes may occur : 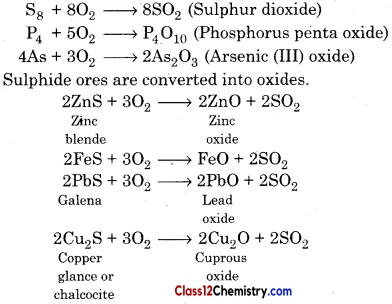 During roasting, the sulphur dioxide is produced which can be utilised in the manufacturing of sulphuric acid (H2 SO4). 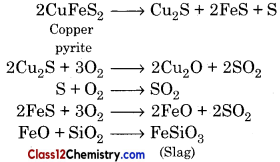 Some metal sulphides are changed into their chlorides.

When metal chloride reacts with mercury then amalgam form.

→ Reverberatory Furnace : As we know that calcination and roasting processes are carried out in reverberatory furnace. In this furnace, the fuel does not come in direct contact with the charge. The furnace has three parts i.e.. fire place, hearth and chimney. The fire place is built at one end of the furnace. The roof is made slanting and connected with chimney on the other end. The hot gases are reflected by concave ceiling over the hearth. The furnace is made up of fire bricks. Air supply is controlled by vents and direct blast. 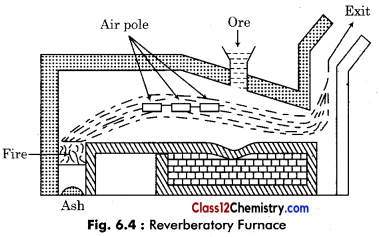 Differences between Calcination and Roasting

→ The process of smelting is done in blast furnace. Here coke or charcoal behaves as reducing agent and converts oxide ore into molten metal. Some times during reduction, an additional reagent is also added to the ore to remove the impurities still present with ore. This additional reagent is known as flux.

→ This flux combines with infusible impurities present with ore and converts it into fusible product. This fusible product is known as slag. In this way during smelting ore is converted into crude metal In smelting, carbon mono oxide can also used as reducing agent.

→ Smelting process can be used to reduce oxides of metals like Zn, Cu, Sn, Pb, Fe etc. Some reactions involved in reduction by smelting using carbon or carbon mono oxide (produced by incomplete combustion of carbon) as reducing agent is as follow: 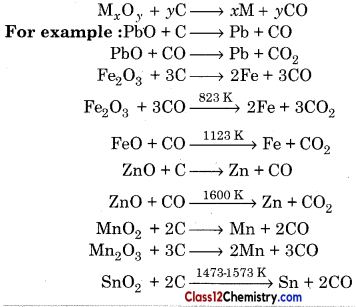 Note: The process of smelting is done in blast furnace.
→ Flux : The substance, which is used to convert non-fusible gangue present in ore into fusible compound at very high temperature, is called flux Flux combines with gangue and produce a fusible compound known as slag, Slag is not soluble in molten metal. Being lighter than molten metal, it floats over the surface of metal and can be skimmed off easily.

→ The choice of flux depends upon the nature of gangue present in the ore. On the basis of the nature of impurities, flux are classified into two classes. These are as follows: 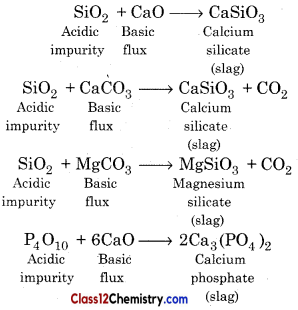 → Reduction by Aluminium (aluminothermy): This process is used to reduce those metal oxides whose melting points are very high. The reduction of these oxides of carbon as carbon mono oxide is not satisfactory. In this method, a mixture of calcined or roasted oxide ore and aluminium powder is used. This mixture is known as thermite mixture. This thermite is taken in a steel crucible placed in a bed of sand.

→ For the ignition of mixture magnesium powder and barium peroxide are used. Once thermite mixture is ignited, the reduction is started and goes on upto completion. The process is highly exothermic therefore the metals are obtained in the molten form. This process is known as Goldschmidt thermite process. This method is used to reduce Cr2O3 Mn3O4, Fe2O3 etc. The reduction process of Fe2O3 by aluminium is used to weld broken parts of heavy machinery of rail, girders, bridges etc. It is known as thermite welding.
For example :

→ Reduction of Magnesium or Sodium : Certain halides of metals like titanium, zirconium, vanadium etc. are reduced into pure metal by sodium or magnesium in a closed vessel by heating.
For example:

→ Reduction by Hydrogen : Some metal oxides are reduced by hydrogen. As hydrogen is very expensive and highly exothermic and inflammable so it is used in very few cases.

For example : Oxides of Tungsten, molybdenum and nickel are reduced by hydrogen gas at a very high temperature. 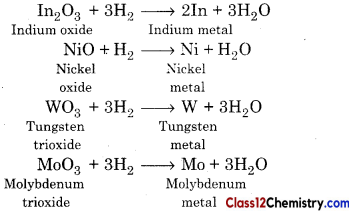 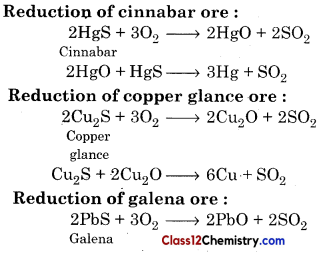 → Electrolytic reduction : Oxides of highly electropositive metals like Na, K, Mg, Ca, Al etc., are commonly extracted by the electrolysis of their fus d salts. Electrometallurgy is the process of extraction of metals by electrolysis. The extraction of these metals can be done by the electrolysis of their fused oxides, hydroxides or chlorides. Sometimes to lower the fusion temperature or to increase the conductivity or both, small amount of other salts are also added to fusion mixture.

Down’s Process : Extraction of sodium from the mixture of fused sodium chloride and calcium chloride is known as Down’s process. 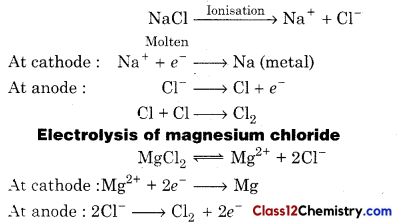 → Hydrometallurgy: It is also known as displacement method. Some metals like gold and silver are extracted from their concentrated ores by leaching. First of all, their ores are dissolved in suitable reagents like acids or bases to convert them into soluble complex and to reinove insoluble impurities. Then the metal can be recovered from their soluble complex by reprecipitating it with the help of highly electropositive metals. For example:

Silver glance, an ore of silver is first digested with sodium in order to convert it into sodium argentocyanide, a soluble complex. The solution is further treated with zinc metal then silver metal is recinitated. 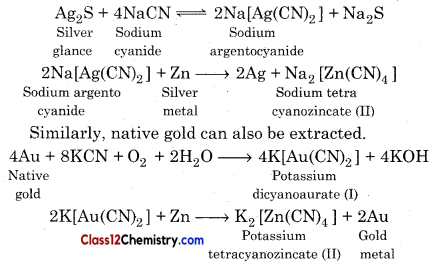 → Hence, “hydrometallurgy is the process of extraction of metals by digesting their ores into suitable chemical reagent and then precipitating it by more electropositive metal with the help of displacement.”