According to Raoult’s law, “the relative lowering in vapour pressure of solution for a non-roletile solute is equal to mole fraction of solute.”

Because solution in very dilute. So ng « na So, the value of ng is relatively negligible than na
Hence, 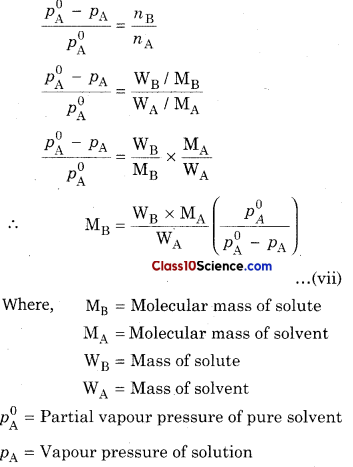 Molar mass of non-volatile solute can be determined form above equation if other all quantities are known.

The elevation in boiling point can be explained by plotting a graph between vapour pressure and temperature. 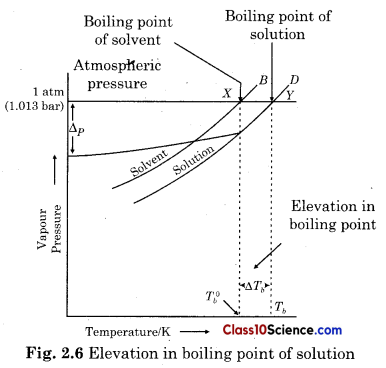 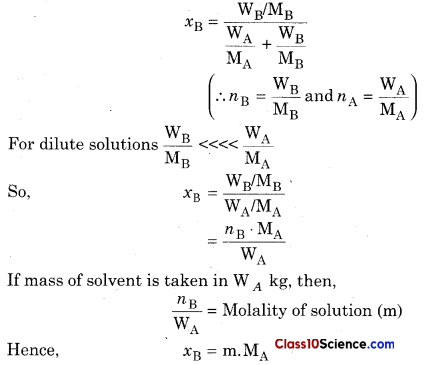 On putting the value of xB in eq. (viii)
∆Tb = k MA . m
∆Tb = Kb m …………..(ix)
(New constant Kb = k . MA)
New constant Kb is called ebullioscopic constant or molal elevation constant.
Elevation Constant(kb)
If molality of solution in equation (ix) (m) = 1
Then, ∆Tb = Kb
So, ebullioscopic constant of a solvent is equal to its elevation in boiling point when I mole solute is dissolved in 1000 g solvent. Its unit is Kkg mol-1.
Relation Between Elevation in Boiling Point and Molecular mass of Non-Volatile solute
We know that 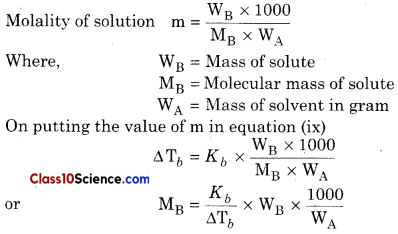 Where
MB = Molar mass of solute
Kb = Molal elevation constant
(Ebullioscopic constant)
WB = Mass of solute
∆Tb = Elevation in boiling point
WA = Mass of solvent in g
According to van’t Hoff, Kb can be related to latent heat of vaporisation solvent as follows: 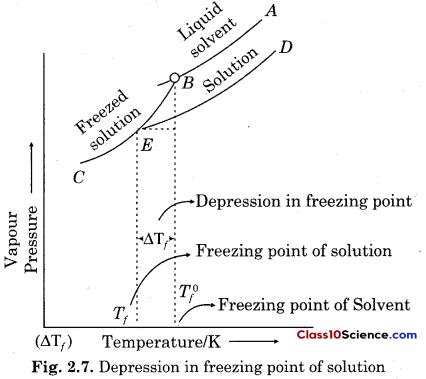 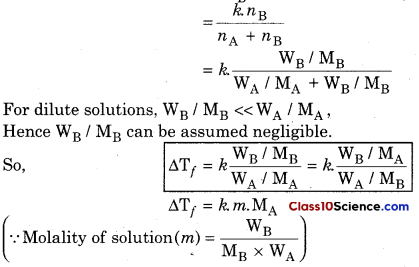 → Molal depression constant of a solvent is equal to its depression in freezing point while one mole solute is dissolved in 1000 g solvent. Its unit is K kg mol-1. 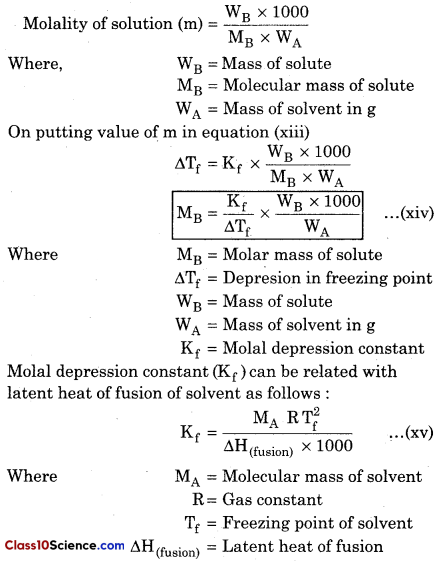 → The molecules of solute can not pass through membrane. Funnel, filled with concentrated solution of copper sulphate (CuSO4), is placed in a beaker containing water. 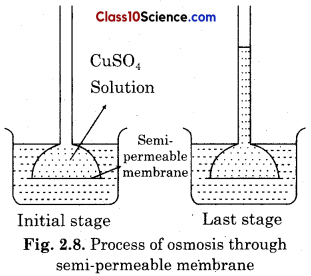 → After some time it is observed that the level of solution increases in this funnel. This is due to flow of molecules of solvent towards solution through semi-permeable membrane. This process is called osmosis. Osmosis is greek word which means Osmos = to push”. First of all, it was seen by Abe Nollet in 1748.

→ A membrane which allows the solvent molecules to pass through but not the solute particles is known as semipermeable membrane. For example bladder of pig, parchment paper or synthetic like cellophane etc. These membranes are like continuous sheet or film. These have microscopic pores or network of pores.

→ Due to this reason, only solvent molecules can pass through them but not of solute. Semi permeable membrane can also be synthesized from chemicals. For example, when the aqueous solution of potassium ferrocyanide and copper sulphate is mixed in porous container then the precipitate of copper ferrocyanide with gelatin is filled in pores of porous container and this acts as semi-permeable membrane.
2CuSO4 + K4 [Fe(CN)6] → Cu2 [Fe(CN)6] + 2 K2 SO4
Besides this, many types of polymeric membranes like cellulose acetate and cellophane are also available.

→ As we have studied that the spontaneous flow of molecules of solvent from pure solvent to solution through semi-permeable membrane or dilute solution to concentrated solution is called osmosis. Whereas particles (molecules or ions) of various substances occur freely with each other in process of diffusion. We can differentiate osmosis and diffusion as follows:

→ The external pressure applied on solution which is required to prevent the flow of molecules of solvent through semi-permeable membrane and to establish equilibrium insurface, is called osmatic pressure.

→ A glass container divides in two parts with the help of semi-permeable membrane for experiment. A narrow tube of glass is attached in one part by which solvent is filled while a broad tube is attached in second part in which frictionless piston for presention of water is attached. Solution is taken in this part.

→ When process starts, the molecules of solvent will try to move in solution through semi-permeable membrane due to which piston will move upwards. While the level of water will decrease in narrow tube. 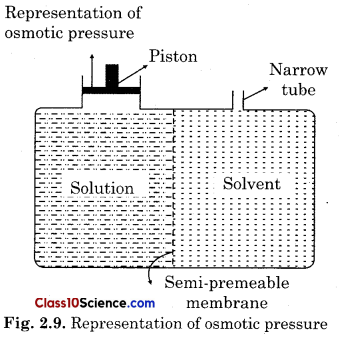 → If some external pressure is applied above piston then this pressure prevents flow of solvent. It can be seen clearly in narrow tube which will fixed the level of solvent in this position.

There are following methods for the determination of osmotic pressure :

If more pressure is used than osmotic pressure on solution then the flow of solvent takes place from solution to pure solvent through semi-permeable membrane. This proces is called reverse osmosis. This process is used in the purification of sea water and hard water etc.

Those two solutions which do not allow flow of solvent after separating from semi-permeable membrane i.e., their osmotic pressures are same, are called isotonic solutions. Their molar concentrations are also same.

The solution among two solutions having different osmotic pressure, whose osmatic pressure is higher, is called hypertonic solution, relative to other solution.

The behaviour of molecules of solute in dilute solutions is like that of behaviour of gas molecules. van’t Hoff has also applied gas laws on solutions which are as follows: 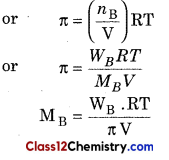