The cell which can convert electric energy into chemical energy, is called electrolytic cell. Molten electrolyte or its aqueous solution filled in electrolytic cell is electrolysed on passing electric current. The process takes place here is a non-spontaneous redox process. This process is called electrolysis. It is clear that oxidation-reduction reactions takes place in this cell are of non-spontaneous nature. So, in the cell reaction, increase in free energy(∆G > 0) takes place.

→ The process of electrolysis is completed by taking suitable amount of solution of an electrolyte in an apparatus. This apparatus is called electrolytic tank. It is made up of insulators like glass etc. Two metallic rods are dipped in this solution which are connected with terminals of battery with the help of wires. 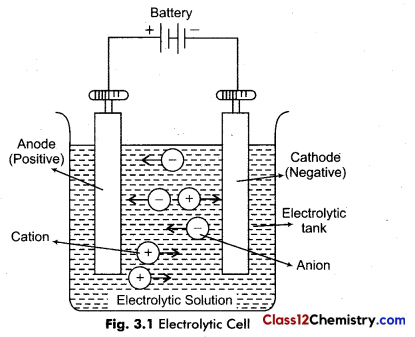 → When electrolytic solution is formed then it dissociates in cations and anions. On passing electric current in solution, ions present in solution attract towards oppositely charged electrodes. As a result, cations move towards cathode and anions move towards anode. Anion gives its electron on reaching at anode and cation accepts its electron on reaching at cathode.

→ So, cations and anions are converted into neutral particles by neutralisation on their related electrodes which again form a new molecule or compound. Example 1. Electrolysis of Aqueous HCl Fig. 3.2 is used to explain mechanism of electrolysis in which dil. HCl solution is present. In this, two electrodes of platinum are connected with an electric source (battery).

→ Electrode connected with positive terminal of battery is called anode and electrode connected with negative terminal is called cathode. Anions are discharged at anode and cations are discharged at cathode. Hydrogen ions move towards cathode and chloride ions move towards anode on establishing circuit. Following type of reduction reaction takes place at cathode :
At cathode: H+ + e– → H2(Reduction) 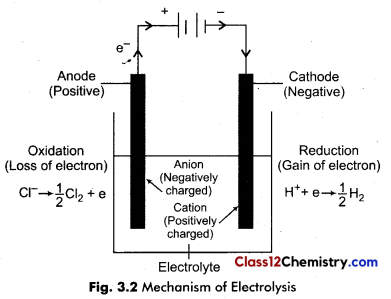 → It is clear that electrons move from anode to cathode (opposite in direction of flow of electric current) in external circuit for completing the circuit and ions move towards oppositely charged electrodes. In this process, oxidation-reduction process takes place with electric conduction. Chlorine gas is evolved from anode and hydrogen gas is evolved at cathode. Electrolyte remains electrically neutral at each moment because both ions are discharged together.

This process continues till:

→ During electrolysis, Na+ ions are attracted towards cathode and Cl– ions are attracted towards anode. Here clo gives one electron to anode and converts into chlorine atom. Since chlorine atoms are unstable. So, these form chlorine molecules on combining in pairs.. Na+ ions move towards cathode and convert into sodium metal by taking an electron from each cathode.

Reactions can be expressed as follows:

Sodium chloride is ionized in water as follows:

→ Hence, the aqueous solution of sodium chloride contains Na+, H+, OH– and Cl– ions. When electric current is passed in solution then Na+, H+ ions move towards cathode and OH–, Cl– ions move towards anode. Here, is competition for reduction between Na+ and H+ and the ion whose ionization potential is more, will reduce first. Since reduction potential of H+ is high so it will reduce and H2 gas will be obtained.