→ The half-cell of that Galvanic cell in which oxidation takes place is called anode and its potential related to solution is negative. Second half-cell in which reduction takes place, is called cathode and its potential related to soution is positive. So, a potential difference is present between both electrodes and as switch is ON-position electrons flow from negative electrode to positive electrode.

→ Here, the direction of flow of electric current is opposite to that of direction of flow of electrons. Thus, the difference in electrode potential between both electrodes of a electro-chemical cell is called electromotive force or e.m.f. or cell potential. It is measured in volt. At this time, no current flows in the cell. During writing of Galvanic cell, write anode at left side and cathode at right side. 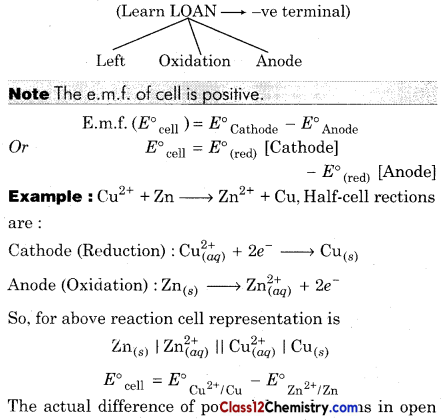 Note The e.m.f. of cell is positive.

So, if 1 joule work has done for flowing of 1 coulomb charge in circuit then the cell potential or emf is 1 volt.