→ Those apparatus or cells or electro-chemical devices by which we convert chemical energy into electric energy, are called Galvanic or voltaic or electrochemical cells. These were first discovered by L. Galvani and A. Volta. So, these were named as Galvanic or Voltaic cell on their names.

→ Here, the saturated solution of inert electrolyte is generally formed in gelatin. U-tube is made up of glass. Both open ends of U-tube are closed by a porous substance like glass wool or cotton. It is found on completion of circuit by pressing key in circuit that electric current is passed through the circuit, which can be seen in ammeter. 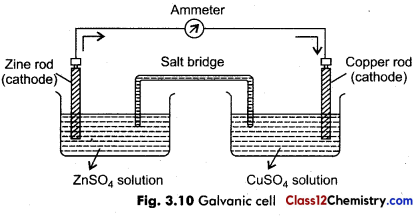 → Following observations are seen during the reaction:

→ When electrons are released from zinc electrode then these move towards Cu electrode. Here, Cu2+ ions of CuSO4 solution accept these electrons and liberated at Cu rod on reduction.
Cu2+ + 2e2- → Cu (Reduction)