→ Dioxygen is the most abundant element in the earth’s crust (46.5%). Karl Scheele was the first to prepare it by heating mercuric oxide in 1772. Later on Joseph Priestly also prepared it.

→ Lavosier first time named it oxypen for = acid. gennas-maker). In atmosphere, dioxygen (O2)is nearly 216 by volume and the rest is dinitrogen.

Dioxygen can be prepared as shown below:

By heating the Salts Containing Oxygen :

The salts containing oxygen when heated strongly dioxygen is evolved. 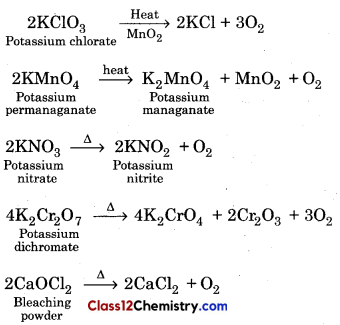 Laboratory Method : In laboratory, dioxygen gas can be prepared by thermal decomposition of potassium chlorate. 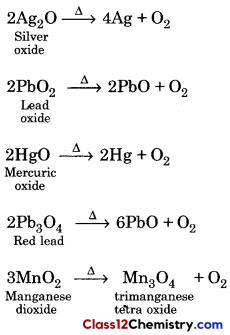 By decomposition of Peroxide : Hydrogen peroxide is decomposed easily in presence of finely divided metals or manganese dioxide 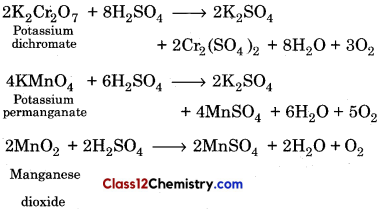 → Industrial Preparation : Industrially dioxygen can be prepared by the following two methods: ) By electrolysis of water On clectrolysis of aedified water, using platinum electrodes or alkaline water using nickel electrode, dioxygen as is liberated at anode.

→ By liquid air: First of all carbon dioxide and water vapours are removed from air then rest of the gases are liquified under high pressure and low temperature. This liquid air is now subjected to distillation then liquid dinitrogen (b.p. 77.2 K) distilled out first, leaving behind liquid oxygen (b.p.90 K). Now this liquid oxygen is recovered.

From Sodium Peroxide Dioxygen can be prepared in laboratory by the action of water on sodium peroxide.

Dioxygen can also be prepared by the action of acidified potassium permanagate on sodium peroxide.

Its physical and chemical properties are as follows:

Some important chemical properties are as follows:

Action of Litmus Dioxygen is neutral to litmus.
Reaction with Metals except some metals like Ag, Au, Pt, it reacts with all other metals to for respective oxides. For examples,

Reaction with carbon, nitrogen and phosphorus

Reactions with compounds : Dioxygen oxidises a variety of compounds. Some important actions are & follows

Reaction with aminonia as : Dioxygen axidises ammonia to nitrie oxide in the presence of platinum gauze catalyst at 1100 K.

With hydrogen chloride Dioxygen reacts with HCl in presence of cuprie chloride catalyst at 700 K.

With sulphur dioxide: In presence of oxygen SO2 la oxidised into SO2 at 728 K in the presence of V2O5 or finely divided platinum.

With carbon monooxide: Carbon monoxide when oxidised with oxygen then carbon dioxide is formed

Oxidation Reaction. If hydrocarbona are oxidised in presence of catalyst, different products are formed. Here the oxidation is done in limited amount of oxygen