→ The main points of the theory are:

→ The attractive forces arise due to the positive metal ion and negatively charged ligands or the negative end of a polar neutral molecules. These attraction forces bind the ligands to the metal ion i.e.,the bond between metal and the surrounding ligands are purely ionic.

→ In a free transition metal atom or ion, there are five d-orbitals which are divided into two sets depending on the nature of their orientation in space. The three d-orbitals (dxy, dxyz, dzx) which orient in the regions between the co-ordinate axes are designated as t2g orbitals. The other two d-orbitals (\(d_{x^{2}-y^{2}}\), \(d_{z^{2}}\)) which orient along the axes are called eg orbitals.

→ This is called crystal field splitting. It is the basis of CFT. The extent of splitting depends on the number of ligands, nature of ligands. The splitting is different in different structures with different coordination numbers.

Splitting of d-orbitals in Octahedral Complexes 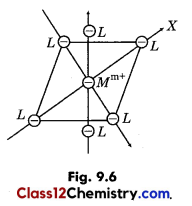 → Since the lobes of two eg orbitals lie in the path of approaching ligand, the electron in these orbitals experience greater force of repulsion than those in t2g orbitals whose lobes are directed in space between the path of the ligands i.e., energy of t2g and eg orbitals is increased by different magnitude.

→ For any given metal ion, the magnitude of CFSE depend on the nature of the ligands. The ligands which affect only a small degree of CFSE are termed weak field liganda while those which affect a large splitting are called strong field ligand.

→ When the ligands are arranged in order of magnitude of crystal field splitting, energy the arrangement thus obtained is called spectrochemical series :

→ Distribution of d-electrons in t2g and eg orbitals in octahedral complexes : Distribution takes place on the basis of nature of ligands. Two cases may arise :

→ When the ligands are weak: Under the influence of weak ligand, CFSE is relatively small than P (pairing energy which is energy required to pair two electron in the same orbital) and hence all the five d-orbitals may be supposed to be degenerate and the distribution of electrons in tax and eg sets according to Hund’s rule. This can be shown as:

→ When the ligands are strong: Under the influence of strong ligand, CFSE is relatively higher than P and thus the distribution of d-electrons in lze and eg sets does not obey Hund’s rule. This can be shown as:

The above points are summerized in following table : 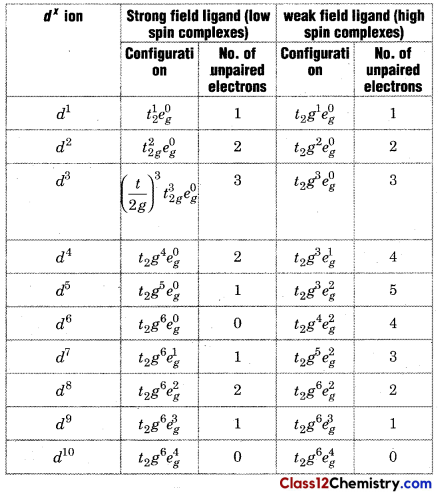 Splitting of d-orbitals in Tetrahedral Complex

→ During the formation of tetrahedral complexes, t2g orbitals are closed to the approaching ligands. As a result of this, the t2g orbitals suffer more repulsion than eg orbitals thus splitting occur in following way:

It is observed that ∆t (CFSE in tetrahedral complex) is considerably less than ∆0. It has been found that

→ Under the influence of strong or weak ligand, CFSE is relatively small than P and hence all the five d-orbitals may be supposed to be degenerate and the distribution of electrons in t2g and eg sets according to Hund’s rule. This can be shown as:

Cause of Colour According to CFT

→ A complex shows colour because it absorbs light at a specific wavelength in the visible part of the electromagnetic spectrum and transmits the rest of the wavelength which representa a particular colour. The absorption of light is arises from the excitation of electrons from the d-orbitals of lower energy to the d-orbital of higher energy i.e. d-d-transition of electron is main cause of colour which is based on the splitting of d-orbitals.

→ In coordinate compounds colour occurs due to d-d transitions. During these transitions, when electron falls to t2g from eg orbital energy released in form of coloured photon. 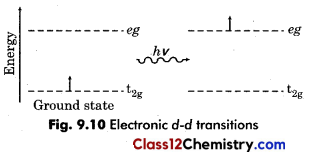