Crushing and Grinding of Ores or Pulverisation of Ores Chemistry Notes

Crushing and Grinding of Ores or Pulverisation of Ores :

The ores generally occur in nature in the form of huge lumps. These lumps are broken into small pieces with the help of grinders or crushers so that the chemical changes which have to take place later on may become convenient. This process is called crushing, which is done by jaw crushers. These small pieces are further pulverised into fine powder in stamp millor ball mill. 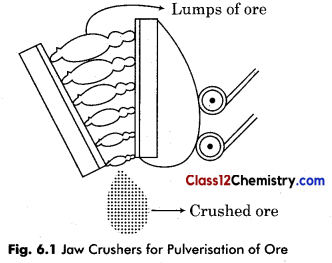 Concentration or Benefication or Ore-dressing :

→ As we know that the ores are associated or contaminated with earthy or silicious impurities. These impurities are known as gangue or matrix. These impurities are removed from pulverised ore by concentration so that they can not cause any interference in the extraction of metals. The removal of gangue or matrix from pulverised ore is known as concentration or benefication or ore-dressing. It can be done by various methods given below: 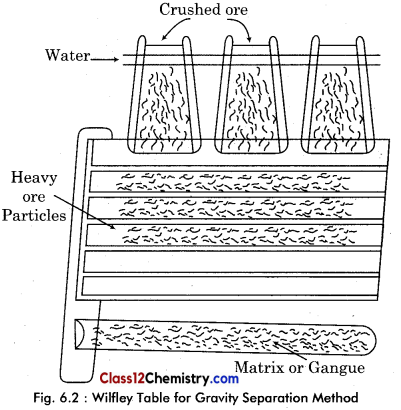 → Magnetic Separation Method : This method is used to concentrate those ores where either the ore or the gangue have magnetic properties. If either ore or the gangue is capable of being attracted by a magnetic field. In this method, a magnetic separater is used, which has a belt moving on two rollers. In these rollers one is magnetic while the other is non-magnetic. When powdered ore is dropped over the belt from one end which is non-magnetic then moving belt taken away this powdered ore.

→ Example : With the help of this method, chromite ore (FeO . Cr2O3) is separated from gangue, wolframite (FeWO4) which is magnetic, is separated from one-magnetic cassiterite (SnO2), magnetic oxide (Fe3O4) of iron is concentrated by this method. Beside these tungstates, haematite (Fe2O3), pyrolusite (MnO2), ilmenite (FeTiO3 etc. are also concentrated by magnetic separation method. 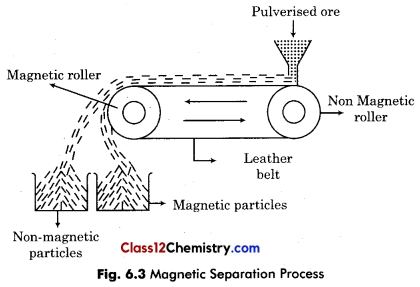 → Method : In this method, the powdered ore is mixed with water to make a suspension in a tank. To this suspension some amount of collectors and froth stabilizers are added. A vigorous stream of air is now passed through the suspension with the help of air condensor. By this stream of air the contents are agitated, and as a result of agitation the froth is produced. With this froth the ore particles are wetted and carried to the surface by the foam.

→ While the gangue particles are wetted by water hence sinks to the bottom of the tank. The froth with lighter ore particles float at the surface of suspension hence this process is called froth floatation process. Now this froth is skimmed off from the surface and transferred into another tank where it is washed with water to recover the particles. 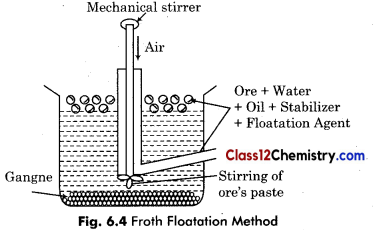 In this method, some reagents are also used.

These reagents are as follows:

→ Collector or Floating Agent : These reagents increase the non-wettability of the mineral particles. Examples : Potassium or sodium ethyl xanthates

Froth stabilizers : They help in stabilizing the forth. Examples: Cresol, aniline etc.

→ Activators : Sometimes activators are used to activate the process of collector by removing the water particles from its surface. So that ore particles can easily be wetted by oil. Examples: Sodium sulphide, cupric ions,

→ Depressants : Depressants are used when more than one sulphide ores are to be concentrated. The depressant prevents one type of sulphide ore particles from forming the froth with air bubbles. For example, NaCN is used as a depressant to separate lead sulphide (PbS) ore from zinc sulphide (Zn) ore. The reason is that NaCN forms a zinc complex, Na2 [Zn(CN), ) on the surface of ZnS thereby preventing it from the formation of the froth. Under these conditions, only Pbs forms froth and therefore, it can be separated from ZnS ore.

→ Leaching or Chemical Separation Method : It is a type of chemical separation. It involves the treatment of the ore particles with suitable chemical like acids, bases or other suitable reagents as to make it soluble while impurities remain insoluble in the form of sludge. The insoluble impurities are separated by filteration and the ore is recovered by precipitation or crystallisation. The following examples illustrate the process of leaching:

→ Leaching of alumina from bauxite ore (Baeyer’s Process) Bauxite, the principle ore of aluminium contains ferric oxide (Fe2O3), titanium oxide (TiO2) and silica (SiO2) as impurities. The pulverised bauxite ore is concentrated by digesting it with aqueous solution (45%) of caustic soda (NaOH) at about 473-523 K temperature and 35-36 bar pressure. Then the alumina dissolves in solution forming soluble sodium aluminate and silica (SiO2) also dissolves in solution as sodium silicate.

→ Now hydrated alumina or the precipitate of aluminium hydroxide is filtered, dried and heated strongly upto 1470 K temperature to get pure alumina.

This process is known as Baeyer’s process.

Alternative Method : In this method, CO2 gas is passed in the filterate of sodium meta aluminate and hydrated Al2O3 is precipitated. The solution is seeded with freshly prepared hydrated Al2O3 which induced the precipitation.

Hydrated alumina is filtered, dried and heated to give back pure anhydrous Al2O3.

→ Hall’s Method: When Fe2O3 is present in the form of main impurity (large in amount) in bauxite ore then this method is used for leaching, In this method, bauxite is fused with Na2CO3 by which sodium meta aluminate is obtained and further pure alumina is obtained.

Serpeck’s Method: This method is useful when SiO2 is main impurity (in large amount) in bauxite ore. In this when bauxite ore is heated with coke and N2, aluminium nitride is obtained which on hydrolysis form aluminium hydroxide. On heating, it forms anhydrous Al2O3. Silica is reduced to Si by coke, which is separated due to its volatile nature.

→ Leaching of Silver and Gold (Cyanide Process) : This process is useful in the extraction of gold and silver from their native ores or silver from argentite ore (Ag2S). This process is also known as cyanide process or Mac-Arthur Forest Cyanide process. In this process, the pulverised argentite ore or native silver or native gold particles are treated with dilute solution (0.5%) of potassium or sodium cyanide.

A current of air is also circulated continuously through the solution. Then silver or gold dissolves in solution forming a soluble complex while the insoluble impurities remains in solution which are filtered off. 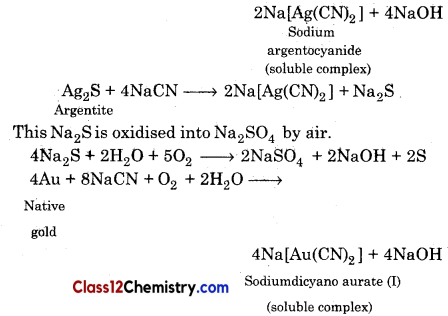 From the solution, the metal is recovered by the treatment of highly electropositive metal zinc by displacement method. 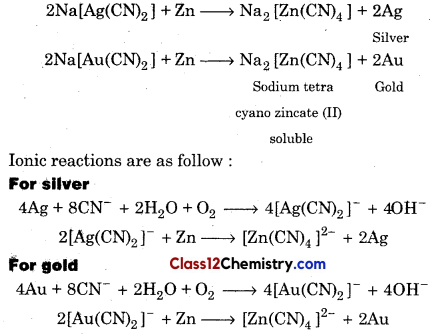 → In this process of leaching of Ag and Au metals, first of all oxidation of metal occurs and then they are replaced by zinc metal which is a strong reducing agent. This whole process completes according to the principle of oxidation-reduction. This method is also known as hydrontetallurgy because in this method metal is precipitated from the aqueous solution of metal complex. This process is also known as cyanide process because in the initial step formation of cyanide complex takes place.