→ When metals come in contact with atmosphere then gases and water vapour present in atmosphere attack at the surface of metals and some undesired compounds like metal oxide, carbonates, sulphides, sulphates etc., are formed. This process is known as corrosion.

→ “The process in which oxides, carbonates, sulphides, sulphates etc., are formed by attack of atmospheric gases or water vapour on the surface of metals and metal corroded slowly, then this process is called corrosion.”

It is of following four types:

→ We can explain electrochemical theory of corrosion by example of rusting of iron. Oxygen and CO2 gas of atmosphere dissolved in water drops present at the surface of iron metal.
CO2 + H2O → H2CO3

→ Here, impure iron acts as cathode and pure iron acts as anode and aqueous solution present at surface in which O2 and CO2 are dissolved, acts as electrolyte. So; an electrochemical cell is formed at the surface of iron. The reactions take place in cell are as follows: 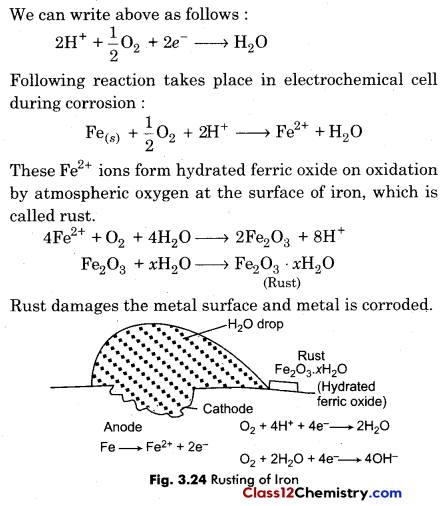 Methods of Prevention of Corrosion :

Barrier Protection It is simplest method for protection of corrosion. In this method, iron surface can not in contact with atmospheric moisture, oxygen and CO2.

We can use following methods for barrier protection :

→ Its best example is galvanization, In this method, a thin layer of zine covers the surface of iron which protects rusting of iron. Since, zinc is placed above in electrochemical series. So, its oxidation takes place first and zinc is disintegrated and iron is protected.

→ Cathodic or Electrical Protection When underground iron pipes or tanks are used then we protect them from corrosion by this method. In this method, the bridges of pipe or tank or water etc., are attached with a block of more electropositive metals like Mg, Al, Zn etc. This metal block acts as anode and loses electrons.

→ The electrons obtained from anode move to cathode where the iron ions react with these electrons to convert into iron metal again and so here iron protects from corrosion. More electropositive metals are changed time to time so that iron is protected.

→ By Anti-rust Solution-Alkaline sodium phosphate and chromate solution act as anti-rust solutions. When iron metal objects are dipped in boiled phosphate solution then an invisible thin protective layer is formed on objects which protects iron from corrosion.