→ Consider a simple hydrocarbon ethane, the free rotation of one carbon with respect to another gives rise to various arrangements of the atoms differing in relative positions of hydrogen atoms attached to these carbon atoms. These different spatial arrangements of atoms in space resulting due to free rotation around a single bond are called conformation or conformers or rotamers.

→ In a Newman projection formula, the molecule is viewed along an axis containing two atoms bonded to each other and the bond between them, about which the molecule can rotate. In a Newman projection formula, the “substituents” of each atom composing the bond, be the hydrogens or functional groups. can then be viewed both in front of and behind the carbon-carbon bond.

→ The other extreme occurs when the hydrogens on the first carbon are as far away as possible from those on the second carbon; this occurs at a dihedral angle of 60° and is called the staggered conformation.

→ In staggered form of ethane, the electron clouds of carbon-hydrogen bonds are as far apart as possible. Thus, there are minimum repulsive forces, minimum energy and maximum stability of the molecule. In eclipsed conformation, the C—H bonds on the front and back carbons are aligned with each other with dihedral angles as 0°.

→ The eclipsed conformation of ethane has three such C—H eclipsing interactions, so one can infer that each eclipsed C—H ‘costs’ roughly 4.2 kJ mol-1 (1 kcallmol). Eclipsing interactions are an example of a general phenomenon called steric hindrance, which occurs whenever bulky portions of a molecule repel other parts of the same molecule. Because such hindrance causes resistance to rotation, it is also called torsional (or Pitzer) strain. 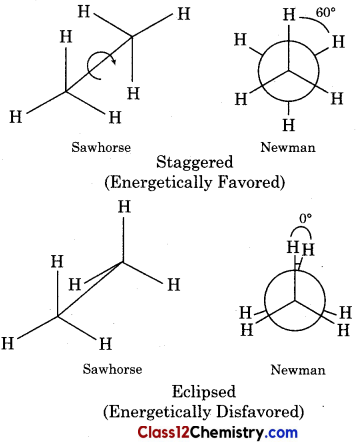 → Magnitude of torsional strain depends upon the angle of rotation about C—C bond. This angle is also called dihedral angle or torsional angle. Among all the conformations of thane, the staggered form has the least torsional strain and the eclipsed form has maximum torsional strain. Thus it may be inferred that rotation around C—C bond in ethane is not completely free. The energy difference between the two extreme forms is of the order of 12.5 kJ mol-1 ,which is very small.

→ Even at ordinary temperature, the ethane molecule gains thermal or kinetic energy sufficient enough to overcome this energy barrier of 12.5 kJ mol-1 through intermolecular collision. 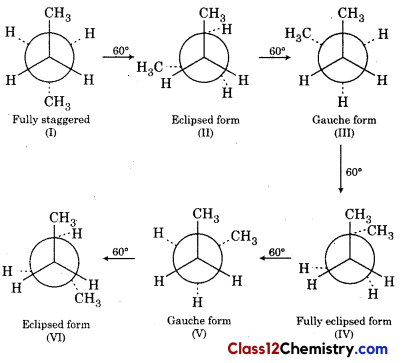 → Conformation In Cyclic System : In this series, we can take the example of cyclohexane. In cyclohexane, all the carbons are sp3 hybridised and thus configured at an angle of 109.28’. Therefore, it should not have planar hexagonal shape. Infact, cyclohexane exist, either in the shape of chair or boat. in 1918, Mohr suggested that cyclohexane can exist in two forms chair and boat form and the energy difference between the two forms is 6-7 kcallmol.

→ Hence these forms can be intercoverted at room temperature. The chair conformation is the most stable conformation. Chair form is free from torsion strain. In the chair conformer of cyclohexane, all the bond angles are 1110, which is very close, the ideal tetrahedral bond angle of 109.5°, and all the adjacent bonds are staggered.

→ The boat conformer is further destablized by the close proximity of the flagpole hydrogens (the hydrogens at the “bow” and “stern” of the boat), which causes steric strain. Torsional strain and flagpole interactions cause boat conformation to have considerably higher energy than chair conformation. The chair form is more stable than the boat form by 44 kJ mol-1. 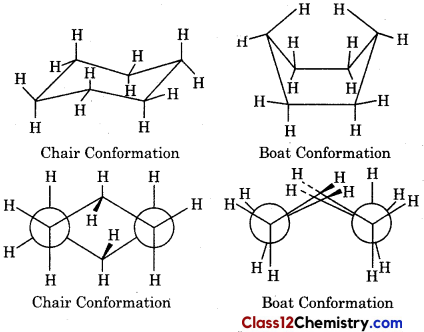 Newman’s Representation of Chair and Boat form of Cyclohexane.

→ There are six of these, three upward and three downward bonds, and they alternate up/downlup, etc., around the ring. The other six bonds which radiate away from the “equator” of the ring, are called equatorial hydrogeñ atoms (Heq). There are six of them, three of which are “slant up” and three of which are “slant down”, again alternating around the ring. 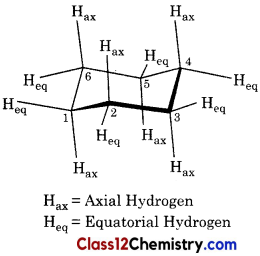