→ Close-Packing in One Dimension A number of solid spheres of same size are arranged and placed side by side in a row. In this arrangement, each sphere is in contact with two neighbouring spheres, which is its coordination number. Thus, it is clear that the coordination number in one-dimensional close packing is two.

Note: Coordination Number: The number of touching neighbouring spheres of one particle is called its coordination number

It is of two types :

→ Square Close Packing : In this type of close packing, the second row of particles is so arranged in contact with first row that the spheres of second row are exactly above the spheres of first row and spheres of both rows are arranged horizontally as well as vertically. Here, each sphere remains in contact with four neighboring spheres. So, its coordination number is 4.It is called square close packing or also called AAAA type of arrangement. (figure 1.27) 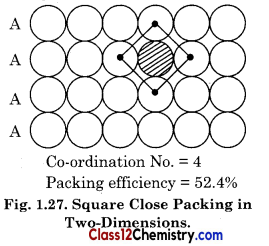 → Hexagonal Close Packing : In this type of close packing, the second row of particles is so placed in contact with first row that the spheres of second row come in depressions of spheres of first row. In this arrangement, free space is less and this type of packing is more efficient than square close packing. Here, each sphere remains in contact with six neighbouring spheres.

→ So the coordination number of two-dimensional hexagonal close packing is 6. This is also called ABAB type of arrangement. Here, some empty spaces or voids are found at surface whose shape is triangular. These triangular voids are of two types i.e., horizontally (in one row) and vertically (in other row). (figure 1.28) 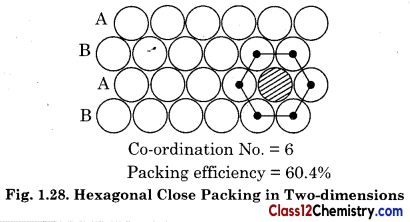 → Three dimensional structure can be obtained by placing two dimensional layers one over the other. These are of following types

→ Here, the layers of two dimensional square close packing are so arranged one over the other that spheres come one above the other and spheres of all layers one arranged in straight line horizontally and vertically. Such type of formed lattice is simple cubic lattice and its unit cell is primitive cubic unit cell (Figure 1.29) 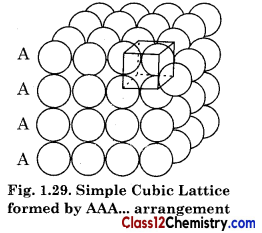 → Interstitial void : Constituent particles are closely packed in solids and minimum empty space is found between them. This empty space is called void. Voids are of two types (a) Tetrahedral void : It is formed due to combination of centres of four spheres. It is represented in figure 1.30 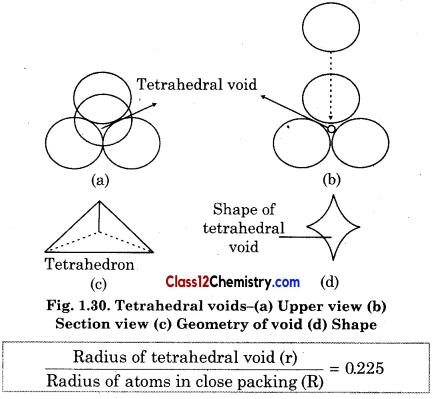 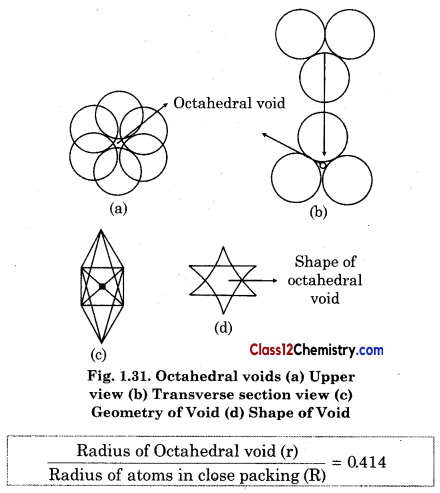 → The arrangement of a tetrahedral and octahedral voids can be represented by the following figure 1.32 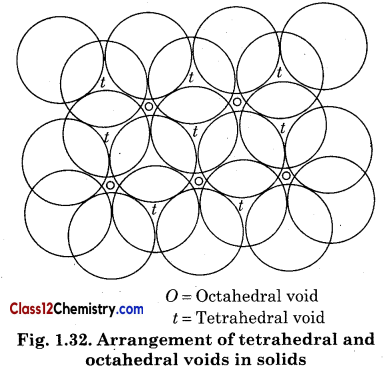 → Placing Third Layer Over Second Layer There are two possibilities in this arrangement (i) Covering of Tetrahedral voids or Hexagonal Close Packing (hcp) In this position, the spheres of third layer are verically aligned with spheres of first layer and the spheres of fourth layer are vertically aligned with sphere of second layers. So, the pattern of spheres is repeated in uniform manner. It is called ABAB… pattern. Here, the coordination number is 12 and packing efficiency is 74%. This arrangement is found in magnesium and zinc (fig 1.33) 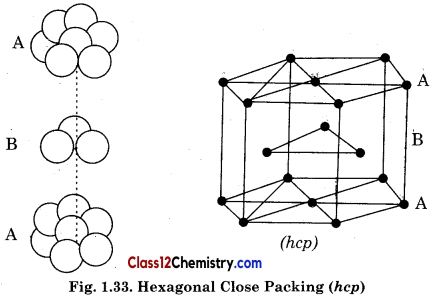 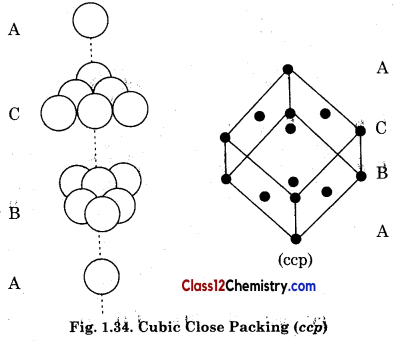