Solid substances can be classified into following four classes which depend on the nature of inter-molecular or inter-ionic forces between their constituent particles:

Molecules are constituent particles of these solids which are held together by weak van der Waals forces or hydrogen bonding. Their melting and boiling points are low and exists as molecules in each state. These are further classified into three classes:

→ In this category, constituent particles are either atoms or non-polar molecules (inert gases) which are held together by weak dispersion forces or London forces. These are soft and non-conductor of electricity. They have low melting points.

→ Examples: solid argon, solid helium, solid H2, solid Cl2, solid I2, solid CO2 (dry ice), CCl4, BH3, etc. These are generally found in liquid or gaseous state at room temperature and pressure. But some solids among these like iodine, naphthalene etc. are solids due to large molecular sizes. These are highly volatile and are insoluble in polar solvents like water. These are generally found in solid state at low temperatures.

→ They get solidify at very high pressure and low temperature. The molecules of such type of solids are polar. They have relatively strong dipole-dipole interactions. These are also soft and non-conductor of electricity. Their melting points are higher than non-polar molecular solids yet these are found in gas or liquid state at room temperature and pressure.

→ But can be obtained in solid state at low temperature. These are soluble in polar solvent like water and their aqueous solutions is conductor of electricity. Examples Solid SO2, Solid NH3, Solid HCl, Solid HBr etc.

→ In these solids, constituent particles are such molecules which contain hydrogen atom linked to a highly electronegative atom which are small in size like F, O and N for example : H-F, H2O, NH3, etc. At low temperatures, these exists as solids. Strong hydrogen bonds exist in molecules of such type of solids. These are non-conductor of electricity and generally liquids or soft solids at room temperature and normal pressure. Examples: H2O (ice), solid NH3, solid C2,H5,OH etc.

→ These are hard solids having high melting and boiling points. These are formed by positive and negative ions i.e. cations and anions which are arranged in space three dimensionally by strong coulombic (electrostatic) forces. These solids are hard and brittle. They are electrical insulators in the solid state because their ions are not free to move about.

However, in the aqueous solution or in molten state, they are good conductors of electricity because ions become free. They form crystal lattice. For example NaCl, KCl, KNO3, etc. Ionic solid are also crystalline solids. The stricture of NaCl is represented in figure 1.2. Here Na+ and Cl– ions are held together by strong electrostatic forces of attraction. 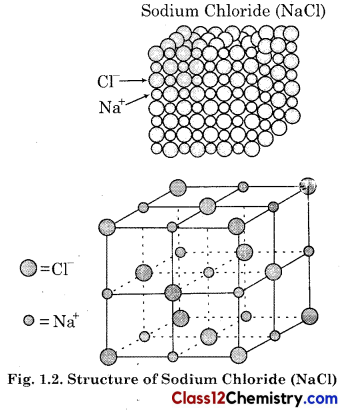 These solids are orderly collection of positive ions (kernels) surrounded by and held together by a sea of free electrons. all inner shells and nucleus of the atom except outermost shell is called kernel (fig 1.3) in metallic solid kernel occupies the fixed position while the space between them are covered by free electrons. 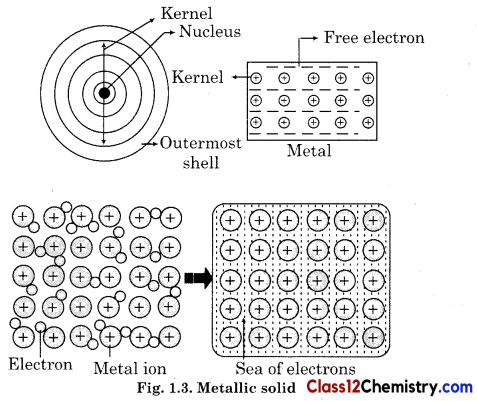 → These free and mobile electrons are responsible for high electrical and thermal conductivity of metals when an electric field is applied, these electrons flow through network of positive ions. Also heat given to one part is carried by These free electrons to all parts of metal.
Examples : Mg, Na, Fe, Cd, Ag, Au etc.

→ They have very high melting point and some solid can also decompose even before reaching its melting point. These are non-conductors. Examples: diamond, silicon carbide (SiC), AIN etc. The structures of diamond and graphite are represented in figure 1.4. 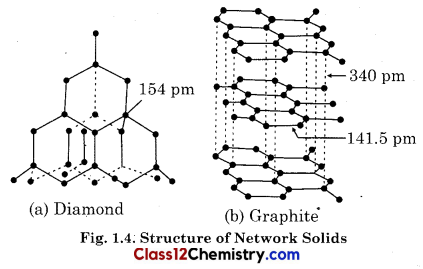 → Graphite is also a covalent solid but it is soft and a good conductor of electricity. This exceptional behaviour is due to its structure. In graphite, carbon atoms are arranged in layers, in which each carbon is attached to three neighbouring carbon atoms. Thus, fourth electron is free which conducts electricity. Also, these layers can slip over each other. Due to this, graphite is used as lubricant.