Classification of Polymers Preparation and Properties

Polymers are classified on the basis of different criteria as follows.

Classification of Polymers Based on surce/Origin

Polymers are broadly divided into the following three classes.

→ Natural Polymers : These polymers are found in plants and animals and are called natural polymers. Proteins which make starch much of our body, rubber which is used for making articals all natural polymers.

Some important examples of natural polymer are as follow:

→ Semi-synthetic polymers : These are derived from naturally occuring polymers by some chemical methods, For example, cellulose on acetylation with acetic acid in presence of co nc. H2SO4 gives cellulose diacetate which is used for making threads of acetate rayon here cellulose is a natural polymer. Other example of its is cellulose nitrate (Gun cotton). Vulcanised rubber, cellophane lether etc.

On the basis of types of monomers, polymers are classified, into two class as follow:

→ Copolymers : When a polymer is formed from more than one kind of monomer unit, then it is known as copolymers.
Example : Nyton-6, 6 is copoymer, it is formed by polymerisation of hexamethylene diamine and adipic acid. 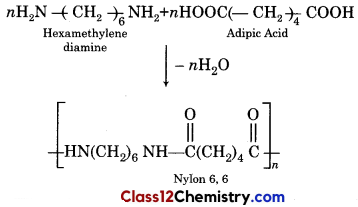 Classification of Polymers the basis of types of Polymerisation

In 1929 Carothers classified polymers on the basis of polymerisation process as follow:

→ But some polymers cannot be classified into these two types of groups. Then in 1950 HF. Mark classified polymers on the basis of mechemism of polymerisation as follow.

→ Addition Polymer : The polymer which are formed by repeated addition of monomers to the polymer chain.

→ The monomers are unsaturated compounds and commonly derivetives of ethene. The addition polymers have same empixica] formula as the monomers. This type of polymer is known as homopolymers. For example polyethene, polybropene, polystyrene etc. 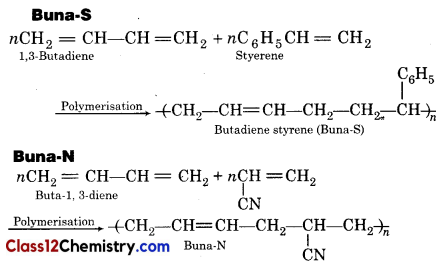 Classification of polymers on the basis of structures

→ Classification based upon structure : On the basis of structure of polymers can be classified as:

→ Linear polymers : These are polymers in which monomeric unit are linked together to form linear chain. These linear polymer are well packed and have high mangnitude of intermolecular forces of attraction and therefore have high densites, high tensite (pulling) strength and high melting points. Some common example of linear polymers are high density polyethene, nylon, polyester, PVC, PAN etc. it can be represented as:

→ Branched chain polymers : These are polymers in which the monomers are joined to form long chain with side chains or branches of different lengths. These branched chains polymers are irregularly packed and therefore, they have low tensie strength, low density, boiling point and melting points than linear polymer. Some common examples are low density polyethene, glycogen, starch etc. It can be represented as :

→ Cross-linked polymers : These are polymers in which monomer units are cross-linked together to form three dimensional network polymers. These polymers are hard rigid, and bittle because of network structure e.g. Bakelite melamine formaldehyde resin etc. it can be represented as:

Classification on the basis of Behaviour of Polymers towords temperature

On this basis of it polymers are classified intci two classes.

→ Thermoplastic Polymers : These are the linear or slightly branched long chain molecules capable of repeatedly softening on heating and hardening on cooling. These polymers possess intermolecular forces of attraction intermediate between elastomers and fibres.

→ Thermosetting Polymers : Usually thermosetting polymer can be heated only once when it permanently sets into a solid which cannot be remelted and remoulded. Thermosetting polymers are produced from relatively low molecular mass semi fluid polymers (called polymers) which on heating develop extensive cross-linking by themselves or by adding some cross-linking agents and become infusible and insoluble hard mass. The cross links hold the molecules in place so that heating does not allow them to move freely.

→ Therefore, a thermosetting plastic is cross linked and is permanently rigid. The common example are Bakelite, Melamine Formaldehyde Resin, etc.

Classification of Polymers on the basis of Molecular forces

→ Many application of polymers in different fields depend on their unique mechanical properties like tensile strength, elasticity, toughness etc. These mechanical properties are governed by intermolecular forces, e.g. vander Waals forces and hydrogen bonds present in the polymer. Under this category, the polymers are classified into the following four sub groups on the basis of magnitude of intermolecular force present in them.

→ Elastomers : The polymers in which polymer chain are held together by the weakest intermolecular forces. These weak forces permit the polymer to be stretched. A few ‘cross-links’ are introduced in between the chain which help the polymer to retract to its original position after the force is released. For example : Elasticity of rubber is inoreased on vulcanization of it with sulphur.

→ Hence vulcanised rubber is more elastic in comparision to natural rubber. Other examples of this group are Buna-S, Buna-N, neoprene etc.

→ Fibres : The polymers which are used for making fibre having high tensile strength and high modulus.

→ There are strong intermolecular forcess of attraction like hydrogen bonding, e.g. in nylon 6,6. these strong forces also lead to close packing of chain and thus, impart crystalline nature. These polymers have sharp melting points. These are qenerally known as threads.

the summary of polymers are presented in table 15.2.