→ The first isolated halogen, was discovered by Scheele in 1774. He discovered it by the action of HCl on MnO2. In 1810. Davy described its elementary nature and he suggested the name chlorine on behalf of its colour.

→ Chlorine is a Greek word taken from chlorous meaning yellowish green. In 1785, Berthollet put its technical use. Chlorine is widely distributed in the form of chlorides of different metals in nature. One of the common example of it is common salt (NaCl).

Chlorine is highly reactive no it does not occur in native state. About 0.19% part of lithosphere is constituted by it. In nature it occurs mainly in the form of chlorides of sodium and other alkali as well as alkaline earth metals. The most abundant compound of chlorine is common salt (NaCl). NaCl is found in saline Inkes, brines, oceans etc. Other minerals of chlorine Are Carnallite (KCl. MgCl2 . 6H2O), Sylvine (KCl) etc.

Some important method of preparations of chlorine are as follows:

→ If manganese dioxide is heated with common salt and concentrated H2 SO4 then chlorine is prepared.

By lead oxides. When lead oxide reacts with hydrochloric acid then chlorine gas is formed.

→ By Bleaching Powder By the action of HCl on bleaching powder chlorine is formed:

Commercial manufacturing of chlorine i Commercially chlorine gas can be manufactured by the following process:

→ Deacon’s process: In this procesa hydrochloric acid is oxidised by atmospheric air in the presence of Cuci, catalyst at 723 K temperature.

→ The above method is now modified by using improved catalvat Cuci with didymium oxide as promoter; didymium is old name whose meaning is in’ bere two lanthanoidsie.praseodymium and neodymium is used simultaneously.

→ Electrolytic process: By the electrolysis of brine soulution (sodium chloride solution) chlorine is obtained as by product at anode. 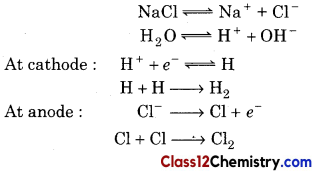 Its important chemical properties are as follows:

→ Action on litmus. There is no effect of dry chkirine on litmus paper but moist chlorine may turn blue litmus red which is due to the presence of HCl and HClO in it.

→ Reaction with water: Since it has great affinity for bydrogen hence it decomposes water in presence of sunlight to produce HCl.

When ammonia is taken in exces, then nitrogen is formed

When chlorine is taken in excess, then nitrogen trichloride is formed.

→ With very active metals like sodium, chlorine etc. it burn in the atmosphere of chlorine to form their chlorides.

→ With less active metals like iron, aluminium, zinc, copper etc it reacts only on heating

Reaction with Alkalies Chlorine reacts with alkalies in different ways.

The above reaction is disproportionate reaction

Reaction with slaked lime: Chlorine reacts with it in two ways

→ Bleaching action : Chlorine can bleach natural colouring material like flowers creen leaves, indigo etc, in presence of water. The bleaching action of chlorine is due to its ability to oxidine coloured material into colourless material. The related reaction is as follows:

→ The bleaching action of chlorine is by oxidation hence it is permanent. Chlorine beaches only in presence of waterthus, dry chlorine cannot bleach dry flowers due to the absence of water. Its bleaching action is harmful because during bleaching hydrochloric acid (HCI) is formed thus, the deliente fibers are likely to be destroyed by HCI. That is why, chlorine la used only for bleaching wood palp, paper pulp and clothes etc. 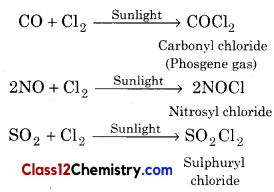 → Reaction with halides: Chlorine can replace less electronegative halogens from their halides

→ As oxidising agent : In presence of moisture chlorine behaves as strong oxidising agent. The yellow colour of chlorine is disappeared due to the formation of HCL and HOCl, HOCl form nascent oxygen which is responsible for the oxidising properties of chlorine.

→ Some important oxidising reactions of Cl2 are as follows:

→ In some reactions chlorine enn lo act as an oxidising agent in absence of water. 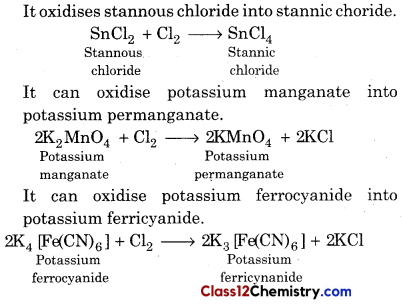