→ Some other anomalous properties of nitrogen are as follows:

→ phophorus, arsenic antimony etc. form tetrahedral molecules (E4) in their elemental state. Because they can not form pπ – pπ multiple bonding due to their large atomic size bonds and exist as discrete tetra-atomic tetrahedral molecules. These molecules have strong forces of attraction and hence exist as solid at room temperature. 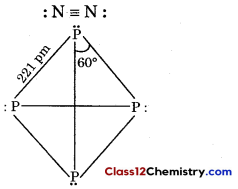