→ Reduction : Reduction takes place in different steps. The final product, however depends upon the reaction medium and nature of the reducing agent. 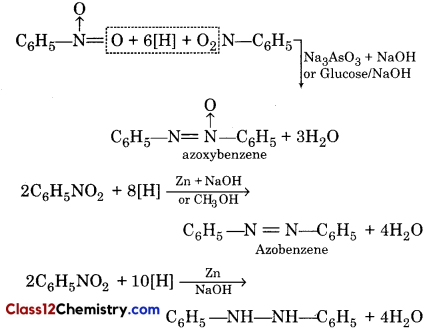 → Electrolytic Reduction : In electrolytic reduction nitrobenzene forms paminophenol by rearrangement in the presence of weak acid or base. 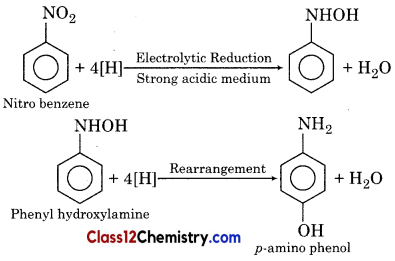 → Selective Reduction : Selective reduction is the reduction of one NO2 group from two group present in compound into NH2.

→ Hydrolysis : Primary nitro alkanes when heated with conc. HCl or 85% H2SO4 then the salt of carboxylic acid and hydroxylamine is formed.

2° nitroalkane when heated with HCl forms ketone and nitrous acid.
3° nitroakane do not hydrolyse.

→ Secondary nitroalkane having α — H reacts with HNO2 and form pseudonitrol whose colour is blue and it is insoluble in base.

→ Halogenation : Primary and secondary nitroalkane having α — H reacts with halogen in presence of NaOH. 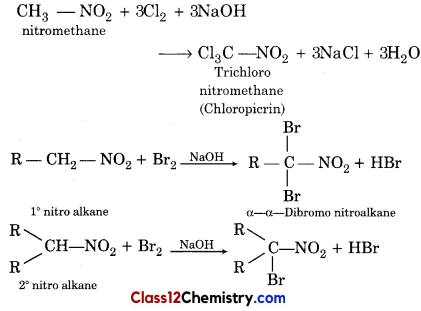 → Electrophilic Substitution Reactions : Nitro group in nitrobenzene is m-directive and deactivating group. Which can be represented in the following resonating structures:

→ Due to —I effect and —M effect of NO2 group, electron density decreass at ortho and para position of ring.

→ That’s why nitrobenzene is less reactive for electrophilic reaction.

→ But electron density is high at m-position so electrophile attacks on mcta position. 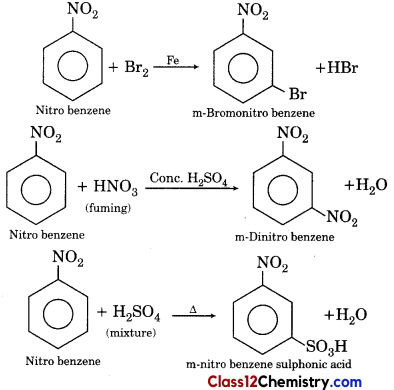