→ Alkanamines are more strongly basic than ammonia due to the electron releasing nature of alkyl group, it pushes electron towards nitrogen and thus makes the unshared electron pair more available for sharing with the proton of the acid.

→ The basic nature of aliphatic amines should increase with increase in the number of alkvl group as +I effect of alkyl groups in tertiary amine is maximum.

So the expected order of basicity of amines is as follows:

→ Tertiary amine > Secondary amine > Primary amine But this order of basicit.y is present only in gaseous phase and non-polar solvent like chiorobenzene. It is clear from pKb values, the correct order of basicity in aqueous solution are as follows:

→ Tn tertiary amines nitrogen atom is surrounded by three large sized alkyl group to a large extent and creates obstacles for incoming electrophiles. This effect is known as steric hinderance.

→ Due to this effect of tertiary amines, density of electrons is maximum on nitrogen, therefore it can not give electron pair to electrophile easily.

→ The main reason for less basicity of aniline is its resonating structures.

→ Above resonating structure shows that electron donating capacity of aniline is very less because nitrogen gives its electron pair to the benzene ring for resonance. Following reactios show the basicity of amines: 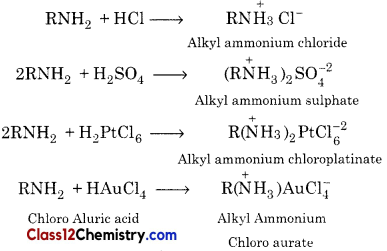 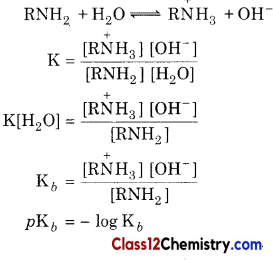 → The higher value of Kb or the smaller the value of pKb more is the basic strength of amine.

→ These reactions of amines are used for identification of metal ions in salts. 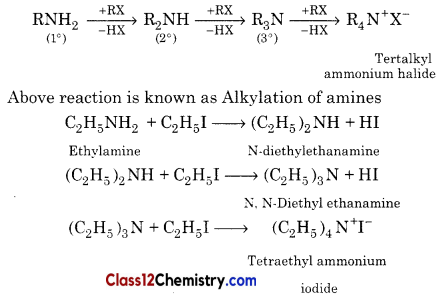 → Aromatic amine also show such type of reactions for example reaction of aniline with excess of methyl iodide gives a mixture of secondary, tertiary and quaternary ammonium salt. 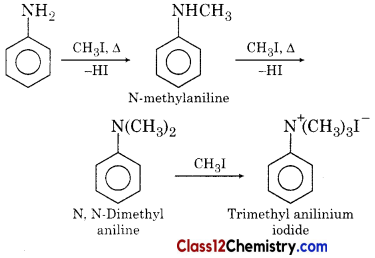 → Acylation : Aliphatic and aromatic primary and secondary amines react with acid chlorides and anhydrides by nucleophilic substitution reaction. This reaction is known as acvlation. In this reaction replacement of hydrogen atom of —NH2, or > N—H group by the acyl group occurs due to which primary and secondary amines reacts with acetyl chloride or acetic anhydride to form N-alkyl acetamide and N, N-Dialkyl acetamide respectively.

→ The products obtained by acylation reaction are known as amides. This reaction is carried out in the presence of a base stronger than the amine, like pyridine which removes HCl so formed and shifts the equilibrium to the right. handside. 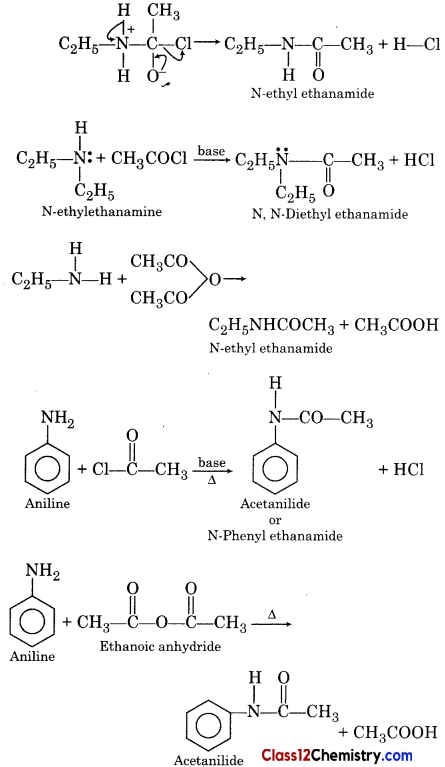 → Tertiary amine do not show this reaction due to the absence of H-atom on nitrogen.

→ Benzolyation : Amine reacts with benzoyl chloride (C6H5COCl) and H-atom of amine is replaced by (—COC6H5) group. This reaction is known as benzoylation.

→ Compounds which contain active hydrogen like alcohol, phenol, amines etc. reacts with benzoyl chloride in the presence of pyridine and this reaction is known as Schotten Baumann reaction.

→ Carbylamine Reaction : Primary amines on heating with chloroform and alcoholic solution of potassium hydroxide form isocyamdes which are foul smelling substances. So this reaction is used for testing of both primary aliphatic amine and aromatic amine. Secondary and tertiary amines do not show this reaction. 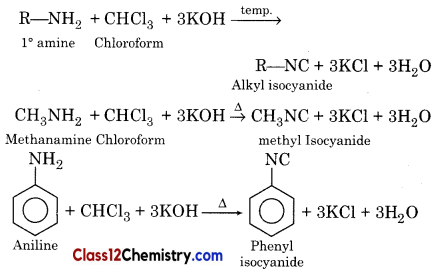 → Reaction with Carbondisulphide : Primary amine reacts with CS2 in the presence of HgCl2 to form isothiocyanates. 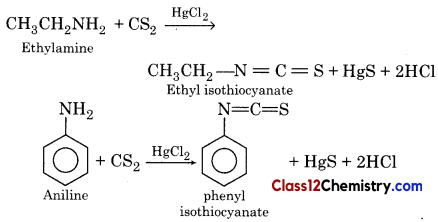 → Secondary aliphatic amines reacts with nitrous acid to form nitrosoamines which are yellow oily substances. They are insoluble in water and can be separated

→ The nitrosoamine when warmed with phenol and sulphuric acid gives a red solution which changes to blue colour on addition of NaOH.

→ This colour change is the best method to test for secondary amines. This is known as Libermann’s nitroso test. 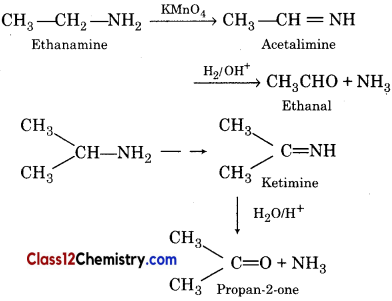 → Secondary amines on oxidation with H2O2 or H2SO5, form N-hydroxylamine after rearrangement.

→ Ascent of Series : Interconversion of lower amines to higher amines

→ Descent of Series : Interconversion of higher amines to lower amines