The reactions shown by alcohols may be divided into following four types :

→ Reactions involving both the alkyl and hydroxyl groups.

→ Due to presence of electron pair oñ oxygen atom of hydroxyl group.

→ Reaactions Involving the cleavage of Bond of Hydroxyl Group

→ This reaction shows that alcohols are acidic in nature. The acidic nature of alcohols is due to electronegative oxygen atom, which withdraws the shared electron pair between O—H towards itself. As a result, O—H bond becomes weak and loses a proton. However, alcohols are weak acids (Ka = 1 × 10-1010 – 10-18) even weaker than water (Kw = 1 × 10-14).

→ In Alcohol O—H group is attached with alkyl group. Alkyl group have +I effect. The alkyl group releases electrons of C—O bond towards oxygen atom and increases electrorr density around it and therefore polarity of O—H bond decreases.

→ As a result, the tendency of oxygen to withdraw electrons in O—H bond towards itself decreases and therefore, the release of proton (H+) becomes difficult. In short we can say that due to +1 effect of alkyl groúp alcohols are weaker acids than water.

Comparision of Acidic Strength of Primary, Secondary and Tertiary Alcohols :

→ In primary alcohols, only one alkyl group is present on the carbon to which —OH group is attached (R—OH). In secondary alcohol two alkyl groups are attached or

→ Alkyl group have electron donating effect. This effect is maximum in tertiary alcohols. Due to this, O—H bond is least polar and release of proton is difficult. Therefore order of acidity in isomeric alcohols is as follows : Primary Alcohol > Secondary Alcohol > Tertiary Alcohol

The basic strength of their alkoxide ions is in reverse order.

→In the presence of strong acids alcohols act as bonsted bases. Hence, they accept proton from strong acids to form protonated alcohols.

→ Reaction with carboxyllc acids : (Esterification) Alcohols react. with carboxylic acids in the presence of conc. H2SO4 or dry HCl gas to form esters.

→ Alcohols are versatile compounds. They behave both as nucleophiles as well as electrophiles.

They behave as nucleophiles in the reactions in which the bond between O—H is broken as shown below :

→ Acylation : When alcohol is treated with acid chloride or anhydride, the hydrogen atom of—OH group is replaced by acyl group (RCO—) forming esters. This reaction is called acylation.

→ If the acid chloride and anhydridé used are acetyl chloride (CH3COCl) and acetic anhydride (CH3CO)2O then this reaction is known as acetylation because here acetyl group (CH3CO—) is attached.

→ Acetylation of alcohols is done in the presence of bases like pyridine or dimethyl aniline. ‘l’he process of acetylation is used to protect the hydroxyl groups in various reactions. The acetyl derivatives of alcohols are readily hydrolysed to regenerate the alcohols.

→ Alcohols undergo a number of reactions involving the cleavage of bond. In these reactions, the order of reactivity of alcohols is:

→ Tertiary Alcohol > Secondary Alcohol > Primary Alcohol It is important to note that esterification involves the cleavage of the O—H bond of alcohol. This has been established by isotopic tracer techniques. If the reaction is carried out with alcohol having isotopic oxygen O18.

(Which can be easily traced because of its radioactive properties), the resulting ester contains this isotope of oxygen.

→ If the C—O bond of alcohol would have cleaved during esterfflcation, O18 would have gone to resulting water. 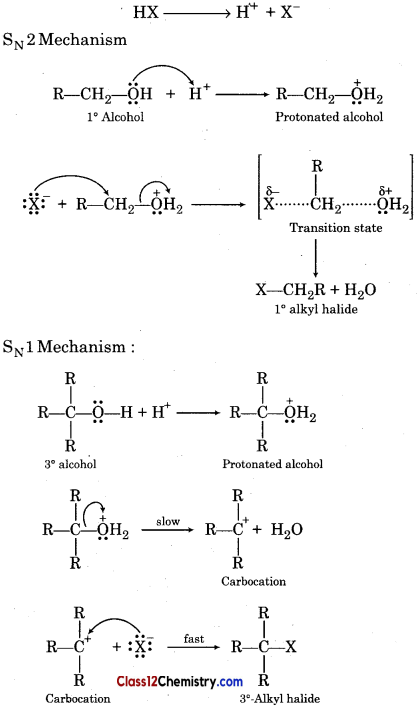 → The reaction of 20 or 30 alcohols by SN 1 mechanism, quite often gives rearranged products which are different from the expected products. This occurs due to 1, 2-hydride shift or 1, 2-methyl shift. 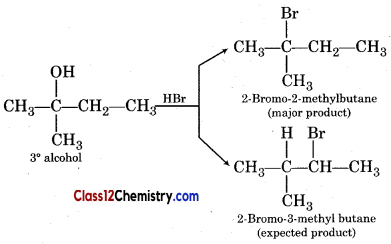 → This is because of rearrangement of the carbocation as shown below:

→ A hydride shift transforms the 2° carbocation into a more stable 3° carbocation and attack by bromide ion gives the observed major product. 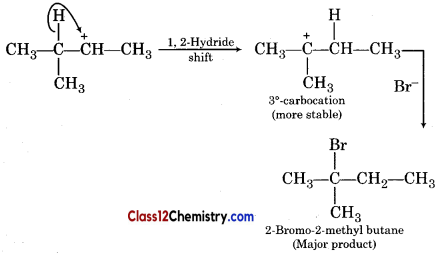 → Reaction with Phosphorus Trihalide : Alcohols react with phosphorus trithalide (PCl3, PBr3, PI3) to form haloalkanes. Phosphorus trthalide is prepared by the reaction between phosphorus and halogen.

→ PBr3 and PI3 are generally prepared in situ by the reaction between phosphorus and bromine or iodine.

→ Reaction with Thionyl Chloride : On treatment with thionyl chloride alcohols form chioroalkanes. This reaction is carried out in the presence of pyridine. This is the best method for the preparation of chioroalkanes. The other byproducts SO2 and HCl formed are gaseous and can easily be separated.

→ Reaction with Ammonia : Alcohols react with ammonia in the presence of dry ZnCl2 at 573 K temperature, to form alkanamine. 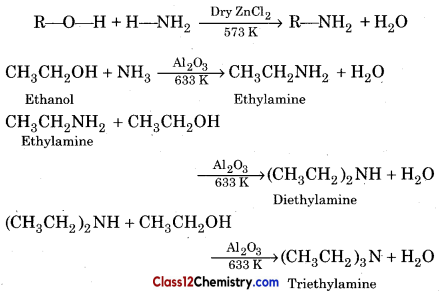 → Reduction : In the presence of red phosphorus and HI alkanols are reduced to alkanes.

→ Reactions due to both alkyl and hydroxyl groups.

→ Reaction with conc. H2SO4 (Dehydration ReactIon) : When alcohols are heated with conc.

→ H2SO4, at different temperatures different products arc obtained. At 413 K in the presence of excess of alcohol, ether is formed.

→ When alcohols are heated in excess of cone. H2SO4 in between 433-443 K temeprature, one water molecule is eliminated from alcohol and alkene is formed. This reaction is known s dehydration reaction of alcohol.

Mechanism : The dehydration of alcohols takes place in three steps:

→ First Step : Due to the presence of two lone pair of electrons on oxygen atom, alcohols behave as weak bases. Therefore they react with strong mineral acids like H2SO4 to form oxonium salt of protonated alcohol.

→ Second Step : The protonated alcohol loses a water molecule to form a carbocation. This step is rate determining step and slow step.

→ Third Step : The carbocation then eliminates a proton to form alkene.

→ Order of reactivity of primary, secondary and tertiary alcohols towards dehydration reaction is as follows:

→ If there is possibility of formation of more than one alkene, then that alkene is formed as major product which has more substituents on double bonded carbon.
Example.

→ When vapours of tertiary alcohols are passed on copper powder, dehydration occurs and formation of alkene takes place.

→ Oxidation : By the oxidation of primary, secondary and tertiary alcohols different products are obtained. The oxidation is carried out by neutral, alkaline or acidified KMnO4 , acidified K2Cr2O4 or dil HNO3.

→ The oxidation of alcohols involves the formation of a carbon-oxygen double bond with cleavage of an O—H and C—H bonds.

→ This type of cleavage and formation of bonds occur in oxidation reaction. These reactions are also called dehydrogenation reactions because these involves loss of hydrogen from alcohol.

→ Oxidation of Primary Alcohol : A primary alcohol is oxidised to form first on aldehyde and further oxidised to form carboxylic acid. Both the aldebyde and the acid formed contain the same number of carbon atoms as the starting alcohol.

→ Oxidation of Secondary Alcohol : Secondary alcohol is oxidised to form a ketone. which have the same number of carbon atoms as the starting alcohol.

→ Ketones are not easily oxidised further but when they react with oxidising agent for a longer time they form carboxylic acid which have lesser number of carbon atoms. 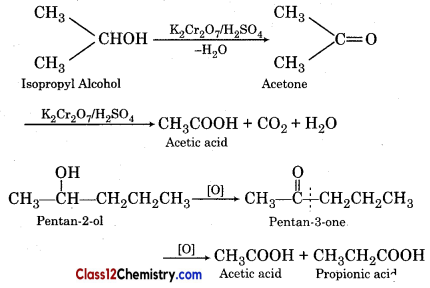 → This oxidation can be stopped at the ketone lavel by using chromic anhydride (Cr03).

→ Oxidation of tertiary alcohols : In neutral or basic medium tertiary alcohols do not show oxidation reaction. When treated with acidic oxidising agents they form ketone and mixture of alkanoic acids. Products contains lesser number of carbon atoms than the starting alcohols.

→ Ascent of Carbon Chain In Alcohols: 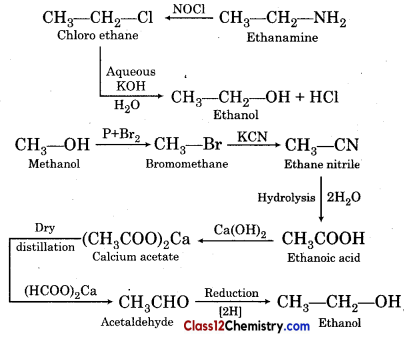 → Descent of Carbon Chain in Alcohol 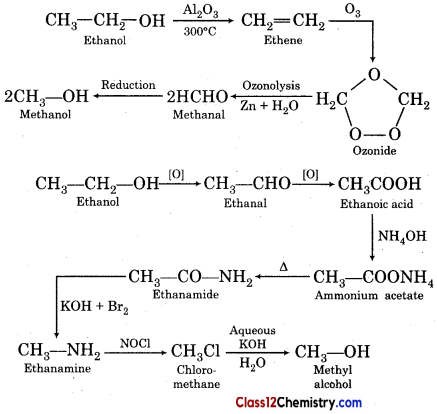